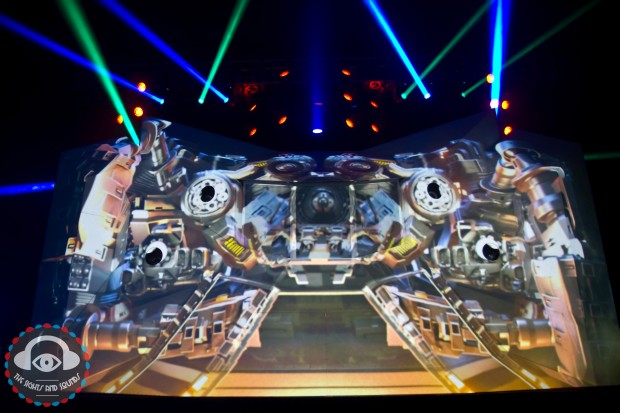 I’m not a very negative person, but I won’t lie, it was pretty darn difficult me to find anything good to say about this performance. Granted, I knew it was an Excision show, I knew it was as The Aragon (one of Chicago’s larger venue’s to house EDM acts), and I knew that the crowd would be, how do you say, a bit on the young side. But you know what I didn’t expect? For the headliner to completely bomb! Seriously, I remember seeing this exact same producer blow stages to smithereens a couple years ago, and now it feels like he’s slowly been converted into just another crowd-pleasing DJ. If I wanted to hear someone drop the five most popular trap and big room house songs, I could save a lot of money and just walk to the nearest bar. But I digress, let’s start from the beginning of the evening.

As the sun was going down on Friday night, the freaks were coming out to play. And yes, I mean the real freaks! Talk about a night that couldn’t be more about the ‘scene’ and less about the music. This was it! Upon my arrival, the venue was already unbelievably packed and ill Gates was manning the decks in front of the sold out crowd. As I looked around at the sea of under twenty-something year old faces, I couldn’t help but feel a bit out of place. But you know what? It didn’t matter, I had come to enjoy one of my favorite dubstep producer’s/DJ’s and I couldn’t care less if the person raging next to me was 15 or 85. I also knew that Dirtyphonics – one of my favorite drumstep/DnB groups – was waiting in the wings. So between that and Excision’s looming appearance, I had my hopes set high.

But alas, because that hope of mine would not last long. While iLL Gates played what some (*cough cough* myself) would consider to be the strongest set of the night, he unfortunately did not receive much of a reaction from the crowd. Maybe it was the lack of lights and visuals, or the fact that his volume was turned way down, I’m really not quite sure. After he wrapped things up, two of the guys (half of the group) from Dirtyphonics took to the stage. Having seen all four of them set the House Of Blues on fire last year, this up-and-down set came off as fairly underwhelming. There were a couple gems mixed in here and there, but for the most part I was not impressed.

Speaking of not impressed, now we get to the main act of the night, Excision. As he settled in behind his giant ‘Executioner’ setup (which is pretty neat by the way, if you’ve never seen it), the crowd dug in and readied themselves for the filth that inevitably lied ahead. Unfortunately, the set never really came to fruition. I understand EDM artist’s desire to expand their boundaries and experiment with new genres, but how dare those same producers claim that this is their attempt to be themselves. Oh really? So is that why you all play the same 5 to 10 generic EDM songs? Is that you being original and true to yourself? Didn’t think so. And I apologize for voicing my frustrations, but it just makes me sick to my stomach sometimes. The lone high point of Excision’s entire set was when he dropped the original mix of “Crowd Control.” Outside of that, it was a horrendous (albeit well-DJed) experience. I almost cried a bit when he dropped Destroid’s “Bounce” into some weird trap remix. It seriously felt like I had just been punched in the gut!

If this night taught me anything, it’s that regardless of the venue, promoters, or crowd atmosphere, horrible song selection can destroy a good set quicker than anything else. I didn’t expect this to be one of the greatest shows I had ever attended, but I also didn’t expect it to be one of the most miserable. Well, you live and you learn. Right? But this writer’s got some serious thinking to do before I venture back into a situation like last Friday night.