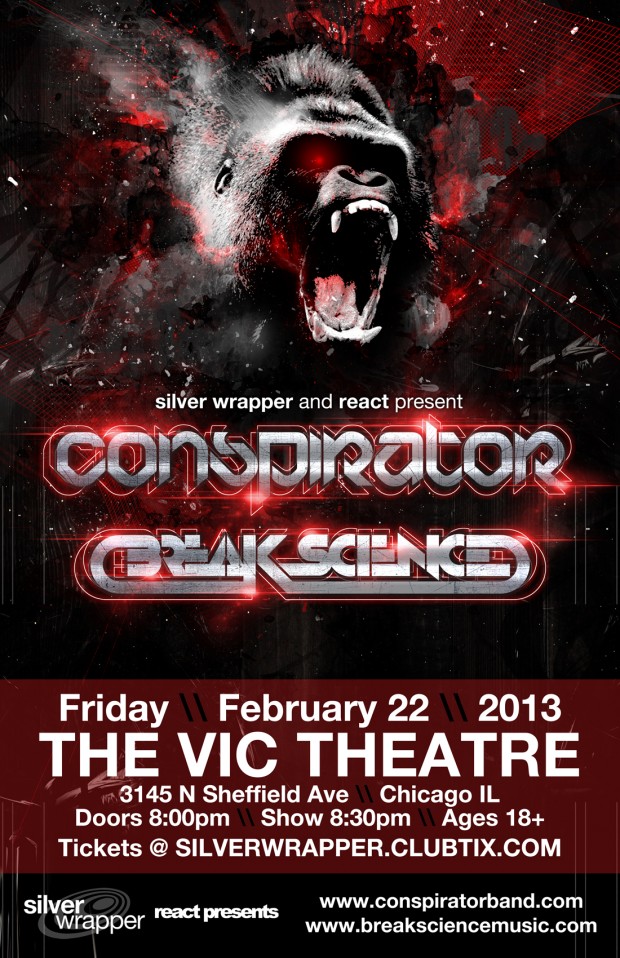 We have two pairs of tickets to giveaway for Conspirator and Break Science at The Vic Theater in Chicago this Friday, Feb 22. To win, head over to The Sights and Sounds Facebook page, comment on our contest post and tag the friend you would bring with if you won the tickets. That’s it! Winners will be notified Friday.

As an out­let to fur­ther ex­plore elec­tronic music pro­duc­tion, Con­spir­a­tor was formed in 2004 by Aron Mag­ner and Marc Brown­stein (key­boardist and bassist for The Disco Bis­cuits), and DJ Omen. With their utmost experience and mastery of the craft, Conspirator pushes into 2013 with more raw power and drive than ever, starting with the release of their new EP Unleashed on January 29 followed by a 28 city U.S. tour that makes a stop in Chicago this Friday, February 22 at The Vic Theater. The group now consists of Marc and Aron, guitarist Chris Michetti, and Pendelum tour drummer KJ Sawka.

Unleashed is a crystal clear demonstration of Conspirator’s heavy, electronically produced core coupled with a skillful and melodic homage to live instrumentation. Electronic rock sensibilities are gracefully smashed into jaw dropping, dance-floor shaking dubstep rhythms to create an effortless fusion of all things deep. This high-impact collision creates an all encompassing, energetic spectacle which will no doubt be used to shock their devoted crowds from coast to coast.

As seasoned producers and touring veterans, Adam Deitch and Borahm Lee, better known as Break Science, have produced and performed with everyone from The Fugees, Wu Tang Clan, and Talib Kweli, to reggae legend Lee Scratch Perry and Miles Davis collaborator, John Scofield. The Brooklyn based electronic duo kicked off 2012 with the release of their second EP entitled Monolith Code, which evokes a wide spectrum of electronic genres filtered through a musician’s lens, all while moving people spiritually and on the dance floor.