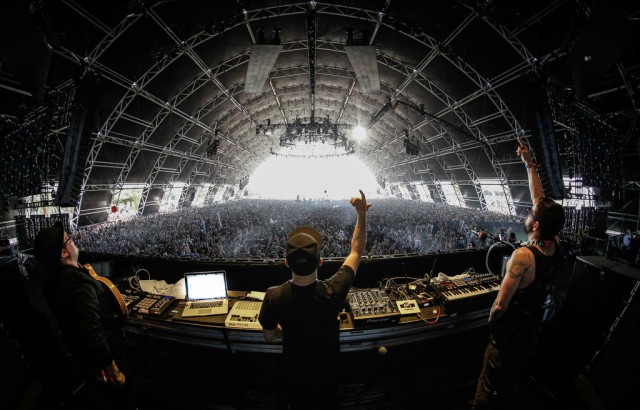 Late nights are nothing new to me. I’ve long since made friends with the moon and the stars shine to illuminate my desktop. The world moves a little slower at night and Earth’s vibrations slip under their covers and settle into a deeper rhythmic syncopation. Naturally I need my music to follow suit. I’ll shelve the festival bangers and romping indie anthems for a smoother shade of electronic rhythm and blues; downtempo chill.

Satiating my late-night appetite for sultry beats is electro hip-hop pioneer Gramatik, who premiered the first single off his highly anticipated Epigram EP during his Coachella set last week. Featuring Raekwon of the legendary Wu-Tang Clan and Orlando Napier, both of whom joined Gramatik onstage, “Native Son” embodies the essence of hip-hop and blues, weaving a story of hardship and struggle on the streets of NY. Weeping guitar and organ stabs punctuate the byline over a laid back hip-hop beat, setting the stage for Raekwon and Orlando’s performances to shine through.

“What is there to say? I’ve been a massive fan of the Wu since I was 14,” says Gramatik. “The very first CD I’ve ever copped was 36 Chambers and soon after that, OB4CL followed. I was in 8th grade. Needless to say, I was immensely influenced and inspired by those albums in all kinds of ways. Raekwon immediately became one of my favorite rappers on the planet, and this was at a time when I was still primarily trying to become an MC. I can go on about this for days, but I’m sure you can imagine how some random kid from Slovenia must feel, realizing he just made a song with a legend.”

0
0   0
previous [FESTIVAL NEWS] Lightning In A Bottle Announces The Village Lineup + Temple of Consciousness Pre-Event In Los Angeles!
next [420 PLAYLIST] The Sights And Sounds Picks Their Favorite Stoner Tracks