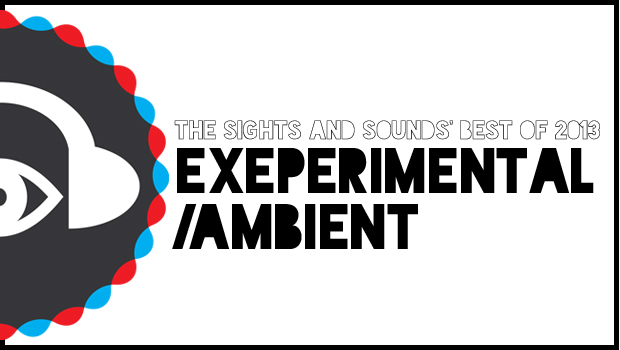 With outstanding releases from both veterans and newcomers, 2013 was a rewarding year in experimental and minimalist music for both long-time fans and complete strangers. The genre seems to be fragmenting into a number of different trends – avante-jazz is back (was it ever really gone?); analog synths are back as well as experimentation with new instrumentation; and crossover successes attracted new attention – but the fact that artists still borrow ideas from one another shows that fragmentation is productive here. It’s becoming something of a stained-glass window: a bunch of disconnected hues cohesively producing a shared meaning. In some ways the genre was so dynamic this year that it makes one wonder if the next few years might signal breakthroughs for the genre. And I have a good feeling about that.

I gotta admit, I find most of Ferraro’s music to be as enjoyable as sprinting into a brick wall. But his “NYC, Hell 3:00AM” was a dazzling journey through a depraved landscape, and “Close Ups” was among the tracks that showed the stratospheric potential of his music. After listening to “Close Ups” I want to go back and listen through his discography again. I think I “get” his music now. And it’s nothing less than brilliant.

“Dream Weaving” deserves a spot on this list for so many reasons. Even in a genre known more for its innovation than cohesiveness, Walter really pushes the boundaries with his compositions for the Electronic Valve Instrument (EVI), a sort of woodwind-synthesizer crossover instrument. There’s simply no other way to make sounds like this, and Walter doesn’t just experiment – he fucking dominates. This is experimental electronic music at its best – abrasive, but almost hummable. Just, um, don’t hum this in public, for your own sake.

I had to listen to “Ophelia Gimme Shelter” nearly a dozen times before I really started to *get* it. Was it a warped, acid-soaked cover of the similarly-named Rolling Stones classic? No, not at all. Was it avante-jazz in the vein of Okkyung Lee’s solo work? Not quite that, either. It’s electronica, but yet there are those haunting, charming classical-style string arrangements. The more times you listen to this track the more it becomes your tractor beam.

7. William Basinski – The Trail of Tears

The master of disintegrating drones continues to bless us with his unsettling, evocative soundscapes. Protip: you want to hear some of the best tunes ever constructed? Find anything made by William Basinski – ever. “Trail of Tears” is 28 minutes (a little short for his style) of deeply and profoundly affective music that you can’t find in many places. Subtlety is the key here: the shifts, undulations, and evolutions won’t slap you in the face. You’ve got to feel this track more than think it.

All the hype surrounding Oneohtrix Point Never’s “R Plus Seven” is well deserved. Each of the tracks on this album is so stellar that it’s hard to pick one as the “best,” but the 3:07 of “Problem Areas” neatly encapsulates what’s so spectacularly awesome about the album: fast, quirky synths, samples that take you by surprise, and ambient segues between sections. It simultaneously rewards and challenges the listener; and ultimately resolves by drawing multiple themes into resonance.

5. Julia Holter – In the Green Wild

Everything about this track (and the album from which it came) is fantastic. The thumping, jazzy bass; the fact that she’s so relaxed in her songwriting that the well-earned chorus doesn’t even begin until after the half-point mark; her erudite yet accessible artistry (in songwriting, arrangements, even her videos); and the fact that she followed up last year’s album so wonderfully. “In the Green Wild” shows that she’s not even close to expiring her creativity – her best is indeed just beyond the horizon.

“Psi 847” continues Eliane Radigue’s long tradition (releases since the 80’s, but producing music since the 60s) of making long, minimal, drone-y analog electronic music. She has stripped this song of any flourishes and, in the beautiful fashion only minimalism can accomplish, shaves the idea down to its most basic, rudimentary elements. She shows in this track how to creatively take a single thought and explore it from dozens of angles, each angle revealing something new and interesting about that idea.

Michigan-born noise masters Wolf Eyes devised a nearly flawless track in “Chattering Lead.” From the heart-thumping, arrhythmia-inducing drumming to the irregular fractured background and the wailing guitars, it all somehow makes sense when brought under the spell of the synths. It doesn’t so much shock you as mesmerize you (I guess it could have been hypnosis by the 30th listen-through). The track oozes such confidence that you’re surprised they felt the need to end it at all.

The Knife can seemingly master any genre they desire, and Shaking the Habitual was a great record no matter how you slice it. “Fracking Fluid Injection” was a stand-out track masterfully paying homage to past experimental/ambient works (most notably Aphex Twin’s “Cliffs”) and commanding your attention for just under 10 minutes. The track’s title – and the tension of the track – draws upon our current historic moment’s dread and sense of hopelessness that our technology, far from saving us, may in fact signal our own demise.

Hecker’s 2013 Virgins was a major step forward for experimental electronic music as it knocked you flat on your ass and made you seriously reconsider your life choices, yet contained elements that fans of any genre would understand – dare I say, enjoy? Virginal II was the epitome of this balance and the apex of the album. Reich-esque pianos layered over complex textures, but egads, it kind of stuck in your head, too. Uncompromising and memorable, this was easily the best experimental electronic music of the year.