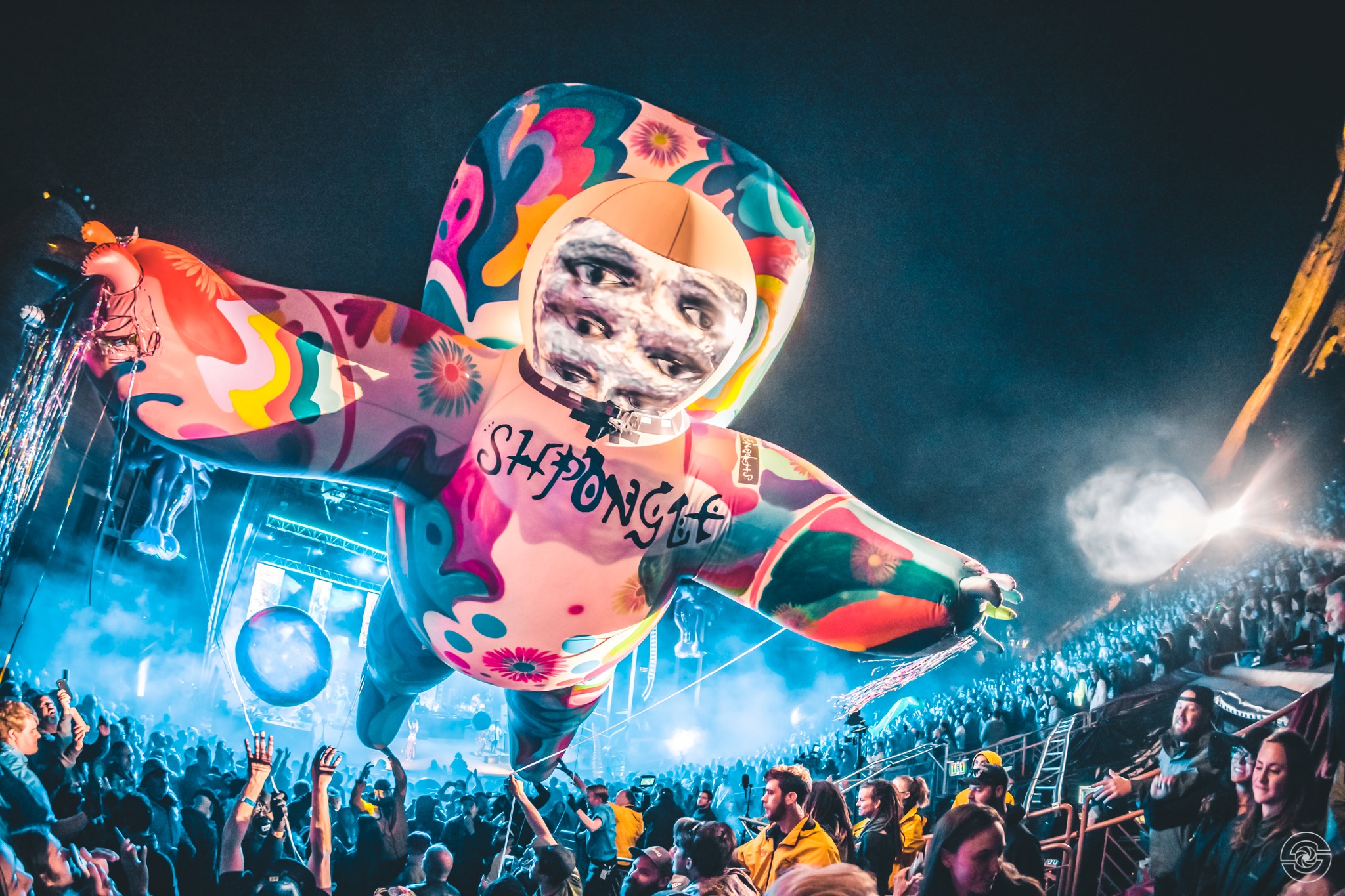 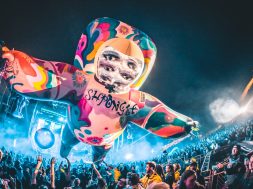 Shpongle is a downtempo psychedelic project which has captivated fans around the world this past decade with its ambient and texturized psybient sound and cutting-edge tour concepts. Composed of Simon Posford (AKA Hallucinogen) and Raja Ram (one-third of The Infinity Project), Simon takes care of the production, instrumentation, and programming, while Raja Ram is the flutist who contributes broad musical concepts to the project. They DJ separately and together, Simon having just completed 52 shows in the USA touring with a visual extravaganza known as ‘The Shpongletron.’

Dongle and Mongle are the only two other words rhyming with Shpongle… a strange hybrid of electronic manipulation and shamanic midgets with frozen digits squeezing the envelope and crawling through the doors of perception, finding a new pair of dice, extra numbers, and colors of infinite expanding bubble filled with a bizarre, strange world of dripping hallucinatory wallpaper, a garden of earthly delights………..Shpongleland…..a place of well being, and reflective surfaces, morphing like an anaconda’s skin and shimmering like a million colors changing speed, at fifty fathoms.. truly unfathomable like separating water from its wetness. That’s where Ineffable Mysteries unweave…

Tour dates for the Simon Posford Shpongle Droid US Tour with Android Jones kicked off on November 23rd, with each event featuring an array of artists, visuals, performers, and more!

Lyons born Independent Artist Android Jones began studying art at age 8. He graduated from Lyons High and went on to Ringling School of Art and Design in Sarasota FL, where he trained in traditional academic drawing/painting and animation. He interned at Industrial Light and Magic and worked as a concept artist at Nintendo. Upon leaving Nintendo, he founded Massive Black, a concept art company based in LA. In 2005, Android began his career as an Independent Artist. He is a pioneer of digital painting and projection art, continually pushing the edges of humans, technology, and art. He has projected on the Sydney Opera House and worked as a commissioned artist for the Royal Family of Abu Dhabi. A long standing member of the Burning Man community, Android has traveled the world exhibiting his work and has participated in festivals on 6 continents. He currently lives in Lyons, Colorado with his beloved family and farm animals.

Australian Music Producer and Founder of Merkaba Music, Kalya Scintilla has always had a love for music; playing in garage bands, banging on drum kits, spinning vinyl in the night clubs of Sydney and getting down to funk! Kalya had a knowing one night listening to one of the most profound pieces of visionary music from the legendary Herbie Hancock, that his soul’s mission was to make music his life’s devotion. He signed on with Zenon records in 2009 putting him on the map inside the Psy-trance world with his first project, Merkaba. His second project, Kalya Scintilla made it to the top ten on Addictech charts in the same year and by 2011 he was touring the U.S. west coast. Kalya Scintilla took hold in the United States as dance floors were all abuzz about the masterful style in which Kalya was throwing down squelchy funky grooves that were uniquely deep and hypnotic. In 2012, he began collaborating with artist Eve Olution inside the album Open Ancient Eyes. New elements took root as these two worked in the studio to add detailed nuances to weave the current mythos of our time within the music. This album is the first of three inside a trilogy dedicated to our human journey, this planet, and our connection to creation itself. Today both Kalya Scintilla and Merkaba are renowned throughout almost every continent on the planet and the popularity of both projects are growing as more & more people are connected with the deep seeded intention of every song.

Since 2006, Euphonic Conceptions has been dedicated to curating events featuring fresh directions in music and art. The goal is to develop, support, and sustain a culture that can birth groundbreaking artists and allow them and the community they represent to flourish.

Keyframe caught up with Dave Sheldon of Euphonic Conceptions to discuss its history and the upcoming ShpongleDroid tour, which includes a San Francisco event with guests Kalya Scintilla, Plantrae, and DJ Dragonfly!

Please tell us about the history of Euphonic Conceptions.

We started in Boulder, Colorado in 2006…. our first show was with Bassnectar and the Glitch Mob after STS9 headlined Red Rocks for the first time. I booked Bassnectar on MySpace for $900. The show was at an illegal grow warehouse. We grew from there doing more late-night events and eventually ended up touring with STS9 putting on after parties in most markets that they played in. This grew into doing our own standalone events rather than just afterparties. When Josh moved to CA, I stayed in CO, and we now do regular events in each market while still doing other stuff around the country when it makes sense.

Have you worked with Shpongle in the past?

Yes, we have been working with him for 10+ years off and on… the early shows were STS9 afterparties in Colorado but we have done shows with him all over the country at this point.

What inspired the ShpongleDroid tour?

We have always loved Android Jones’ visuals, and of course Shpongle’s music, and it always seemed like a natural fit. We actually put the whole thing together over about a week in September – it was kind of crazy how quick it came together, and on short notice too. I basically heard that Simon (Shpongle) was going to be in the country, and put out some calls to our promoter friends in various markets to see if we could do some weekend shows. Next thing you know, we have 7 shows booked in different parts of the country. We actually might be adding a couple more cities now too 🙂

Tell us about the theme of RE:CREATION for the event.

We have used this name for a ton of parties over the years, it’s sort of a triple entendre. RE: could mean “regarding” in the classic email-reply format, and be read as “Regarding Creation.” Of course, another reading would be simply “re-creating” a really cool vibe for a party that we have been seeking to achieve and refine… basically top-notch production and talent throughout an environment geared towards multi-sensory and interactive overload. Live painters, art galleries, aerial performers, interactive art installations, vendors, info booths, and whatever other cool and weird shit we can cram into the event space. At the end of the day we are trying to throw a really fun party – “recreation” meaning “recreational,” a third way you can read the RE:CREATION branding.

What do you hope attendees get from the event?

The whole idea is that this is more than a concert, and the hope is that attendees not only have fun but take away something meaningful into their everyday lives long after the show is over.

Outside of music, what other types of artists will you be showcasing?

Tribe13 will be running an art gallery in the beautiful Midway gallery space, which is perfect for our purposes. They will also be bringing live painters. As I said before, aerial dancers, interactive art environments, vendors, info booths, and more… we are going to try and cram as much cool shit into the space as we can!

For other tour dates, go to: https://www.facebook.com/pg/ECpresents/events/

Listen to “Brain in a Fishtank” below.