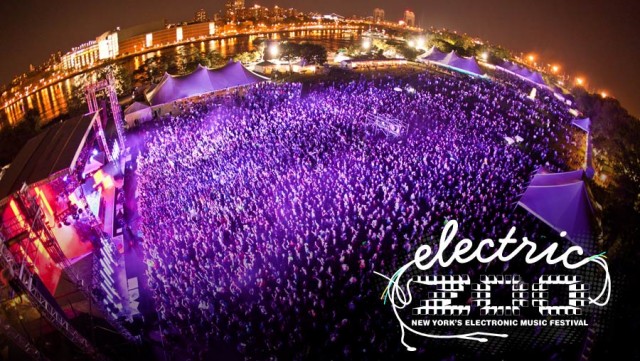 Despite the third day cancellation, here are Seven Things that were still awesome about Electric Zoo 2014.

1. Nicky Romero’s Set
Lately there’s been a bit of a creative lull in main stage sets from many major artists. Not Nicky Romero. Not at EZoo. He’s always been good, but Friday night, he murdered it, taking on a more electro-progressive and aggressive style akin to Swedish House Mafia and Alesso post-Coachella 2014. That first night of the festival, we saw Nicky grow up. (Should we call him Nick now?) He still dropped fan favorites like “Home”, his collaboration with Nervo, and the heart-wrenching “Legacy.” The whole audience belted out the words alongside Krewella and I swear in that moment, between the lyrics and the LED rain backdrop, we would have been OK if the sky just opened up and poured down on us all (this wish would be retracted later…)

2. The Open Space
If you’ve ever been to the likes of mega-festivals such as Ultra or EDC, you know space is virtually nonexistent as you’re crowded like sardines. This wasn’t the case at EZoo. I’d be curious to know if Made Events purposely undersold, but if they did, I was grateful for it. Randall’s island is a 520 acre splash of greenery, far enough to feel removed from Manhattan but close enough to display the nation’s most recognized skyline as its backdrop. Wanna dance? There was plenty of room to rage in the back, the sides, and even in the front.  Need a break? You could lie down on the hillside and still get a view, or cuddle up next to the life-size animal art installations. Just be prepared to move every 10 minutes when someone wants to take a picture mounting your pink rhino.

3. The really chill, friendly, good vibes
Let’s be honest here, we New Yorkers are known for many things, but our patience and friendliness is not one of them. We live in one of the most populated cities in the world and pay a fortune to do so. We shove past people on the sidewalks, we don’t look people in the eye on the subway, and if you don’t live here, prepare to feel slightly unwelcome. New York’s a dog-eat-dog world, and this makes us cold and closed off as a matter of survival.

I’ve never assimilated well with the New York rude ‘tude, and so I was pleasantly surprised at the friendliness and consideration I witnessed at EZoo. Strangers gathered together for light shows or to dance in unison when their favorite song dropped during a set. The number of people I met and actually spent time talking with made me feel like I was back at freshmen year in college. And people….smiled! Even in line for the coed bathrooms, which were almost always crowded and smelly, people were relaxed and made space for others to walk by- I even saw a few guys give their turn to girls behind them.

Pretentious and bitchy New York City was just a bridge away, but on Randall’s island, we were in a peaceful and kind utopia. Manhattan was like the mean girl in high school you outwardly admired but inwardly loathed, whereas EZoo was the chill, hot hippie chick who just moved from California and hung out with everyone.

4. Finally seeing Armin…364 nights after we were meant to.

Perhaps this is mostly a personal win, but last year’s EZoo was supposed to be THE FIRST TIME EVER I was going to see Armin van Buuren live. One of my best friends flew all the way from California for the festival, and we only bought Sunday passes. Our heartache was shared with thousands of fans when they announced the tragic news and cancellation.

I’ve fortunately seen Armin many times since in the year past, but that didn’t make his set any more epic or special. Midway through, he announced to the crowd, “I was so upset I couldn’t play last year, but I’m here now!” The crowd roared and cheered as he dropped into an epic set of euphoric trance.

5. “Baby Got Back” dropping in the middle of TJR’s set

I’m normally not a fan of jacking mainstream records into a set, but this was done with finesse. Right in the middle of a buildup, Sir Mix A Lot’s one hit wonder circa 1992 came blaring through across Main Stage East. The big booty anthem was greeted with cheers and suddenly, the entire crowd broke out into some insanely awesome twerking.

At EZoo, you didn’t have to pay almost double for VIP- for waiting in line and snapping a group photo, you earned VIP-fo-free. T-Mobile offered a #MusicFreedom VIP stage for festivalgoers willing to buy into some corporate sponsorship. (Admittedly, I first thought it read “#MusicalFreedom” and was like whoa Tiesto’s label is here? #falseadvertising #IMblonde)

The T-Mobile VIP stage was further back, but still offered great views of the main stage, free lemonade, and a LED prism mirror, which proved highly entertaining when festival goers, high as kites, got all googely-eyed and pressed the buttons, not realizing their photo was being taken and plastered on a nearby plasma screen. Say “Cheese!”

And a few things that weren’t so awesome…

1. The Bathrooms
I know,I know; Porta potties go together with festivals like taxes in April- unwanted in a time of pleasantry, yet a known fact of reality. But for the love of sanitation, could we design a better system? The Porta potties get so bad that at night, you’re honestly grateful you can’t see shit inside—pun intended. I understand most festivals are held at remote places outdoors, but even at Mysteryland – in the ass end middle of nowhere – they installed flushing toilets and usable sinks in a clean and respectable double-wide. Granted, this was in VIP, but I say this is America, people! Everyone should have the right to relieve themselves in a bathroom not crawling with E.Coli, with soap and Charmin Ultra for all.

2. The same. Exact. Setup.
Wait, am I in a time warp and arrived back at Mysteryland? On second thought, I think I’m at the Hudson Project.

No, I’m at EZoo, they’ve just literally used the same tents and stages that have been used at every other festival in New York this year.

Not that the pink big top and Spiegel tent aren’t awesome, but after seeing them three times in one summer, they kind of lose their luster. Namely because it’s just such apparent cost-savings effort to the point of laziness!  Festivals are often judged on their production value – themes, set designs, and stages are part of the hype that draws crowds back year after year. No festival is exactly the same, so why make it appear that way? And with so many festivals to choose from nowadays, festival organizers need to up the ante more than ever.

EZoo is all about animals coming out of the concrete jungle; how is a 20th century mirrored tent or a school bus relevant? Made Events, I’m sure between the 85,000 attendees and your set designers, we could think of some better stages. Our people will call your people, unless yours are still asleep.

Maybe Electric Zoo just isn’t meant to have a third day. Day 3 was cancelled yet again; thankfully, this time it was due to thunderstorms and lightning instead of drug overdose and death. I awoke late on Sunday, and rushed to get ready to catch The Chainsmokers in time by 3pm. However, when I ran outside to catch my Uber I almost didn’t leave the building when I saw it raining like Armageddon. Receiving the news on my way over I was completely bummed – there were so many acts I was looking forward to seeing that day! But despite the Twitter outrage, I had to agree with their decision. It ended up being just sad luck and irony that after they announced the remainder of the festival was cancelled, it rained but not one drop the rest of the day… at least we’re getting refunds, and many of the artists expected to play that day found venues across the city to hold ragers at Sunday night.

Which leads to my 7th and last point why EZoo was still awesome:

7. The impromptu Sunday after parties

We were all disappointed, sad, and even angry when Made Events announced Day 3 was cancelled, and artists shared in the sentiment. Twitter feeds went wild as artists expressed to fans their plan to still make the best of the day. And many did. Artists like Mat Zo, Milo & Otis and What So Not held a show to a packed crowd at Slake, charging only $20. Tickets sold out in 7 minutes. Much love to all the artists who reminded us that at the end of the day, it truly is about the music.

All in all, Electric Zoo exceeded my expectations. While New York may still not take home gold as the state for music festivals, my hope has certainly been restored.

But just to play it safe, maybe they should only make EZoo two days next year.