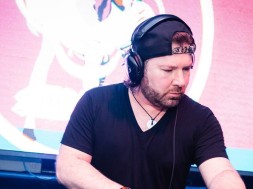 House DJ/producer Shiba San is finally getting the attention he deserves.

After nearly 15 years in the music industry in France, Shiba gained global popularity with his Dirtybird-released hit “Okay” in 2014, which has since been played by a variety of artists across genres due to its deep, irresistible bassline. It’s one of the few tracks that have transcended the divide between EDM and underground house/techno. It was played by the likes of Diplo in his Spring Awakening set and Martin Garrix in a BBC Radio 1 Essential Mix. More people were exposed to this exciting style of house than ever before.

Shiba San took advantage of this popularity and has been touring seemingly nonstop since. After making appearances at Summer Set, Spring Awakening, Freaky Deaky and The Mid last year, he’s back in the midwest once again with appearances at Summer Camp and Mamby on the Beach, along with other festivals across the world.

After prior releases on CUFF, Dirtybird, and Basement Leak, Shiba San’s first release of 2016 comes on Saura. Titled “Got Drunk,” the title track is a tech house banger filled with weird synths and chants.

The other Shiba San original, “Hard Day,” is more similar to his earlier work. It showcases his signature g-house/deep house vibe that sets him apart from virtually every producer.

Also on the EP are remixes from Emanuel Satie and German Brigante, both of which are worth a listen. Shiba San proves why he’s one of my favorite artists on this release. Just like his live sets, his music truly never disappoints.

0
0   0
previous [DUBSTEP] Krimer - Blow Up! EP
next [GOODSEX TIPS] #Afterlife Tunes Up Summer Lineup with Solidisco + Bottle Give Away