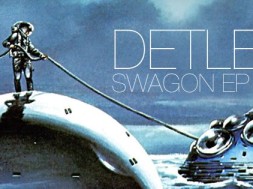 The Swagon EP is finally out.

Spoiler: This shit is hot.

Detlef is on a hot streak these days. His songs have earned him support from the likes of Marco Carola, Matthias Tanzmann, Yousef, Hot Since 82, and Jamie Jones just to name a few. The Kinky Tail EP gained notoriety when major DJs began playing his tracks in clubs and at festivals. Now, Detlef is back with his sophomore EP Swagon and it’s massive.

The greek tech house superstar’s recent release has been played by label heads like Jamie Jones (Hot Creations) and Lee Foss (Repopulate Mars,) Claude Von Stroke, Green Velvet, and Jamie Jones. It seems like DJ’s all over the world have been dropping the bodacious tracks in their sets. Certifiable fire? We certainly think so.

Detlef converges underground influences with the bass heavy rhythms that have become characteristic in DJ sets from Lee Foss, Get Real, Jamie Jones, and Hot Since 82.

The EP features three tracks, all seemingly rooted in pounding bass lines and funky vocal samples, AKA the hot shit that Get Real utilizes in the beginning of their sets. Self titled track ‘Swagon’ has already garnered over a thousand likes on Soundcloud in just a few days. The EP converges techno, old school house, and funk; it is a glimpse into what may become commonplace in club sets in 2017. With support from major labels and DJ’s Detlef is one of the hottest acts to keep an eye on in 2017. Be sure to check out his tour dates below.

Detlef… we salute you.

TSAS Five Acts Not to Miss at Governor’s Ball 2017