YOU KNOW THAT ARTIST BANKSY?

The one nobody really knows, but who does that stenciled graffiti art that everybody’s seen.

Well he’s doing this thing. It’s cool and mysterious and here are a bunch of photos.

OK. We’ve heard this all before.

THIS TIME HE’S BACK. WE’RE NOT ONLY ALL EYES, BUT ALL EARS ON THIS ONE.

In his recently announced fourteenth-month long project, The Walled Off Hotel, the artist has unveiled a full-service art hotel located in the West Bank city of Bethlehem with what he’s called “the worst view in the world.” 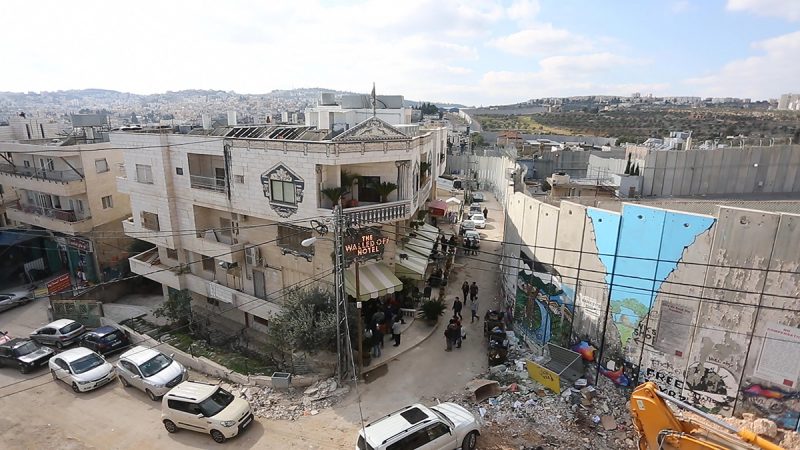 What could be better?

How’s that for ya?

According to Banksy’s site, or what seems rather like an art piece in itself, original scores have been created and confirmed from Massive Attack’s 3D, Trent Reznor, Atticus Ross, Flea, Hans Zimmer, and more. They’ll be played over a mechanical, remote controlled piano in the hotel’s piano room and a pre-recorded “concert” will also air every evening at 9 p.m.

The hotel’s opening coincides with the centennial of the British capture of Palestine. Although, per the “Questions” section on the hotel’s site, Banksy didn’t receive a penny of outside funding for the project. Not only so, but the hotel’s not aligned with any political movement.

It seems Banksy hopes rather to tell the story of the West Bank wall, allowing visitors the opportunity to discover their truth themselves.

The hotel’s books open March 11 at 9 a.m.  GMT for those serious about checking out the work or reveling in the bliss of the sweet, sweet piano bar’s tunes. With an opening party featuring a remote performance from the legendary piano man, Elton John himself, we look forward to hearing the live scores.

Who knows what’s to come?

WITH AN ARTIST LIKE BANKSY, YOU CAN NEVER BE TOO SURE.

Love him or hate him, that’s one thing he’s inarguably mastered.