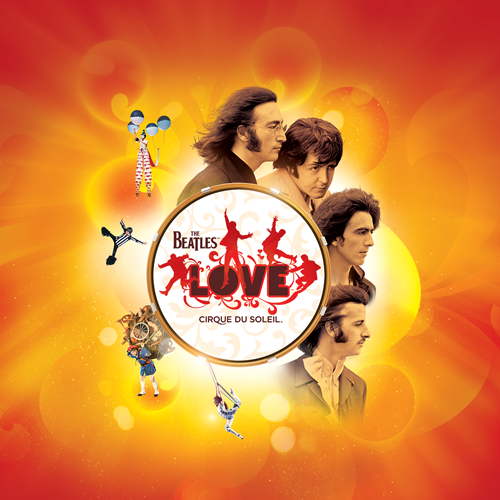 It’s been 50 years since the legendary foursome of John, Paul, George and Ringo stepped foot onto American soil, forever changing the landscape of music as we know it. Thousands of artists we hear on the radio everyday have been influenced by The Beatles and millions more have been touched by their powerfully emotive lyrics and mind altering melodies. They were a force so powerful and so influential that no one has yet, and perhaps never will, reach the heights these four men were able to ascend.

There are countless movies, songs, tributes and shows that have been made in celebration of the music and ideas The Beatles exuded, but when you have the legendary Cirque Du Soleil creating a show in your honor, well, that’s about as great as it gets. I’m talking about The Beatles’ LOVE, performed by the infamous circus outfit at Las Vegas’ Mirage. It’s one show that I’ve heard nothing but great things about, and one show I have been dying to see. So in celebration of the 50th anniversary of The Beatles coming to America, The Sights and Sounds is teaming up with Cirque Du Soleil to give you some exclusive LOVE gear so you can flaunt your passion for The Beatles all day long. We will be giving away five gift packs, each containing:

To enter for your chance at one of these five gift packs, head over to the official contest post on our Facebook page and comment with your favorite lyrics from The Beatles and why it’s your favorite. We will randomly select five winners on Friday, September 5th at 4pm. Good luck!

And if you have the chance, head to Las Vegas and celebrate the 50th anniversary of The Beatles coming to America with LOVE as Cirque Du Soleil combines their magic together with the spirit and passion of The Beatles as never before, only at The Mirage in Las Vegas. So what are you waiting for? Get your tickets now at Cirquedusoleil.com/LOVE and enjoy the special anniversary offer with tickets starting at $60.