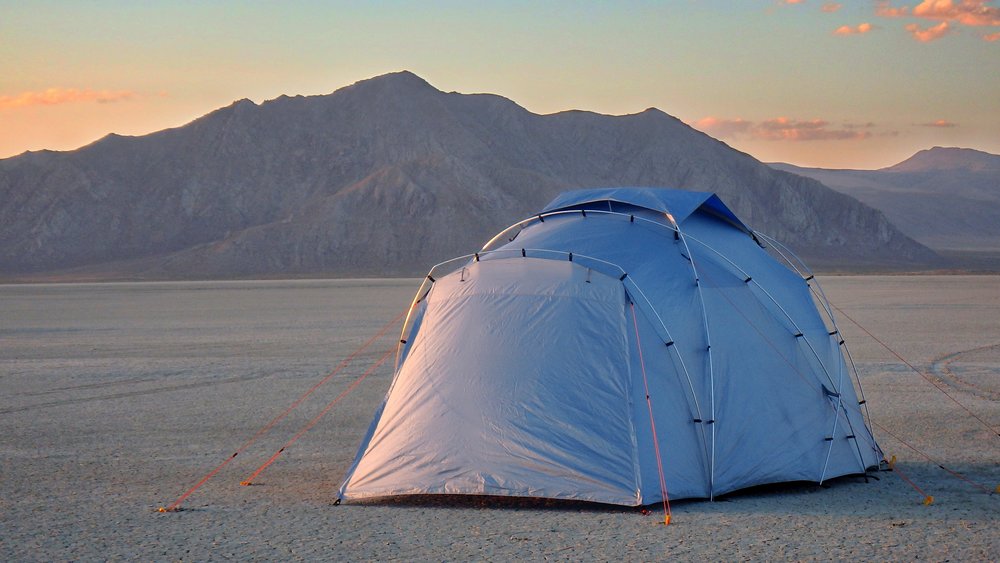 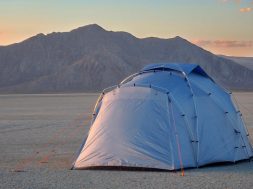 “Whoa, it looks like an alien fortress! What is that thing?”

A common remark from the dropped jaws of many campmates and guests who were abducted by the shiny, tin foil-looking exterior of my newly acquired tent. For two weeks in Black Rock City I called this ‘thing’ home: The No Bake Tent.

Built with purpose, The No Bake Tent shines in it’s ability to reflect Solar radiation and other science-y hot stuff. Additionally it is designed to withstand heavy wind, block out light, and even takes measure to prevent dust infiltration.

Owner Sean Davis birthed his idea with a Kickstarter fund to – well – kick start the project and has since developed a top contending tent that stands out from it’s competitors. 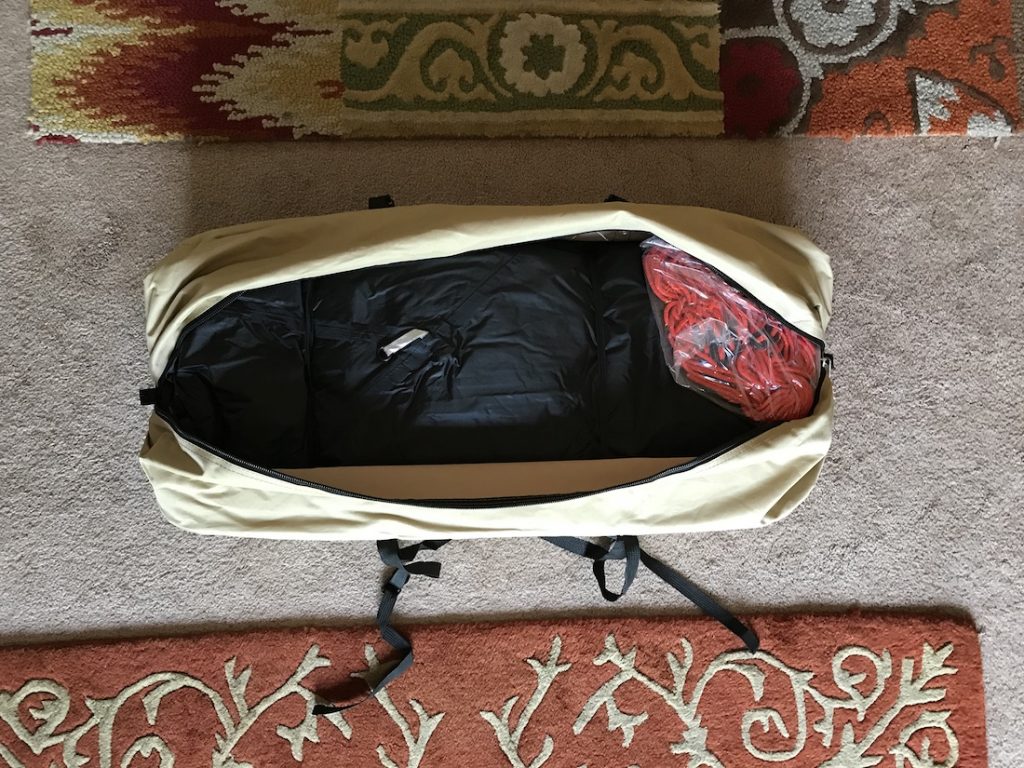 I had been waiting by the door, pacing back and forth, impatiently waiting for the tent to arrive the week leading up to Burning Man. Yes, I ordered the item last minute and still got it in ample time thanks to the on-point shipping from Sean!

Filling every usable amount of space in the box was my No Bake Tent. Pristinely packaged and zipped up as tidy as I would ever see it. The contents inside the carrying case were neatly arranged and folded to perfection.

I didn’t want to unveil it as I knew there was no chance it would look so pretty again…especially after the Burn. 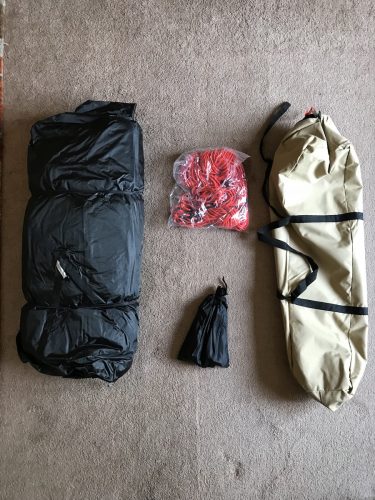 Before taking a new item such as a tent out for use (especially in the middle no nowhere – Black Rock City) ALWAYS, and I mean ALWAYS set it up at home first.

This is precisely the reason why.

First order of action – time for a test run.

Uh oh…THERE AREN’T ANY DIRECTIONS. Everything was absolutely perfection and then my giddy spirit of excitement came to a crashing halt. A brief one however.

I take partial accountability for my lack of research because there is a rather informative link on the website on how to set up your No Bake Tent.

There’s even a decent video.

But many folks might not have been so diligent as to do a test set up. Had I arrived at Burning Man with a brand new tent and tried setting it up in violent gusts of wind and dust…I would have had an exponentially more difficult time.

Ain’t no service in BRC and that would have been a major bummer without any directions.

Fortunately the setup is quite intuitive, in part.

Without directions, one can likely figure this out with some finagling.

The first time you pop up your new, badass, spacecraft tent, you’ll have to attach the tent to the rainfly after it is hoisted. Once pieced together it becomes an all in one tent + fly with its own dope shade (though extra shade is still nice…we’ll get to that). 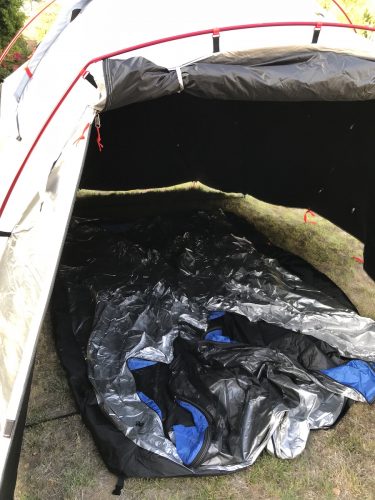 This became one of my many favorite features right away. It allows for easier setup every time after the first and spares you the tedious task of clipping all the dang pieces together.

Plus, when it comes time to pack away it all goes together in one unit and then goes back up in one! It may not be as convenient as a Shift Pod, but for such a massive tent it packs down smaller. No really…

This thing is huge!

Sharing the space with my girlfriend for the duration of Burning Man and then some (build week) was spacious and comfortable. We laid out two futon mats, had a nice little dresser, some fun string lights for ambiance (wink wink), a fricken full sized carpet for flooring, boxes of clothes, and room to spare. 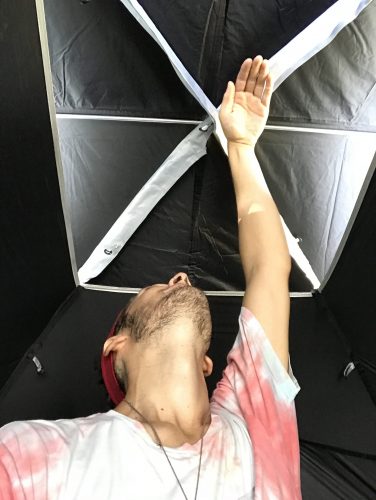 Outside in the front vestibule were more crates, and plenty of room to fit a porch basically. Though we mostly utilized it as a staging area before entering mostly dust-free inside.

The rear vestibule, only slightly smaller, was home to extra food and water that we wanted in the shade. Having entered and exited from every corner several times, the zipper held up quite well too. The dust made them catch at times, but that’s almost to be expected. Otherwise smooth action and ease of opening on the sturdy zippers. 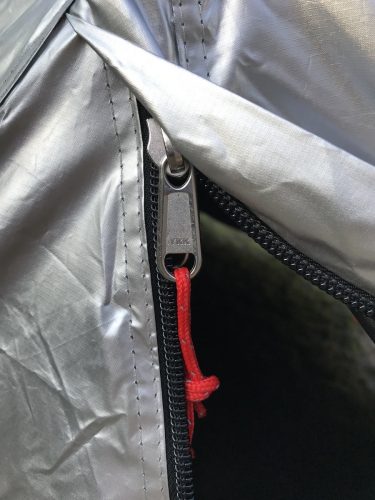 Need I say more? The reinforced seams make this puppy seemingly dust free. We went through no extra effort aside from kicking off out shoes to keep out dust and honestly, it stayed out damn well.

Having the fly act as a sort of first line of defense for wind and dust atop the well-crafted seams was super effective. Keeping everything zipped up between use was definitely needed though.

As recommended on the website, we invested in some filter pockets, which seemed to help a good bit as well.

There is tons of ventilation in this tent and some of those pockets have a spot for filters! Sure, the dust makes its way in, but simply as a visitor, not an intruder. 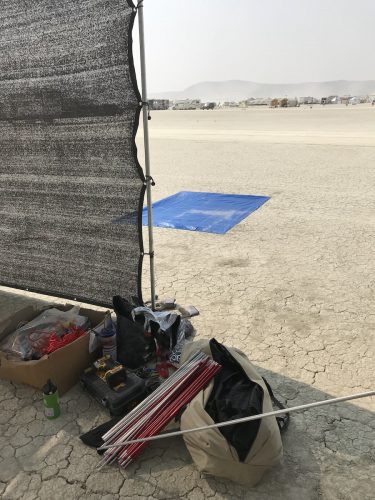 How did it hold up?

The dust storms ain’t got nuffin’ on the No Bake Tent. Seriously. Staked down with lag screws and backed up with well-placed guy lines, the tent stood its ground and didn’t even bat an eye.

Unfortunately one of the main guy line points (where the red poles cross and make an X) tore rather easily while I was securing a line, but it’s hard to say if that was my own fault or not honestly. A few stitches popped, but that’s an easy fix. Worth mentioning, but hardly concerning.

I would still describe the tent as nothing short of sturdy, burly, and ready to take a beating in harsh environments. Though I can’t speak to its performance in rain or snow, it seems like it will be protected just as well.

But let’s get real. We’ve read all this way to find out the question that is on everyone’s mind. Is it cool? Oh yeah. It’s the beez knees. Niftiest tent on the block!

Not that kinda cool? Oh! Yes! That… 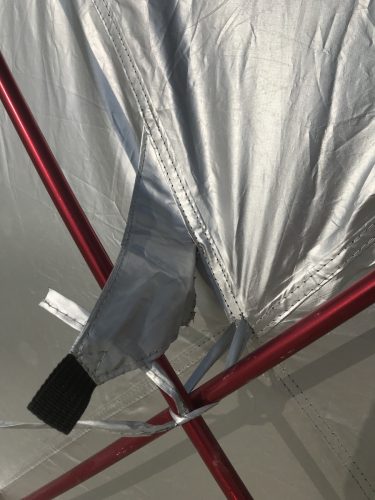 I’ll start by saying this: I didn’t optimize the capabilities of the No Bake Tent.

We brought a giant rectangle of Aluminet for shade

But we didn’t bring a swamp cooler!

Despite not coming equipped with arguably the most useful piece of equipment to cool you down, we slept in just about every day. Using a little battery powered fan on the inside with a vent opened for some circulation went a long way surprisingly.

Sean put a great deal of effort and research into this product. The technology is insane and he went through something like 14 prototypes before arriving at the final product. See the details here.

It really does stay cool throughout the day but there isn’t any sort of enclosed structure that is going to stay completely cool in this type of heat without some help.

At some point you might just have to get out of there. 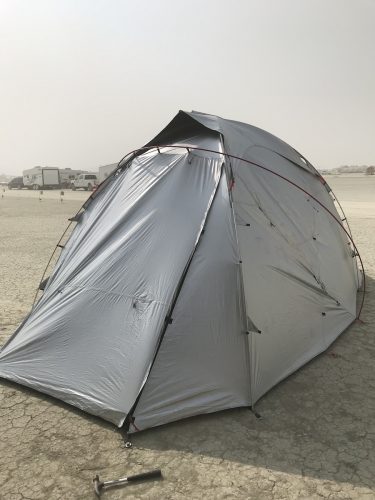 Luckily this year was not a miserably hot Burn. For hotter days I would have really, really benefitted from some proper cooling. Because I think that’s truly where this tent shines. Had we been sleeping in a regular camping tent we would have been roasted for sure.

Just having the reflective fly around us with some extra shade above was unbelievable though. On the other hand, we were insulated throughout the night too. The construction of everything is rather thick, which likely contributes to it’s stability, burliness, and ability to block out the sun.

Pitch black I tell you. Pitch black! Make sure to have a headlamp or know where your interior lighting is at because the No Bake Tent is a total blackout.

When you’re just come back after sunrise and the fire ball in the sky is on full blast, you may rest easy knowing that you can basically crawl inside a giant sleep mask for a nap.

If you’ve been to Burning Man or even been camping, you know how special this is. 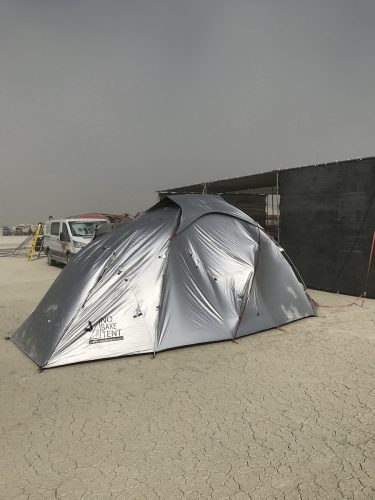 To say the least – I love this badass tent so much.

Once you familiarize yourself with this beast of a tent, the ins and outs become quite easy to maneuver. Setting it up is a walk in the park after the first go. Packing it down is surprisingly simple as well. I actually got it back into the bag!

It stands up to the sun, its toasty rays, and other pesky elements like wind and dust. The shade it provides is all inclusive. In most scenarios outside of Burning Man, you wouldn’t even need any additional shade.

The No Bake Tent is ready to take a beating one festival, camping trip, or backyard test run at a time.

If you want to love one too, try and score one here. They sell out seasonally as you can imagine so stay on your toes, because you can do that inside this tent. Stand on your toes that is. 😉

Explore the No Bake Tent on the official website.