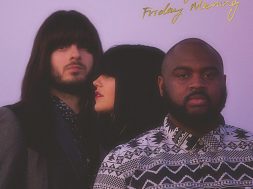 It’s hard not to be impressed when every song sounds like a love song.

On January 26th, the Thai funk-inspired, Texan-trio Khruangbin will be releasing their sophomore album, Con Todo El Mundo, and when every song sounds like a love song it’s hard not to be ridden with anticipation.

Khruangbin’s hymnal passages are a significant departure from what’s commonly presented in the indie rock realm, let alone the surf or garage rock realm. The band brings forth an exemplary array of artistry, which at times is all too buried in a seemingly monotonous genre. Bands can either bow out or standout, and it seems Khurangbin’s chosen the latter.

The act employs a uniquely-incorporated sound from Spain and the Middle East — particularly Iran — from the ’60’s, ’70’s, and beyond. Since the band dropped off their debut EP, A Calf Born In Winter,  in 2014, they’ve began to permeate the indie-rock dimension with their visceral singularity, landing on Bonobo‘s Late Night Tales compilation in 2013, and even went on to release a full-length album in 2015.

Ahead of the new record, Khurangbin’s dropped off a video for their new single, “Friday Morning,” which according to the trio is a song about “jumping into love.”

To little surprise, “Friday Morning” incorporates an imperturbable tempo. This type of groove has allowed numbers like “White Gloves” and “Mr. White” to see massive mainstream success, even earning the band a title-sequence feature in Netflix’s show Easy.

“‘Friday Morning’ is a love song, written and recorded at our remote farm in Burton, Texas where we got our start,” says the band.

“To commemorate the song, we asked our closest friends and family to record messages of love to each of us. The music video is a portrait of the band hearing these audio recordings for the first time, capturing on film the emotions one feels when they hear just how loved they are; a poignant and heartfelt expression in a time where, as a collective whole, we need to hear and express love more than ever.”

Khruangbin is set to embark on a massive tour of North America in support of Con Todo El Mundo this Spring.