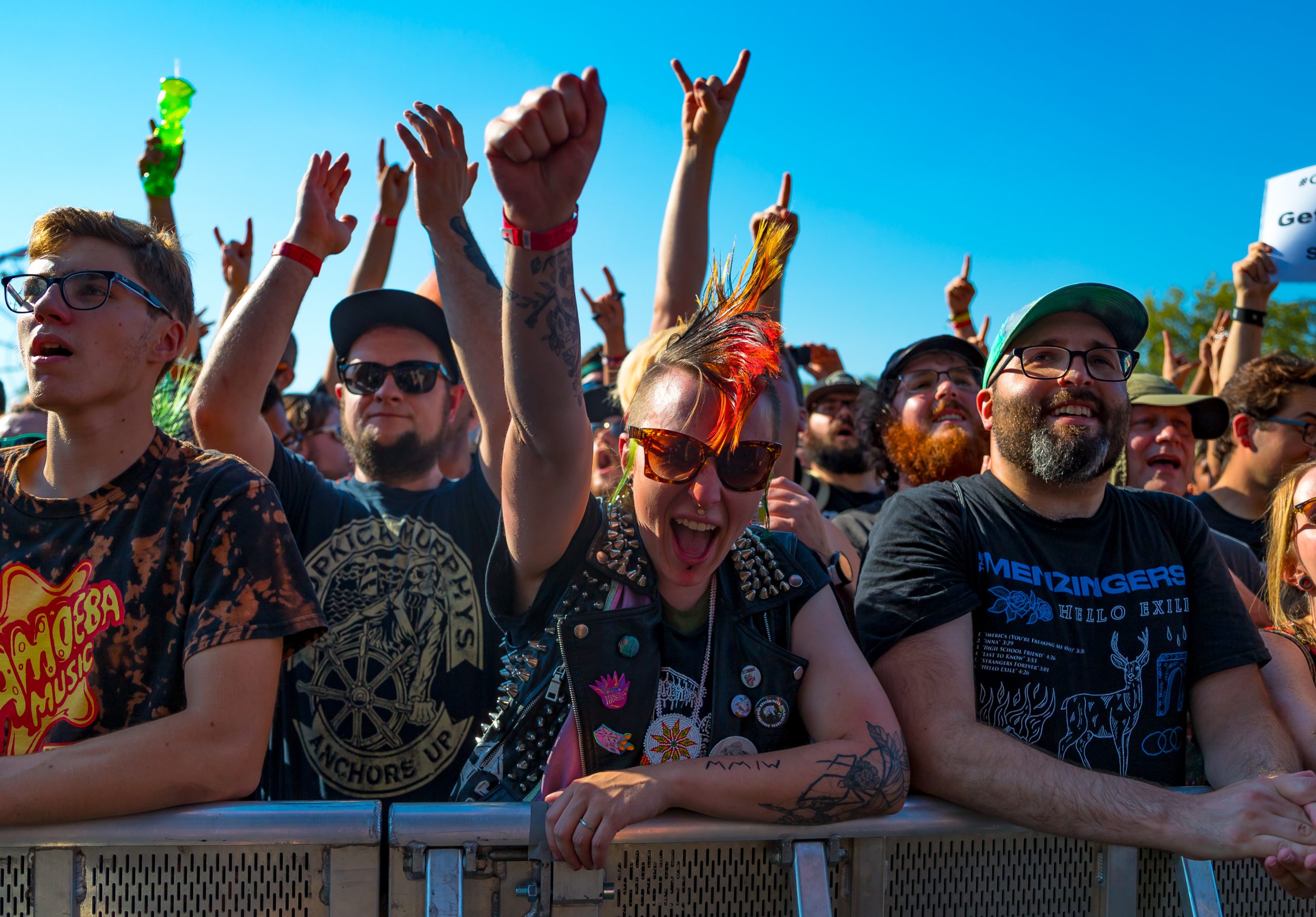 Thousands of worn-out, dehydrated, and sleep-deprived music lovers scraped together just enough energy to make it through one more day. Somehow, another successful year of Riot Fest had breezed by in the blink of an eye. The start of a new work week loomed heavily over the heads of festival goers, leaving them clinging onto the fest’s stage barriers until the final note. As the old saying goes, “all good things must come to an end.” While it’s never easy to say goodbye, goers left Douglass Park that night with an abundance of great memories and rampant enthusiasm for next year. But nobody could predict what stood on the horizon in just a few short months. Everything in the world went cold in 2020. At points, it truly felt as if all hope had been lost. While this hellish year raised several reasons to feel grateful, it didn’t leave much room for happiness. For most industries, (entertainment included), it turned out to be a downright nightmare. Stages across the world went dark, and nobody knew when (or even if) the lights would ever turn on again. Riot Fest, among most other mass gatherings, fell victim to a widespread list of cancellations throughout 2020.

The show didn’t go on; it simply couldn’t.

Most Riot fans had come to terms with the unlikeliness of the event carrying on through the height of the pandemic. With the fest slated to host recently reunited goth rockers, My Chemical Romance, the excitement was quickly countered by disappointment. Riot Fest organizers knew this, which motivated them to plan something equally as special for 2021. In return, select festival goers were treated to an extra day of music and fun, with the addition of a “Preview Party” on Thursday, September 16th, which featured free attraction rides and special performances from Patti Smith and Her Band, Alkaline Trio, and Morrissey. Thursday afternoon in Douglass Park marked the end of the festival’s 732 day hiatus, serving as a warm welcome back for goers, both new and old.

The turnaround was quick between Thursday night and Friday morning, as the fest’s first official day was jam-packed with stellar acts.

During their early afternoon sets, headliners such as Fishbone and Anti-Flag provided jolts of energy through powerful melodies and captivating stage presence. After experiencing so much time away, it truly felt as though each headliner was giving their fans 200% effort during each performance. Living Colour were no exception, as Corey Glover and company melted faces, and even brought out wrestling legend, CM Punk, on stage during their set. Following enjoyable performances from both Sublime With Rome and Motion City Soundtrack, inclement weather moved-in, leading to torrential downpours during Coheed and Cambria, The Circle Jerks, Dirty Heads, and Beach Bunny. Thankfully, the storm front showed mercy just in time for Chicago native Billy Corgan and The Smashing Pumpkins. The legendary 90’s group serenaded festival goers with countless classics from their catalog, including Disarm, 1979, Today, and Cherub Rock. The conclusion of Friday night was also met by another homecoming appearance from rapper Lupe Fiasco, who performed his album “The Cool” in its entirety.

With clearer conditions expected, music lovers flocked back to the festival grounds early on Saturday afternoon.

Headliners such as GWAR, Four Year Strong, and State Champs evoked some of the liveliest crowds of the entire weekend. The energy from each band led to collective singalongs, moshing, and an excessive amount of crowd-surfing. Shortly before sunset, hometown rapper Vic Mensa took his crowd down memory lane from the Riot Stage, performing his legendary mixtape “Innanetape” in its entirety. Hits such as “Orange Soda” and “Lovely Day” triggered nostalgia for many who first heard the project after its initial release in 2013. Riot Fest veterans, Run The Jewels, followed Vic’s performance, capping the night off with a memorable performance. The duo, which is made up of rappers Killer Mike and EL-P, attracted the largest and most vigorous crowd of the day.

Variety is never an issue at Riot Fest, and Sunday certainly did not disappoint.

Fever 333 was arguably the most intense and fun to watch band of the entire festival. The trio, who headlined the Radical Stage at 4:15 pm, delivered a rawness that could not be replicated. Frontman Jason Aaolon Butler was a maniac in the best possible way, spazzing out on stage and propelling to the top of one of the stage’s trusses, which stood multiple stories tall. Guitarist Stephen Harrison committed to high flying acrobatics before smashing his guitar to pieces. Drummer Aric Improta enticed the crowd by standing on top of his drum kit and hurling symbols and stands into the air. The photo pit was packed for a reason, and it certainly didn’t take long to find out why.

Legendary Canadian pop-punk band Simple Plan followed at the Radical Stage just 30 minutes later. The group, responsible for several 2000’s hits like “I’m Just A Kid” drew a substantial crowd and took their audience back to the good old days with selections from a solid catalog. Shortly after, legendary new-wave pioneers Devo took to the Riot Stage. The eccentric rockers, who are widely known for their hit single “Whip It” were greeted to a large and enthusiastic audience, with many fans wearing replicas of the band’s red cone hats. The Flaming Lips, who also headlined Riot Fest in 2019, returned to the Roots Stage soon after. Lead singer, Wayne Coyne, performed several hits from inside his iconic transparent bubble. Despite their performance being slightly-hindered due to COVID-19 protocols, the group fired on all cylinders and still put on a great show. Slipknot was given the honors of closing out Sunday’s installment from the Riot Stage, while rapper turned rocker Machine Gun Kelly helped cap off the year from Radical.

Chicago is incredibly fortunate to host Riot Fest every September.

Each year, I become more impressed by the effort that Riot Fest organizers put towards creating a welcoming environment for their goers. Although the current health situation has improved significantly since last year, there was still some lingering uncertainty as to whether or not Riot Fest 2021 would happen. The event had several headlining acts back out over the course of the past few months, and each time, replacement acts of the same caliber were announced. The dedication to making the event happen this year truly showed. The entire festival was well though out with health concerns still in mind. The layout and stage setup across Douglass Park was more spaced out than in years past, and COVID-19 vaccination checks and negative tests were strictly enforced prior to entry. Despite some initial skepticism, at no point did attending this festival feel dangerous. I am a firm believer in giving credit where and when it is due, and I applaud each and every person involved with this festival for making it safely and successfully happen again in 2021.

Additional photos from this year’s installment of Riot Fest can be viewed below.

Stay up to date with 2022 lineup announcements, updates, and other information over at Riot Fest’s official website.