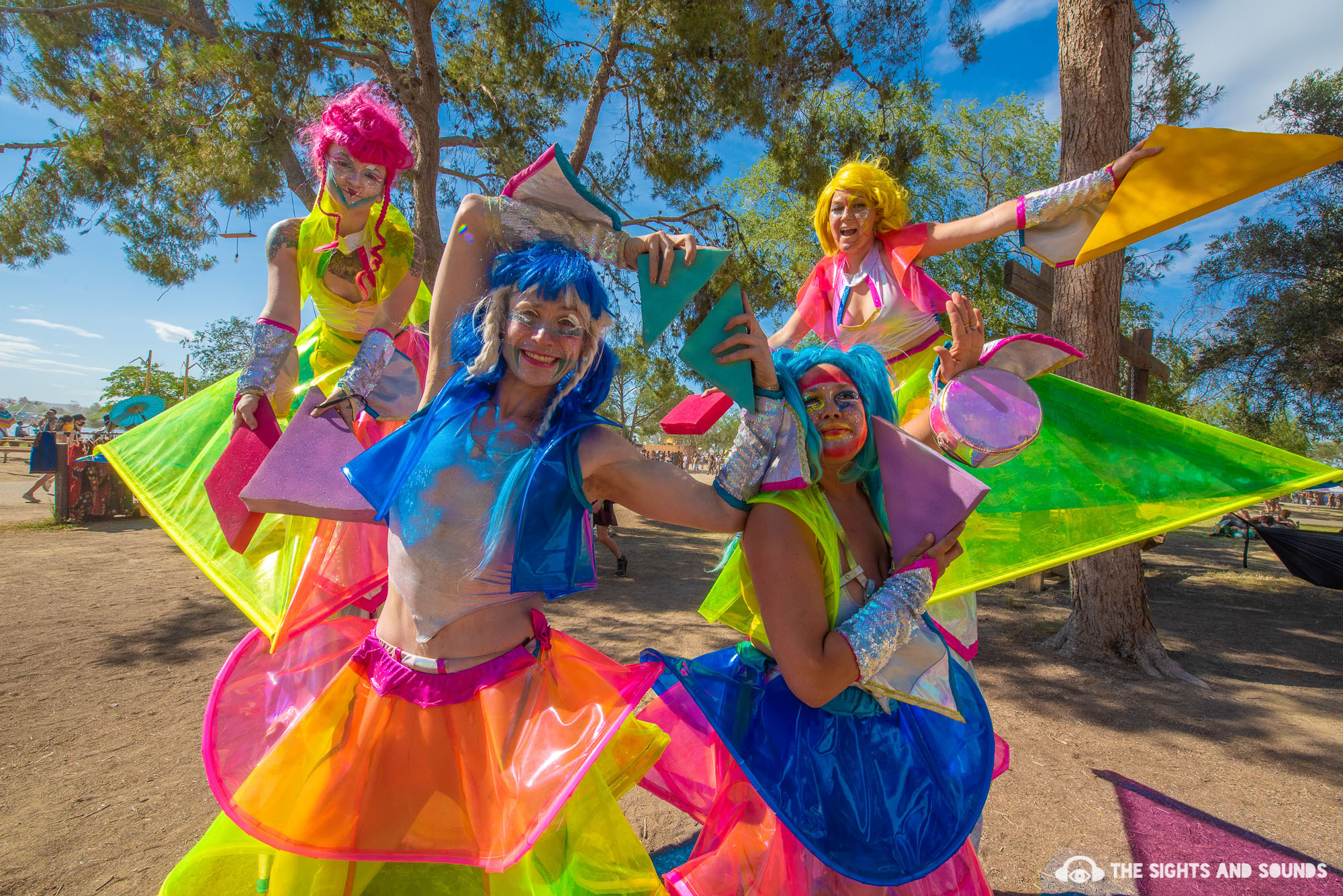 As I embarked upon my 7th consecutive Lightning in A Bottle, I took a moment to marvel at the fact that I had been to so many. There’s never been a question of whether or not I should be there- It has always felt like a natural part of my yearly rhythm. After going two years without it, I (like the rest of my community) was ready to greet the part of myself that Lightning in a Bottle embodies. The parts of myself that are reflected in Lightning in a Bottle are resilient- they are optimistic and resourceful- joyous and celebratory.

It sunk in as I drove towards Bakersfield how little overflowing uncontainable celebration I had been around over the past years. It had never occurred to me that Lightning’s bottle was quite like a champagne bottle, and the excitement and joy inside had been rattled and challenged, the pressure building until POP! We were free to release and be human and make a big giant mess.

Lightning in a Bottle hasn’t always been easy- It is my firm belief that festivals engage emotional muscles we don’t use often- flirting with the concepts of adapting to the wild and intense weather conditions, using our bodies to dance and walk indefinitely, and all of the emotions that come with being mixed with so much energy and humanity. To me, this is why festivals earn the label of “transformational” and Lightning In a Bottle is no exception, in fact it prepares its attendees for these experiences and equips them with resources like workshops and talks. If nothing else, the art and atmosphere alone has the power to be transformational for attendees not quite ready to seek their growth through scheduled mediums. In environments like this, the transformation is often seeking you, even when you aren’t focused on seeking it.

I celebrated the thought that Lightning in A Bottle is the space where I divinely met one of my soul mates in 2019. We were brought together by our late friend Lonna of Umba Love (may she rest in eternal loving peace) for a photoshoot and instantly connected. Years later and countless memories and growth later, we were returning to the space where we first connected. I was telling this to a very close friend, another soul mate, and she reminded me that we met at LIB in 2016.

Later that day, one of my models reminisced on our first photoshoot together when we met at LIB in 2017. Conversation after conversation revolved around how many people are in my life and part of who I am today because of this event. There is something so incredibly special about something like that- an incubator and container for authentic and deep connection. I owe this festival so much of my heart.

As I walked the grounds, I was impressed and enthralled by the production value of my surroundings. The Lightning and Thunder stages stood in their glory, crowds spilling out and filling as the hot days dwindled into cool and blissful nights.

The Woogie was its usual psychedelic color portal as lights danced up its rainbow columns. Live painters filled the spaces with pieces celebrating the light and the dark and everything in between. Multiple shaded areas spanned the grounds like The Beacon, The Crossroads, The Memory Palace, Yoga Luna and The Learning Kitchen- havens for soul enriching experiences such as sound healings, workshops, panels, and yoga classes.

A late night fire circle crackled as dancers filled it with a warm blaze. Wooden structures decorated the water line, as colorful clusters of floats filled its shores. The Grand Artique stood central- an immersive art piece of its own stage, bar, schoolhouse, jail, shops, and more.

Musically, Lightning In a Bottle deeply impressed me with the amount of Drum & Bass I heard throughout the weekend. As it gains a new wave of popularity in the United States, it was incredible to see crowds flock to The Stacks to experience it.

As a house head myself, my favorite musical experiences were the melodic sounds of Four Tet and the energetic yet deep set played by Kyle Watson. LIB attendees who were able to brave the heat on Thursday were blessed with a full day of Desert Hearts takeover on the beach. Multitalented and enthralling Monolink filled the Lightning Stage’s crowd as many sang along with his rhythmic vocals. Many lovers and fans flocked to Glass Animals to sing along with hits like “Heat Waves”, “Youth”, and “Gooey”. Lastly, highlights of the Thunder stage included Of The Trees, Ivy Lab, Clozee (featuring an epic fire show by The Firemingos), and GJones b2b Eprom.

There’s so much that can be said about a weekend at Lightning in a Bottle, but the word that encapsulates the experience is Expansive. As the event itself expands to include more contributors, art, and production- its attendees expand for having had the deep experience that is spending a weekend at a festival like LIB.

I felt so much emotion on Sunday as I thought about the people around me that met lovers, friends, business connections. Whether lifelong relationships or a lifetime within one conversation, we all move forth forever changed by one another. One thing I am sure of, Lightning in a Bottle truly is the festival community’s collective anniversary.

Make sure to get your tickets for next year! Sign up for early ticket access to lock in your

LIB adventure at the lowest price. Lightning Sale starts on June 15th, 2022 at 10AM PDT. Follow this link to sign up! https://www.libfestival.org/