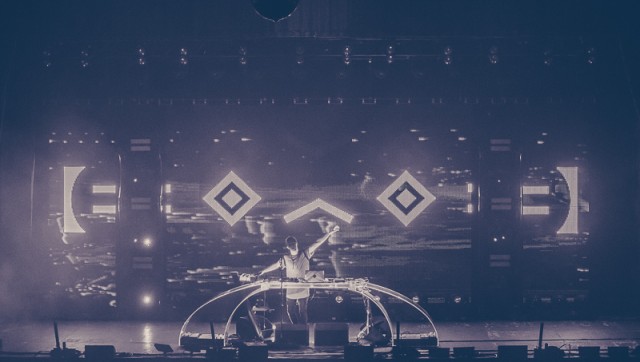 When Porter Robinson rolled through Chicago a couple weeks ago, my expectations were all over the place. For one, I had unanimously heard (from reliable sources) that his Worlds Tour was a one of a kind experience. On the other hand, I had serious reservations about how much I would actually enjoy a set from a producer that I hadn’t listened to since 2011. Nonetheless, I made sure to toss all of my preconceived notions directly out the window and went into this evening with my mind more open than ever before. And luckily for me, that decision paid off in spades.

After witnessing wonderful opening sets from both Lemaitre and Giraffage, Porter was next in line to take to The Aragon stage. As the setup for his extravagant production began, it became very apparent that this was not going to be your ordinary dance music gathering. I can vividly recall the exact moment when the lights finally came on and his music started playing. It was truly beautiful. And I don’t say that about EDM shows very often.

Instead of presenting the crowd with the electro house bangers that initially garnered him attention years ago Porter took a much more serene approach with this performance, embracing his newly honed direction. Taking the audience on a journey instead of to a house party, Porter weaved through textured singles such as “Sea Of Voices”, “Flicker”, and “Sad Machine”, that built and layered on each other as the energy in the theater waxed and waned with each drop. From the beginning till the end, the visuals were beyond remarkable and the audio was completely on point. Honestly, I can’t even remember the last time I saw that many smiling faces packed into one venue. Porter Robinson provided Chicago with a night of musical bliss that we won’t soon forget. Lets hope he doesn’t wait too long to return.

Check out our full photo recap of the night below: