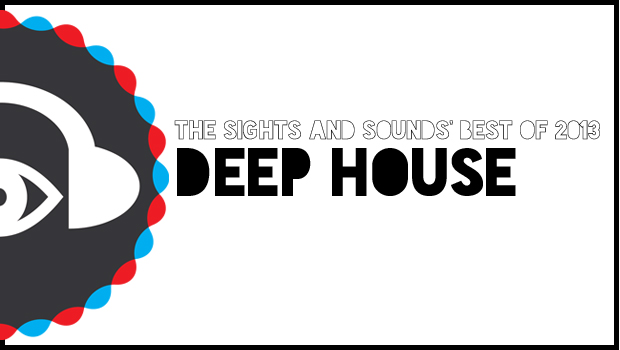 10. Storm Queen – “Look Right Through (MK Vocal Edit)”
Although originally released back in 2010 and rereleased in 2012, this underground gem didn’t become a noticeable hit until 2013 when it was remixed by hot-dj-of-the-moment Mark ‘MK’ Kinchen and dug up again by UK behemoth club/dance label Ministry of Sound. Highlighted by the smooth and carefree vocal of singer Damian C Scott, the track soared to the top of the UK chart becoming a huge crossover hit in Europe and garnering renewed attention in the US. Yet another example of the mass appeal and commercialization of deep house, the bouncy rework is proof that sometimes you really have to overcook an egg for it to come out just the right way.

9. Rudimental feat. Foxes – “Right Here (Hot Since 82 Remix)”
British drum & bass quartet Rudimental had a phenomenal year with the success of their debut album Home which included guest appearances by UK break out male vocalist John Newman, the uber-talented Emeli Sande, and Foxes (of ‘Clarity’ fame), to name a few. Although, the original is a pleasant surprise proving that there is plenty of life left in drum & bass, a genre long forgotten by radio and the mainstream in 2013, Hot Since 82’s haunting remix leaves most of the original on the cutting room floor and goes straight for the jugular with just a snippet of Foxes’ vocals integrated into an echoing drop so blissful you wonder where it has been all your life!

8. Klangkarussell – “Sonnetanz (Sun Don’t Shine)”
Similarly to Look Right Through, the debut single from Austrian duo Klangkarussell, Sonnetanz was originally released back in 2011, garnered plenty of attention in instrumental form in Ibiza in 2012, and was rereleased in 2013 with a fantastic vocal from newcomer Will Heard (which luckily adds more depth and vibrance as opposed to ruining the atmosphere of the original). Highlighted by saxophone riffs, a xylophone, a simple-yet-rich melody, and even a bass guitar, Klangkarussell have managed to perfectly capture the essence of a Balearic summer in just a little over three and a half minutes of pure sun-kissed bliss.

7. Joe T Vannelli – “The End”
If you thought that no record could ever duplicate the brilliance of Reflekt’s sampling of Ghosts, the theme music from the 2002 film The Road To Perdition, on their 2004 dance smash Need To Feel Loved, then I sure hope you kicked yourself when you heard this (or when you hear it now for the newbies). Another standout from Hot Since 82’s hit-filled Little Black Book album The End manages to effectively preserve the haunting perfection of Ghosts while creating something entirely new at the same time. A rare moment when recycled sampling is seen in an entirely new light, and although previously used, doesn’t feel at all redundant; not even for a moment.

6. Parra for Cuva feat. Anna Naklab – “Wicked Games”
The hugely successful Spinnin’ Records garnered plenty of attention in 2013 by releasing hugely successful commercial progressive house bangers such as Martin Garrix’s Animals and New World Sound and Thomas Newson’s Flute but showed a softer side as well, by releasing this beautiful cover of Chris Issak’s 1989 classic. Anna Naklab’s vocal preserves the vulnerability and emotion of the original over a softly pulsating beat good enough for the beach as well as late night clubbing.

5. Claude VonStroke – “Can’t Wait”
Barclay Crenshaw, more commonly recognized by his stage name, Claude VonStroke, is known for his dark techno and house sounds but on this standout taken from his critically acclaimed release Urban Animal he hits it out of the ballpark. The soft and subtle composition builds with anticipation so strong that you literally ‘can’t wait’ to hear the piano drop or simply listen to it over and over again…

4. Clarian & Guy Gerber – “Claire”
Not wanting to sound like a cop out here, but probably the less that can be said about this track the better. The lovechild of the pairing of two mood-setting geniuses, newcomer Clarian and Guy Gerber (introduction not needed) is a sublime exercise in melody, sophistication, and limitless sonic beauty. A perfect piece of soft-summery vibe with a piano-laced melody so timeless it could only be created in the most beautiful of dreams.

3. Duke Dumont feat. A*M*E* – “Need U (100%)”
Switch protege Duke Dumont kicked the 90’s house revival up a notch with a track as equally commercially appealing as it is current. A thumping, hand clap-filled, workout-ready, booty-shaking anthem with an estrogen-charged vocal from Aminata Kabba (aka A*M*E*) that took the world by storm in 2013; and who’s to argue?!

2. Chris Malinchak – “So Good To Me”
Brooklyn born Chris Malinchak’s debut is indeed ‘so good’ it’s no surprise that it has managed to make the year end lists of some of the world’s top music publications. What’s also not at all surprising is its crossover chart success (everywhere else but in the US, of course) and the enormous support it received from the likes of Pete Tong, Adele and Annie Mac, to name a few. Sampling Marvin Gaye and Tammi Terrell’s 1967 soul classic If This World Were Mine over an ecstatic soothing melody laced with a soft female coo in the background, deep house had no louder (or sonically more subtle) cheerleader in 2013 than this!

1. Green Velvet – “Bigger Than Prince (Hot Since 82 Remix)”
The original is undoubtedly one of the best singles of the year, but it’s the Hot Since 82 remix that really took this hedonistic, boastful, and simply brilliant monster to new heights. Chicago’s very own Curtis Jones’ (aka Green Velvet, aka Cajmere, aka Half Pint, etc., etc.) refusal to be defeated or go out of style is simply undeniable. Whether in Chicago or Ibiza, the spoken-word confident cool of the title punch line could be heard echoing like a thunderbolt on dancefloors everywhere. Long live fearlessness! Long live creativity! Long live house music!