Spring time is nearly upon, and it’s about damn time. There are two reasons I look forward to this time of the year: it warms the fuck up and all the festival lineups for the year are announced. It’s a time when the internet decides to collectively OMG!!! over a lineup or whine and piss about it, protest going, then end up going anyway, because shit, music festivals are amazing. And one festival that we will be looking forward to attending this year is California’s Lightning In A Bottle.

Held in a new location this year, Baker, CA will host the 2014 Lightning In A Bottle music festival, a fusion of electronic music and introspective qualities of installation art, live performance, spiritual workshops, and an overarching embodiment of cultural and environmental consciousness. Through this focus on unique creativity, Lightning in a Bottle is its own class of gathering. Featuring Moby, Little Dragon, Phantogram, Gramatik, Beats Antique, Amon Tobin, Baauer, Gold Panda, Simian Mobile Disco, Claude VonStroke, The Polish Ambassador, Damian Lazarus, Cashmere Cat, Chet Faker and Lee Burridge, the festival’s eclectic and diverse musical tastes should please fans of all backgrounds. In addition to the amazing lineup, much of Lightning in a Bottle’s intimate singularity is expressed through The Lucent Temple of Consciousness, an amazing sanctuary for all participants to enrich the soul and inspire the spirit. The 2014 schedule inside the Lucent Temple, built out of recycled and found objects, will include over 300 different experiences in yoga, workshops, speakers and exotic world music.

Check out the official 2014 video below and catch the this year’s full lineup after the jump. 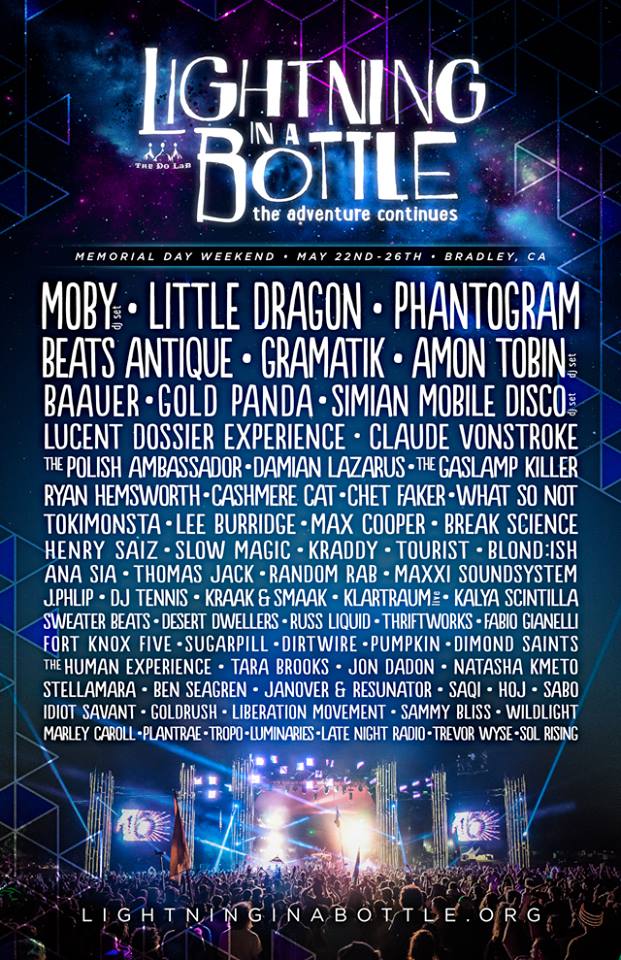