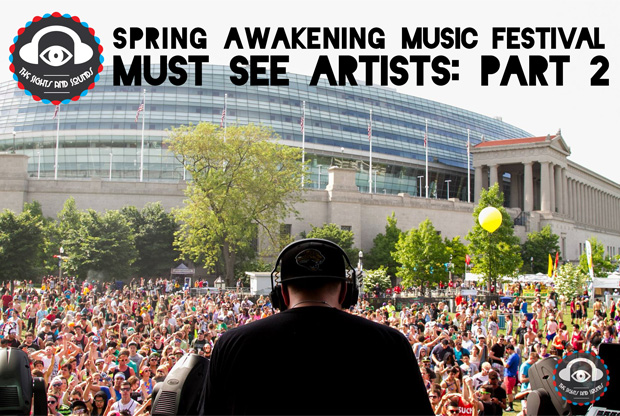 With less than one week left until festival season officially begins in Chicago, the city is abuzz with anticipation for Spring Awakening Music Festival. With such a star-studded lineup for 2014, you might be finding it difficult to know who to see. Luckily for you, we have broken down this year’s must see artists into a two part mini-series.

In part 1, we highlighted some of our top international performers who will be gracing the Spring Awakening decks. Now we shift our attention to the local scene, as we asked some of our favorite Chicago artists to give us the low down on what we could expect from their set, as well as what they were most looking forward to at Spring Awakening. Check out all the answers below and be sure to take note of the set times, as these are acts you will not want to miss.

With more than eight years of experience behind the decks, Jai Sephora, the alter ego of Animale, has proven that he knows how to put on a show for the masses. A winner of the Insomniac endorsed Discovery competition, he performed at last year’s EDC Las Vegas and was nominated for 2014 Producer of the Year for the Chicago Nightlife Awards with fellow Windy City artists Flosstradamus and Manic Focus.

“I’m super excited to be playing this year. You can expect a high energy set. Full of new music with some surprises along the way. Lots of personal edits I’ve been prepping and original stuff as well. If you’re looking to have an unforgettable time together, swing by stage 4 at 8pm on Friday and add me to your schedule.”

Representing the Pure Soul Entertainment family and nice guys everywhere, DangerWayne is no stranger to the festival circuit. Having performed at just about every Chicago festival and night club, he has crafted the perfect recipe for putting on one hell of a show. Look for DangerWayne to be sporting his trademark mohawk and stunner shades as he throws down for the main stage crowd.

“This year I’ve been given the unique opportunity to basically open up the entire festival. Playing the first set on the main stage Friday is an honor and I plan on setting the tone for the rest of the weekend. The early birds there for the show can expect the unexpected. I’m digging deep in the digital crates for this one, I have a lot of really cool high energy tracks that have slipped by unnoticed as well as my usual barrage of personal bootlegs, mashups, & edits.”

Producer, DJ, journalist, and blogger, Dani Deahl is out to prove a point in a big way. Rising against bullshit stereotypes and defining herself as a beacon for women DJs and producers, there is no doubt she will take advantage of the Spring Awakening crowd to throw down her best performance to date. Take our advice, Dani will be one set you won’t want to miss.

“It’s my first time playing SAMF so I’m honored to debut on the main stage. I’ve been working on a lot of new material in a genre people might not expect from me so I’ll be testing a lot of those songs out – I wish I could say more but I’ll probably announce during my set! Also, bacon.”

Another representative of the growing Pure Soul Entertainment group, GoodSex will make sure to lube the crowd up for a proper Spring Awakening insertion. With a career that is just beginning to blossom, this up and comer has made a name for himself by staying constantly on the grind, all in an effort to make sure you can stay on your grind on the dance floor. Expect lots of dirty dancing here, as this GoodSex is no two pump chump.

“You can expect a GoodSex set that will make you blush as you twerk, then later you will need to shower. I am most stoked to see Pretty Lights, honestly that’s what got me into electronic music in the first place.”

Since relocating to Chicago from abroad, Kalta has already generated major buzz as his bouncy, electro-infused bangers are primed from the dance floor. Keep an eye out for this name as he has recently picked up a partner to create the powerhouse disco duo Freak Island.

“Having just moved to the US from Italy, I am truly honored to be with playing such a massive festival. What makes it even better is that so many of my friends are also playing, and it feels like we’re one big family. As one half of Freak Island, I am gonna be testing out a bunch of new music from us and the rest of our Chi squad.”

Kings Of Class are “two of the craftiest cock-slanging cowboys to ever rise from the Windy City of Chicago” and have been working together on the Midwest dance scene under the individual aliases of Tsunami & Bobby De Maria. With that description, how could you not want to check out what these two have in store for their hometown fans? Together they have released original tracks and remixes on labels such as Hatrax Recordings, Movement Music, Murky Beatz & Sheeva Records.

“Spring Awakening to us is like a huge party to officially kick off the summer in Chicago…This year we look forward to playing on one of the bigger stages as well as launching some of our new merch. You can also expect to hear a few unreleased edits from us, and we may be testing out a new original, we’re working on if we get it sounding how we want within the next few days.”

Listening to Louis The Child without any pretext, one might think the Chicago duo would be comprised of late twenty-somethings with years of production experience. It may come as a surprise to you then, to find out that these talented musicians aren’t even old enough to drink at the venues they perform in. Hot off the release of their recent Nothing Is Real EP, there’s nothing but blue skies in the future for these two.

“Our 2pm – 2:30 pm set on the Buygore Records vs. Dirty Dutch stage will be the first time ever Louis The Child rolls out a “live set,” this set will be full of original tracks and original remixes and will incorporate drum pads and APCs which will bring a live performance aspect to our fans for the first time ever. Our Silent Disco 5pm -6pm will be a DJ set consisting of alot of unreleased music, and a first look into our new “Jersey Club” genre productions popularized by artists like Cashmere Cat and Trippy Turtle. Look out for our new Jersy Club remix of Childish Gambino’s 3005 record, coming to a blog near you!”

This Chicago bro-staple needs no introduction for anyone following the Windy City music scene. After a massive 2013 which included an internationally supported remix of Martin Garrix’s “Animals”, Milk N Cookies two have poised themselves for mainstream success. With a sound crafted for festival-sized crowds, this early afternoon set will set the tone for the rest of your weekend.

James: “Well Chicago summer is back, we forgot it existed. Spring awakening is gonna be a 72 hour bender full of music, babes, and fireball.”

With residencies at some of Chicago’s hottest spots, including The Underground, Sound Bar, and The Wit Hotel, PHNM is one of the Windy City’s biggest DJs you may never have heard of. But that’s not due in any part to his talent, as this Chicago beat maker is consistently touted as one of the best in the city by those who frequent the dance floors. If you’re looking for a hard-hitting, high energy set, then PHNM is a name you will absolutely want to remember.

“I’m looking forward to seeing acts like Kill The Noise and Flux Pavilion, I’m definitely a fiend for that harder grittier sound, I can’t get enough of it. Fans can expect new original material from me was well as some edits I’ve put together for Spring Awakening. Really excited to debut some of these new tracks at Soldier Field.”

The kids want techno, according to Steve Gerard, and that’s exactly what he’s going to give them. Catering to a deeper, more refined sound than that of the big room festival vibes, Gerard’s set promises to please house and techno fans alike. If you feel like getting down to some late night sounds in the middle of the day make sure to stop by The Hangar on Saturday afternoon.

“I’m looking forward to playing a bunch of wax in the Dirtybird Tent, then headed over to Sound Bar to open for CAJMERE. Quality music always finds it’s way. We’re just going to prove that this coming weekend.”

Formerly known as D1rty No1ze, these two up and coming Chicago producer/DJs have since re-branded and have created quite a buzz with their carefully selected remixes. From the sounds of it, Win & Woo will be incorporating some live instrumentation into their set, so make sure you carve out time for this unique performance. Also, make sure to check out their brand new remix of Red Hot Chili Peppers’ “Snow” below. You can bet you’ll be hearing this mix at Soldier Field this weekend.

“We are excited to incorporate 5/6 songs using live guitar, as well as music from our team that has been coming out the last month or so. This will be a set unlike any other we have performed and we can’t wait to show everyone what we got.”

Pronounced like Sega’s speedy blue hedgehog, Xonic will get you dancing faster than you can run around your house collecting gold rings to fight bad guys. But don’t let my analogy confuse you, as Xonic’s music is harmonically blended, creatively inspired and mixed for your maximum auditory pleasure. Having shared the stage with names such as Alesso, Afrojack, Krewella, Nervo, Hardwell, and Zedd, this Chicago staple is a no brainer for the closing evening of Spring Awakening.

“I’m most excited (and grateful!) for my evening set time. By that time everyone who is going to the fest will be there. It’s a blast selecting a wide range of songs and finding the threads that tie them together for maximum festival-goer experience.”