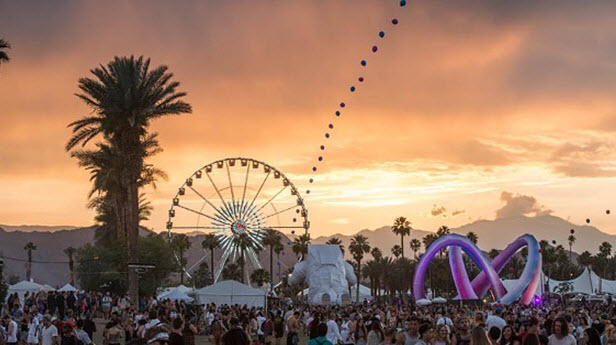 Oh, Coachella… You beautiful thing, you.  Maybe now that it’s been almost a year since we ended, I can finally stop pretending I don’t have to cope with real life and begin to reflect on the times we shared.

If this sounds like a sappy breakup letter, fear not– I have many more weekends at the Empire Polo Fields ahead of me.  However, I did have a severe case of post-festival blues after returning from my first Coachella experience last year.  If you don’t know what I’m talking about, you haven’t had enough fun in your life, so get off the computer and go play outside.

Festivals are my personal paradise for many reasons, but most simply because I get to do my favorite thing with my favorite people for three whole days;  they are liberating and  life-changing, and they leave their well-earned mark on you far after the music stops, the crowds disperse, and the grounds are cleared. I love the diversity, the good vibes, the anything-goes atmosphere, and the unity of the crowd during a cathartic set.  I love dancing with strangers; I love trading kandi; I love the absolute weird-ness of festivals.  I even love that “festival smell” (anyone else know what I’m talking about?).  I still hear certain songs, get goosebumps and tear up every. single. time, even if the memory calling them to surface is from years ago.  That, my friends, is what I call powerful.

I also love festivals because every single one is different.  “So what’s better: EDC or Ultra or Coachella or (insert festival name here)?” It’s a question I get frequently from people, having been to more than my share of them, but I can’t answer that in one word; it would be comparing apples to oranges.  Coachella was no exception to this rule of incomparability.  It was the first not-all-EDM, three day festival I have been to, so I wondered how it would measure up in comparison to the other behemoth dance events I normally frequent.  It ended up being one of the best festival experiences I have ever had for a multitude of reasons.  That experience had a lot to do with being surrounded by an amazing crew,  but since I assume you all have rad friends as well, here’s some of the qualities about ‘Chella that made me feel like I left the planet for 72 hours last April:

Low stress, more fun:  Coachella nailed it on a lot of topics that festival-goers frequently gripe about.  For non-campers, the shuttles were always waiting at the hotel to whisk guests away and standing by at night to take them safely home; better yet, they were always well-marked and lines were basically nonexistent.  Same deal with the bathroom lines, and they were usually stocked and cleaner than the cesspools of waste you find at other large events.  Cell service was the best of any festival I have been to–it was actually possible for friends to split up for different acts and find each other again later without embarking on some sort of heroic quest.  I’m sure you can relate to the anxiety of being the martyr who goes off in search of your long lost best friend at EDC knowing there’s a chance you will find yourself alone for the rest of the night as well (in which case… just embrace it, man), but not at Coachella.

Just the “right” amount and selection of EDM talent:  No, you will not see “KaskadePrydzArminAviciiTiesto backtobacktobacktobacktoback,” so don’t go to this festival because you want to see every single Blockbuster DJ who was just at Ultra in one weekend.  You will, however, see a great mixture of mainstream and underground acts; whether you just want to hear Calvin drop “Summer” at main stage or you feel more at home grooving in the dark to Duke Dumont, there is something for everyone here.  Alesso threw down one of the most pleasantly surprising and high-energy sets I’ve heard from him. “Tear the Roof Up” became one of this summer’s biggest bangers, and he’s continued to play similar sets at Ultra Europe and other festivals this season.  I can’t go without mentioning veteran Fatboy Slim‘s insane set–even though I didn’t recognize a single track except “Eat, Sleep, Rave, Repeat,” it was one of the most wild sets of the weekend.

I could have lived in the Yuma tent all weekend; time passed as if inside a black hole when I entered that dark, strobe light-spangled, gymnasium-turned-techno-club space, and personally enjoyed seeing a few of my personal bucket list DJs who have rarely played US festivals in the past.  I was especially highly anticipating Solomun‘s set, and when he opened with “Gamble On You,” which is arguably still one of the sexiest songs I have ever heard, I completely lost myself to dancing (accompanied by a random shirtless guy we instantly bonded with through mutual expressions of sheer elation) for that precious hour.  Luckily, there were many of those hours to come throughout the weekend with friends and strangers alike.

Beer gardens galore:  At first I was a bit skeptical about the “you-can-only-imbibe-in-certain-areas” idea of the beer gardens at Coachella.  After being used to having the freedom to carry open containers around pretty much any other festival, the restriction of staying inside the beer gardens while drinking was somewhat of a deterrent.  However minor a liberty it is, wandering around drink-in-hand is part of the worry-free festival environment with which I am so enamored.  Anyways, on to why the beer gardens are actually on the “good” list:  there’s a bunch of them conveniently located next to most stages, including the Sahara and Yuma tents, so they ended up being a great place to do basically everything that didn’t involve dancing your ass off while inhaling a bucketful of dust.  They are easy to meet up with friends, sit down (imagine that), have a cold beverage and get some food if you have a little downtime.  And yeah, a cocktail might run you $11, but you won’t need many–they make ’em strong. 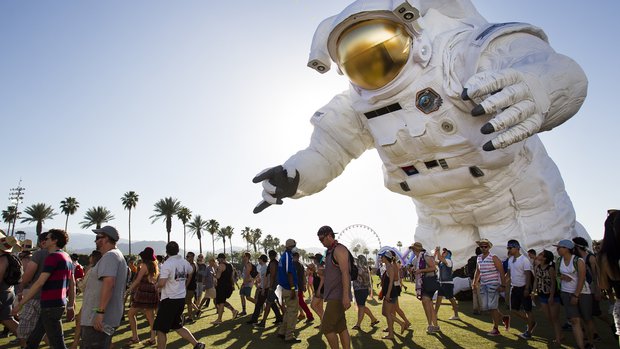 The vibe of Coachella was expectedly and refreshingly much different than that of most EDM festivals, which can be taken on both the positive and negative ends of the spectrum.  On the down side, there’s the inherent pretentiousness and hype of the festival, from the fashion to the celebrities to the subsequent hoards of press people.  On the upside, there are beautiful people wearing what’s going to be in the next fashion spread of Glamour.  On the down side, the crowd tends to be less polite and more edgy than dance music fans—as in, don’t accidentally cut someone off in line for the water refill station or come close to stepping on a sitting stranger while navigating a tight crowd, because you might not be forgiven as quickly as you’re used to. On the upside, there is a wonderfully diverse population of music lovers of all different genres, and the most impressive thing about it is that they all make the pilgrimage to the desert paradise that is Palm Springs and peacefully cohabitate for a long weekend of aural heaven.  Make of it what you will, but I prefer my rose colored glasses.

There are even more (less mainstream, more techno-yes!) rising stars on this year’s lineup, along with the returns of many favorites such as Kaskade and Axwell /\ Ingrosso. Needless to say, I bought my 2015 tickets on the early bird presale.