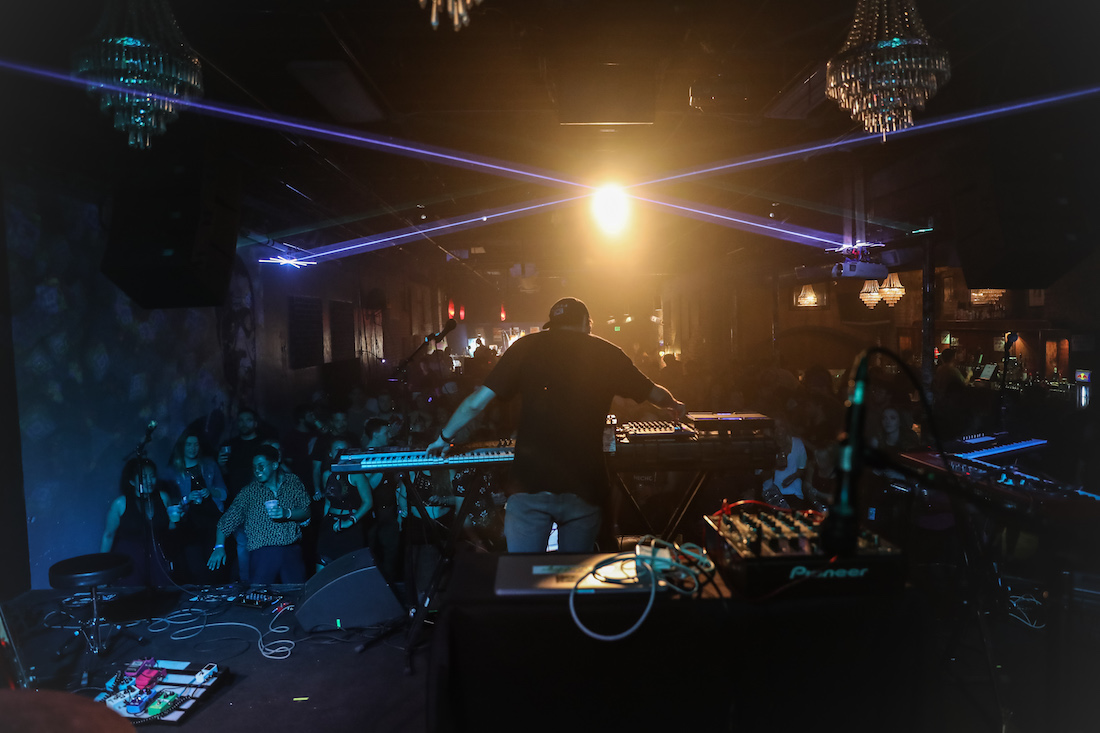 With a lineup this fire, it’s only right that each artist brought the heat.

Getting things started for the night, residents Mikey Thunder and Jordan Polovina kept it pretty mellow with for the first half of their set. Jordan’s debut of the new cello went solid and the two picked up their energy with some scratching and freestyles leading into JackLNDN’s set.

Next up, London native jackLNDN’s powerful singing and keyboard playing gave his twist on house music an interesting flair.

His rich musical history has allowed him to add flavor to his upbeat dance mixes; the feel-good style of his music was easily accessible for listeners. Performing for one the busier opening crowds I’ve seen at Cervantes, Jack fed off the energy on the dancefloor hitting notes and contorting his voice live to mix seamlessly with the instrumentals. The finished product of his production was as well-constructed as his composure on stage.

Headlining the night, Extraordinary Magnitude, known better as Exmag, came with a jammy synth party that packed out Cervantes’ Other Side.

The Exmag live band features core members Eric Mendelson, Tyler Dondero, and Dave Carls, as well as drummer Tyler “Koko” Fuller, and bassist Xander Moppin. Their levels of funk varied in intensity throughout the set; shifting from thick, fast pace dub to slowed down trancier jazz grooves. The group could hit marks all throughout the emotional spectrum.

Adam Deitch mentioned that guitar player Eric Mendelson interned with Lettuce for a little over a year and really impressed the band after picking up the guitar and actually showing them what he was capable of.

Deitch recalled asking him, “How come you never told me you were dope on guitar?” to which Mendelson replied, “I didn’t want to be that guy.”

Exmag definitely put on one of the best sets I’ve seen at a Re:Search Wednesday. Not only was the band totally dialed in, their flavorful jams combine the best of the jam and electronica worlds. The addition of the live band really helped their ability to stretch out their tracks and allowed them to get creative with the direction they wanted to take their songs. It truly was a special Exmag experience.

Closing out the night, The Shuj Roswell Experience gave Cervantes a taste of what Michal Menert’s Super Best Records has to offer.

Shuj Roswell, aka Mark Cooley, lead the pack with Eric Imbrosciano on the drums, J. Shook on the mic, Adam Revell using the Voyager, Prophet, Virus, and Juno, Sarah Mount on the saxophone, Matt Wilkolak on the trumpet, and Mark Wilkolak on the trombone.

The band started the set up with the slow, transient “Vibration of Life” but quickly turned up the heat with “Big Booty Bomb”, a funky hip-hop track with a phat horn section. Some highlights from the set were “Deep Space Disco” from Cooley’s debut album Flying High Above the World, and the band’s glitchy rendition of “So Wonderful” was an interesting one to hear live. Cooley’s ability to bring his songs to life by incorporating live instrumentation gave his set a truly organic, authentic feel.

All-in-all, it was a great night at Cervs. We’re looking forward to seeing everyone again next week for Prefuse 73, Teebs, and Big J Beats!!