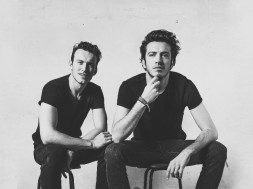 Good things come to those who bring good vibes

… or at least that’s what I’ve come to learn from Victorien Mulliez, the production half of upcoming deep house impresario duo FDVM.

We met Vic over New Years at Snow Globe, a festival held at a ski resort in California. While I was not a fan of freezing my fanny off in the winter temperatures (whoever thought an outdoor festival in December was a good idea is mental), Vic warmed up the crowd with a memorable, groovy deep house set that was impossible not to dance to – and for an hour we forgot it was minus zero.

Next month, Vic will be returning to California, but this time in search of hotter temperatures; today it was announced that FDVM will be playing at namesake festival Coachella, accompanied by the release of their latest track, “Shivers of Love.”

We met up last month at he and his wife’s farm house, a beautiful property on the Hudson River about an hour north of New York City. We chatted by the fire over wine, dinner and homemade flax crackers about how the makings of FDVM, Coachella, their newest project Supernatural, and where the duo is heading.

Here are 7 takeaways from our convo.

In an era where house music has become synonymous with repetitive and detached, it’s refreshing to meet house producers who are naturally positive and upbeat. That positivity comes through in their music in – quite literal – good vibrations. As Vic walked me through the evolution of FDVM’s music chronology in his in-house studio, I couldn’t help but think their music is what dancing barefoot on a beach with your best friends and a bottle of wine sounds like.

FDVM has found their place in blending deep house influences with accessible pop melodies, which garners the duo support from the likes of Robin Schulz, Klingande and Lost Frequencies. Their biggest hit to date is a remix of the popular track, “Pale Sun Rose” produced with their friend Teemid, another French producer.

To this day, Victorien and Florent find inspiration from artists such as Thomas Jack, Purple Disco Machine, Superlover, Claptone as well as Monkey Safari and ANDHIM, who are “known without being too commercial.”

“With FDVM we are in a special position between tech house and deep house music. If I had to describe our style in two words, it would be happy and groovy. Music for me is about love and happiness; my main goal is to bring lights into everyone’s life in a fun and funky way.”

Today FDVM is expanding their repertoire by drawing inspiration from cross-cultural and unlikely places – such as music from the historic region near the Niger River in Africa.

“Our newest release is a bootleg of an African track from Oumou Sangaré. We felt in love with the song and wanted to bring it to life [for the deep house listener.] It’s always a nice challenge to rework a beautiful track. The dazzling instrumental and captivating vocals are a very good basis for us. The idea was to bring it to clubs so we’ve designed a driving beat, percussive strings, sharp effects and heavy sub to make you feel the vibrations and give you shivers (of love.)  We played it live a few time and people are really enjoying it. For me, It’s the perfect example of an FDVM track, beautiful and powerful.”

“Florent and I met in our hometown of Lille, France and we decided to create FDVM (our name is derived from our initials – Florent Denecker and Victorien Mulliez.). At the time we weren’t producing music at all, just playing as DJs in the local clubs and throwing the biggest parties, almost like a cross between your stereotypical American college parties and Full Moon parties in Thailand. As our music tastes evolved, we started to produce music, and so FDVM also evolved from a side project to our main one.”

Glass half full – they are split across two continents, but see this an opportunity rather than an obstacle

Florent tells us, “Since Victorien lives in New York, [and I live in France]  we had to develop a new strategy and flow to make our project work. Working as a duo has its own challenges, but even more so when you’re not in the same country.

At the beginning we heard people say, “It’s a pity you guys have to split…” but then we realized that instead of making us weak, let’s make it a strength! For the last six months now we’ve been apart and we are growing at an incredible rate. Vic is playing a lot of events and festivals in the US and I’m performing all over Europe. It’s a great way to expand and share our music – like being in two places at once.

We are constantly on calls and share everything together. Victorien is mainly in charge of the music production and he sends me updates all the time while I provide him feedback. I am mostly in charge of curating the music, for our mixtapes and live sets. So in all of this we have found a great balance.”

After less than a year in the US, they’ve already been invited to play at Coachella.

Clearly their system is working. It was recently announced that they will be playing Weekend 1 at Coachella’s Do LaB – often heralded as Coachella’s best stage by progressive music aficionados. When asked about this, Vic can hardly contain his excitement.

“WHHHAAATTT Coachella!!!!… it’s a dream come true.  I never expected being able to perform there, or at least  not this soon. I went to Coachella two years ago and it felt like we were so far from making it there. We are so grateful for the DoLab to give us the opportunity to perform on their stage and can’t wait to share our music.” 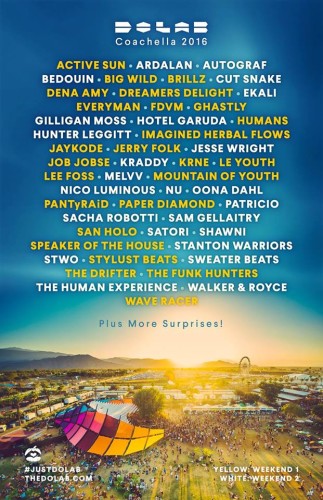 “We are producing a new series of mixtapes under the brand Supernatural, which is a blend between our mixtapes and guest DJs who we welcome to do mixtapes for us. There is a great enthusiasm around them so far, every mixtapes hit 100k in 20 days after being online.

“Organizing events is how it all started 6 years ago. Thus, it’s natural for us to launch our party series under the same name. We are going to curate a great line up with DJs that suit our vibe, involve as many artists as possible and create a heavenly atmosphere. The first event will be a day party in Venice Beach, California at Rose Room on April 23rd and the second event will be in Paris on June 10th at Faust. Our goal is to have another supernatural party in NYC soon, and then expand as much as possible.”

“It’s all about love”

“When you’re young you want to be a star. The industry so easily can shape you to become a ‘prostitute DJ.’ – to produce what will sell.

“I have no interest in becoming a superstar – there is no soul or purpose in that.”

“As you get older and really start to develop your sound, you realize what really matters is the connections you have with people. You go from wanting to be famous and make a lot of money to  just wanting to produce great music with your friends for your community. Today, my goal is to find a place that is at the intersection of many arts  – music, photography, poetry – from artists who are my friends from around the world. Because at the end of the day it’s all about connection and love”

"It's all about Love"Many thanks to The Sights and Sounds for these great footage during our show at SnowGlobe Festival.