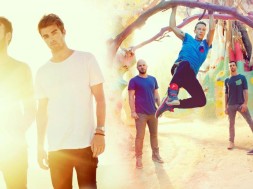 Just moments after debuting the track live at the 2017 Brit Awards, GRAMMY Award-winning duo The Chainsmokers released their highly anticipated collaboration with Coldplay, Something Just Like This. The surprising single is taken off the duo’s upcoming full length LP entitled Memories…Do Not Open, out on April 7th, and is the second offering from the album after Paris.

Sonically, it is exactly what one would expect from the New York natives and the world’s biggest band: a soft-EDM/trap production reminiscent of 2015 hit Roses, laced with piano during the verses and breakdowns and highlighted by a glorious drop at the end combined with Coldplay’s familiar guitar sound. With respect to the lyrics, Chris Martin’s writing shines through as he lists off superheroes one by one before telling us that he’s not one of them and all he really wants is love.

She said, where’d you wanna go?
How much you wanna risk?
I’m not looking for somebody
With some superhuman gifts
Some superhero
Some fairytale bliss
Just something I can turn to
Somebody I can kiss

Although, initially upon hearing clips of the collaboration back in September 2016 some fans feared that the song would be a disaster, it’s more than fair to say that it is anything but. There are no real surprises here, but the track combines the best of both worlds-Drew and Alex’s rising production talents with everything everyone loves about Coldplay. The decision to work with Coldplay is a smart move as it expands The Chainsmokers’ horizons both creatively and credibility-wise, while injecting some much needed depth and life that many of their tracks have been lacking. Judging from Something Just Like This, America’s favorite EDM duo is just getting started and will undoubtedly provide more exciting music leading up to the release of their debut album.