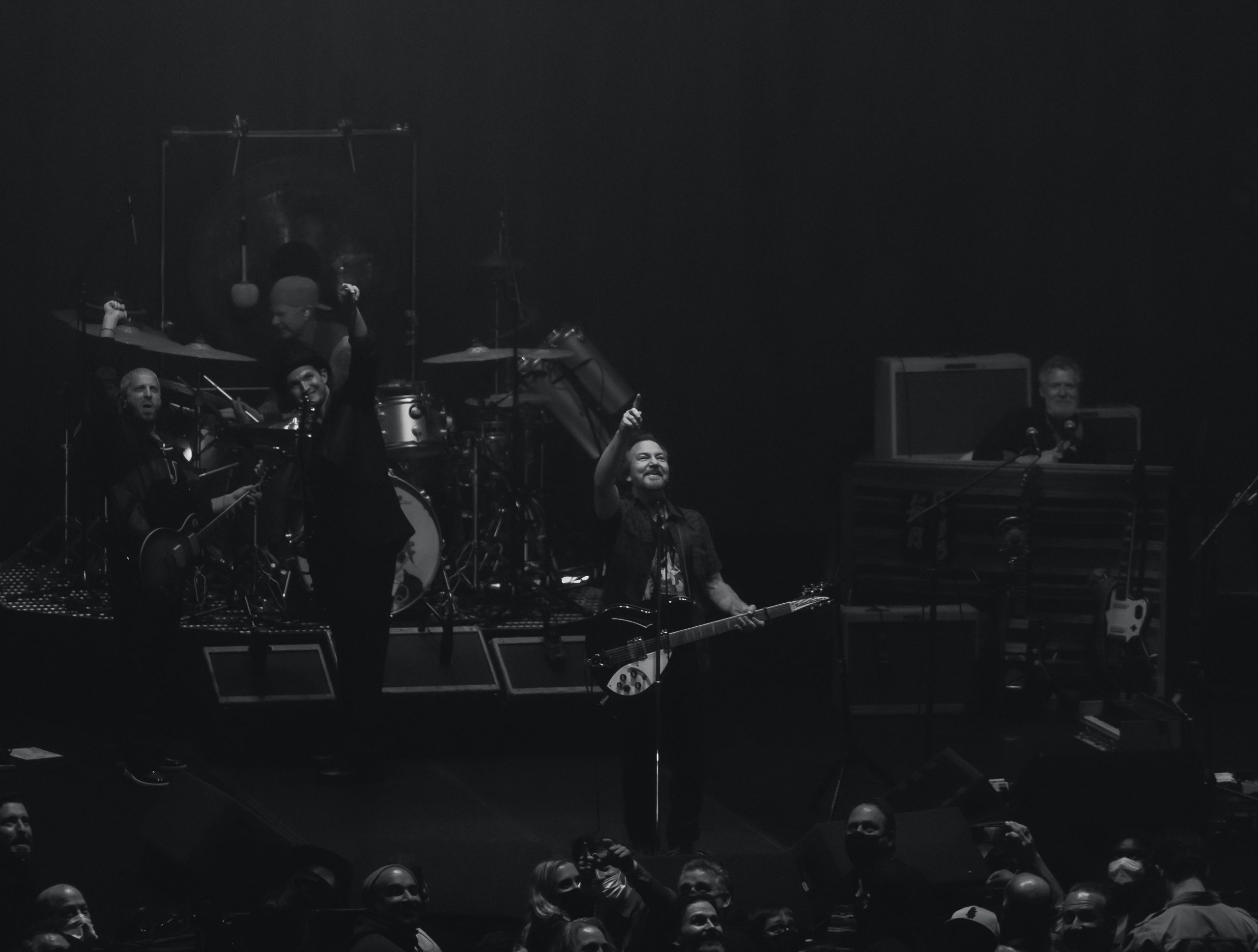 The Windy City isn’t just another stop on the road for Eddie Vedder.

For the Evanston native, it’s one giant reunion – at least that’s what felt apparent during the singer’s recent hometown performance on February 9th, 2022.

Flooded by nostalgia, Vedder took the stage at Chicago’s Auditorium Theatre last Wednesday, saying hello to old friends in the audience, and immediately reflecting on childhood memories of seeing his first concert at the same venue. “Many, many Chicago summers ago, I was twelve years old, and my Uncle Fred took me and said we were going to a concert”, Eddie shared with his audience. Looking far into the dark abyss of the venue’s upper level, Vedder then pointed out the exact location where he first watched Bruce Springsteen perform back in 1977. “I know the exact seat, because it’s right to the left of that pole, and it’s the last seat against the wall. So, tonight, I’d like to dedicate a song to the person in that seat.”

Vedder, who first rose to prominence in the early 1990’s as the frontman of the Seattle-based group, Pearl Jam, then proceeded to break out into a cover of Tom Petty’s song, “Room At The Top”.

Whether or not it was an intentional selection for the scenario, EV truly appeared to be “at the top of the world” in that moment. Even after winning multiple Grammy Awards and selling over 60 million albums with Pearl Jam, the singer-songwriter has never abandoned his humble Midwestern roots. In fact, he wears them proudly on his sleeve. While still active with PJ, the now 57-year old has taken on new ventures with his group known simply as The Earthlings. With a star-studded lineup consisting of Chad Smith (Red Hot Chili Peppers), Glen Hansard, Josh Klinghoffer (formerly of Red Hot Chili Peppers), and Andrew Watt, the group’s two night stop came just days before the release of their debut record, which fittingly goes by the title “Earthling.”

The band’s performance on Wednesday night heavily favored the new record, as nine of its thirteen songs appeared within their setlist.

Originals, such as “Long Way” felt fresh, well-composed, and reminiscent of The Traveling Wilburys. Given Vedder’s choice of covering both Tom Petty (Room At The Top) and George Harrison (Isn’t It a Pity) during the show, it wouldn’t be surprising if this tune was inspired by the group’s members. The McCartney-influenced “Mrs. Mills” was led by multi-instrumentalist Josh Klinghoffer’s graceful melodies on the piano, while Chad Smith (who Eddie deemed the leader of their group) provided explosive rhythm in various numbers, including a drum solo. Fans certainly did not seem to mind the fact that the performance was primarily revolved around non-Pearl Jam material, and they remained engaged during the entire 23-song performance. Despite this, a small handful of PJ tunes did make sporadic appearances, including “Porch” and the always well-received “Better Man”.

They say that home is where the heart is.

Between expressing his love for the Chicago Cubs and sharing memories of riding the Skokie Swift, Eddie Vedder made it very clear on Wednesday that no matter what, his heart will always be here in Chicago. And while its impossible to speak on behalf of an entire city, the response from his recent performances at the Auditorium Theatre would lead one to believe that the feelings are entirely mutual.