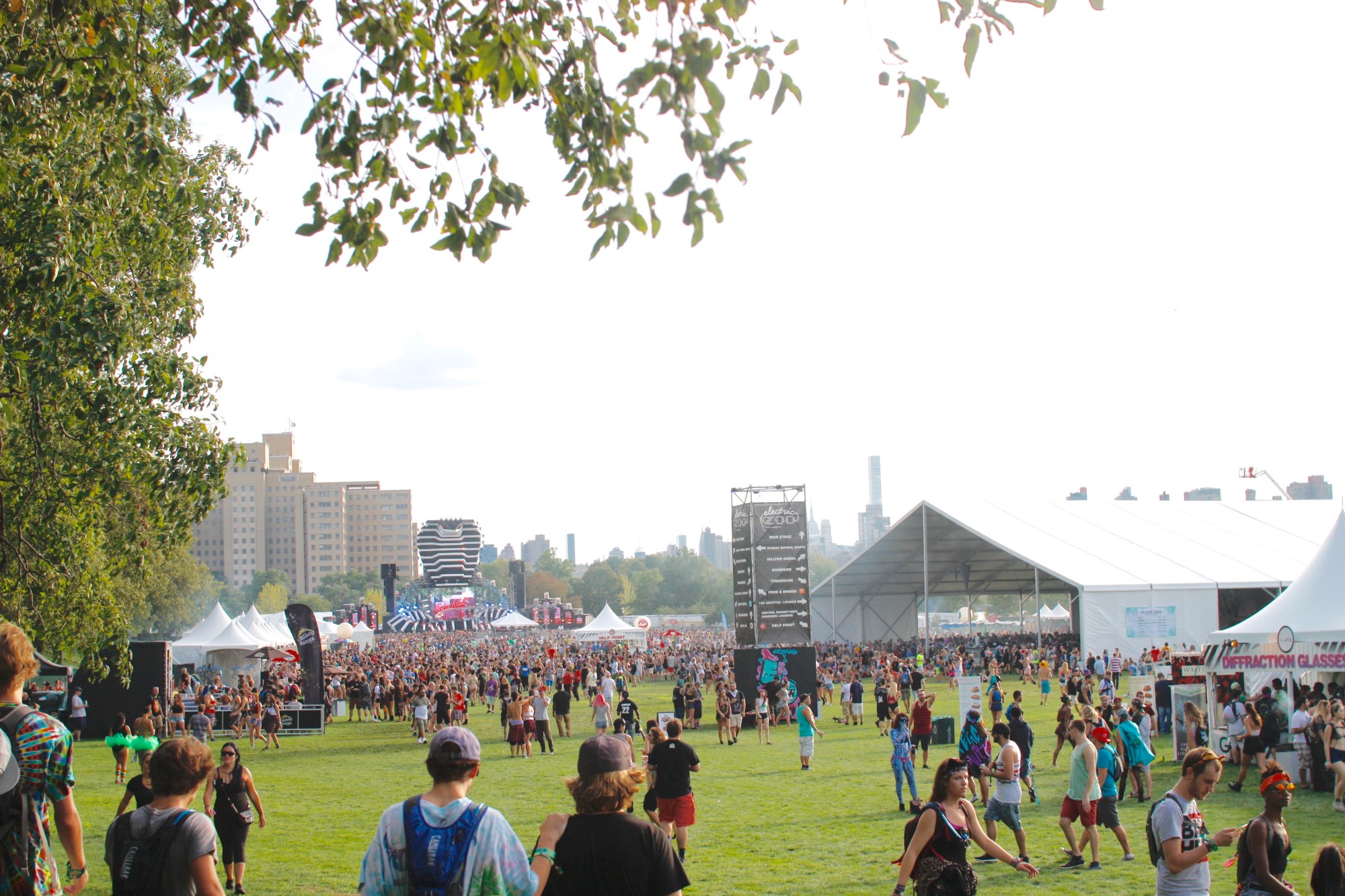 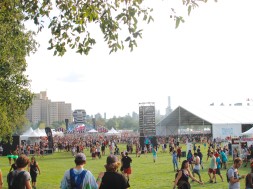 I’m standing at the middle of the mainstage crowd for Flux Pavillion on Friday, surrounded by a sea of bodies anxiously waiting for a beat drop. I look up next to me and there’s a girl in a bedazzled bra waving a flag that screamed “Electric Zoo Music Festival” in neon pink and for a moment I’m confused. Festival? That term didn’t seem to resonate with that moment as much as *~RAVE~* did.

These days the word “rave” elicits just as much discomfort as “moist.” It brings up an immature, all-flash-no-substance spin on electronic music that nobody really wants to be associated with anymore. Instead, the benign term “festival” has become the preferred label for these multi-day, multi-DJ events—so much so that events like CRSSD are beginning to use phrases like “it’s a festival, not a rave” to discourage any affiliation to EDM’s kitschy side.

But is there really a difference? Technically, no. The dismantling of the term “rave” to “festival” was just a rebranding effort by the industry during the early 2000s to distance electronic music from it’s shady, drugged out past. But seasoned attendees will know that not electronic music “festivals” are the same, even if size and lineup are controlled for. Events like Movement have completely different vibes from Electric Daisy Carnival—the fact that you already know which one is the “festival” and which one is the “rave” should tell you that there’s at least some truth to this.

The discrepancy between the two boils down to the underlying philosophies behind the events. In a festival, the music takes the forefront while the experience (i.e. production) is secondary. In a rave, the experience is valued just as much, if not more, than the music itself. 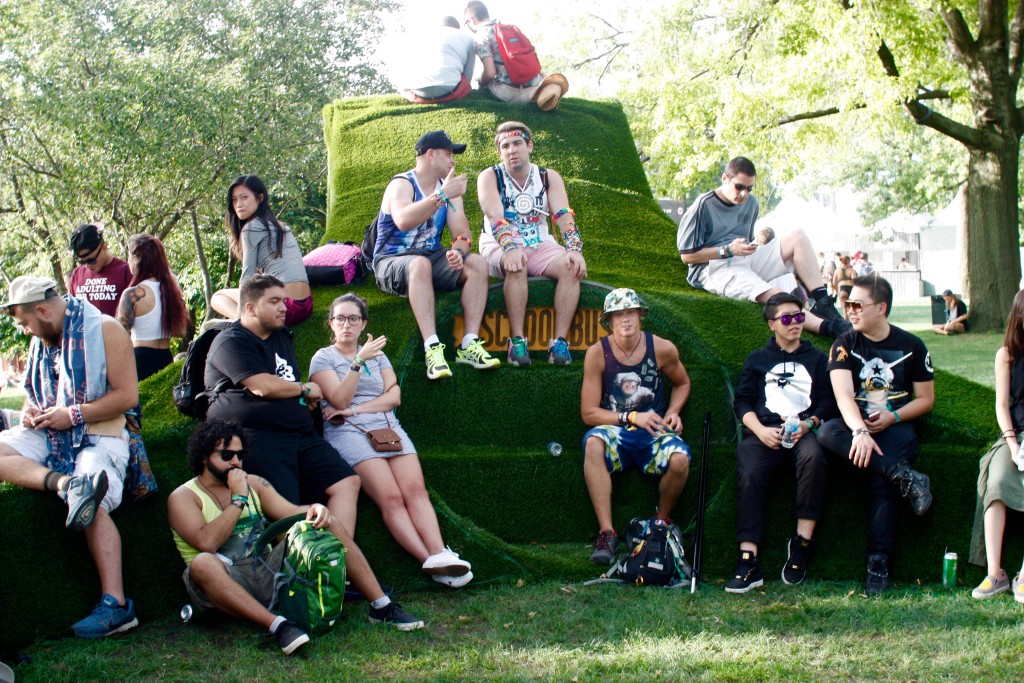 Electric zoo is a rave. When discussing their vision and efforts behind the event, the organizers—which include top industry organizations such as SFX Entertainment, ID &T, and Made Event—primarily focus on the atmosphere or the experience

The effect of these values was realized during Electric Zoo’s 8th year edition last weekend on Randall’s Island. This year’s event flew under the theme “Wild Island,” complimented by neon animal statues and themed stages including the octopus-encased Riverside stage, the jungle tundra themed Sunday School stage, and of course, the glittering cobra that towered in the center of the Main stage. 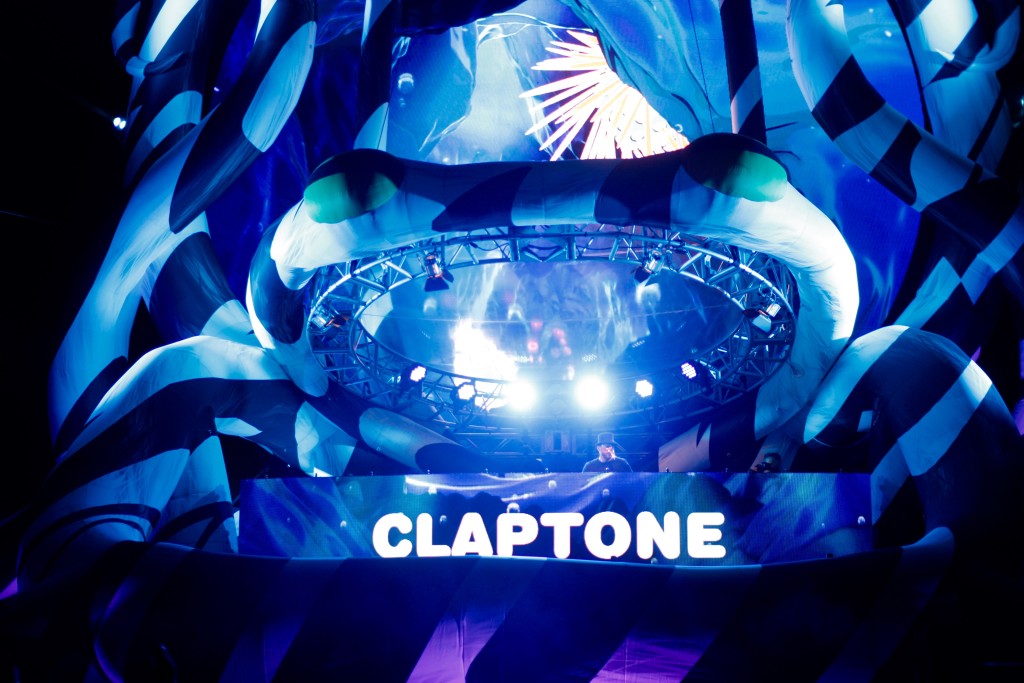 Over 83,000 attendees swarmed to the island throughout the course of 3 days, and the majority went all-out on the costumes that made the island even more extravagant than we thought was possible. Even more dazzling was the confidence and positivity of the fans that graced the island—though it crowded af, the crowd pushing and petty altercations were kept to a minimum.

Friday got off to a great start with Illenium on the Hilltop stage. Though Hilltop was unofficially crowed the “hardcore EDM” stage of the weekend, Illenium rolled out a fair amount emotionally tinged bass music including tracks from his debut album “Ashes” and his new remix of Flume’s Say It ft. Tov Lo. UK’s Spor, a side project of Feed Me, threw down almost an hour of heart-racing drum and bass—a genre that was surprisingly hard to come by over the weekend. Female producers were also a rarity on the lineup, which was a disappointment given the rise of excellent women in EDM over the past few years. Regardless, Anna Lunoe’s set, filled with deep house, trap, and just the right amount of dubstep, outshined many of her counterparts on Friday. Bassnectar’s closing performance was experimental just as much as it was kinetic. Launching with an unlikely (yet brilliant) mashup of Sound Remedy’s Chiaroscuro and Lorin’s own Freestyle, he blew away the mainstage with an staggering collection of sounds tied together with intricate transitions, well timed drops, and political messages. Our favorite moment? When Lorin transitioned from Generate to Rage Against the Machine’s Killing in the Name Of while flashing blood red images of despicable politicians and Fox news anchors. 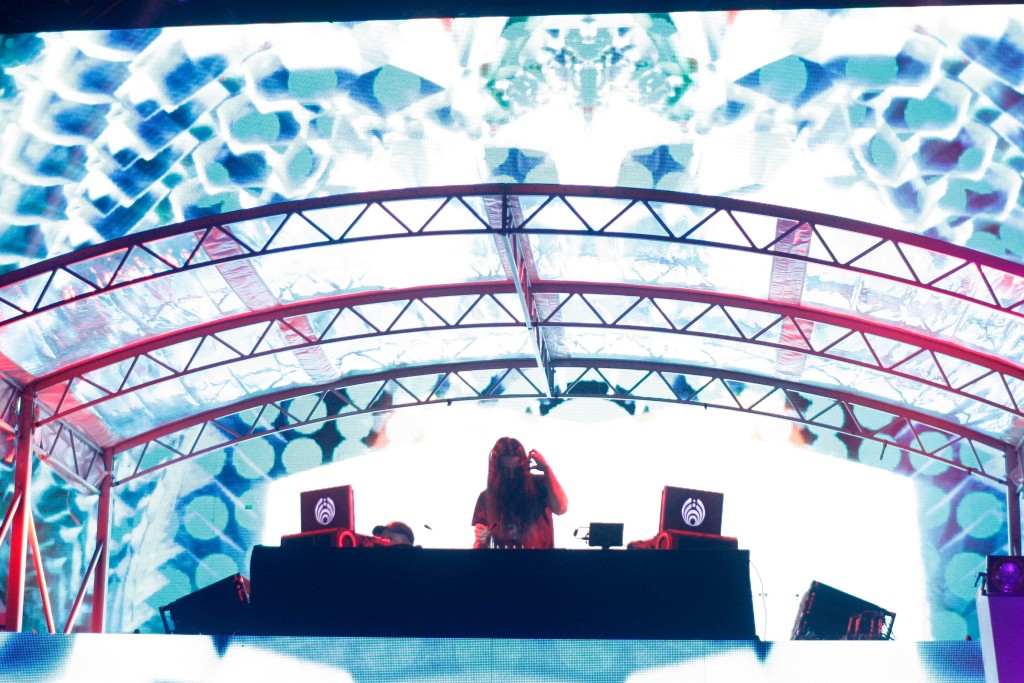 Saturday’s festivities began with a lighthearted performance at Hilltop by Chicago’s duo Louis the Child. Hermitude continued the future bass streak, concluding with one of their most popular tracks, The Buzz. The most anticipated set of the day was Porter Robinson, who has gathered an enormous following the release of “Worlds.” Though a large portion of the set was identical to every other set he’s done over the past 2 years, there were a handful of new elements worth noting—a new edit of The Thrill, the inclusion of Kanye’s Graduation, different Japanese phrases typed up on the screen. Sunday School Groove, our favorite stage of the weekend, was taken over by the global party brand elrow, who featured top acts like Bicep, Eats Everything, and Jackmaster. 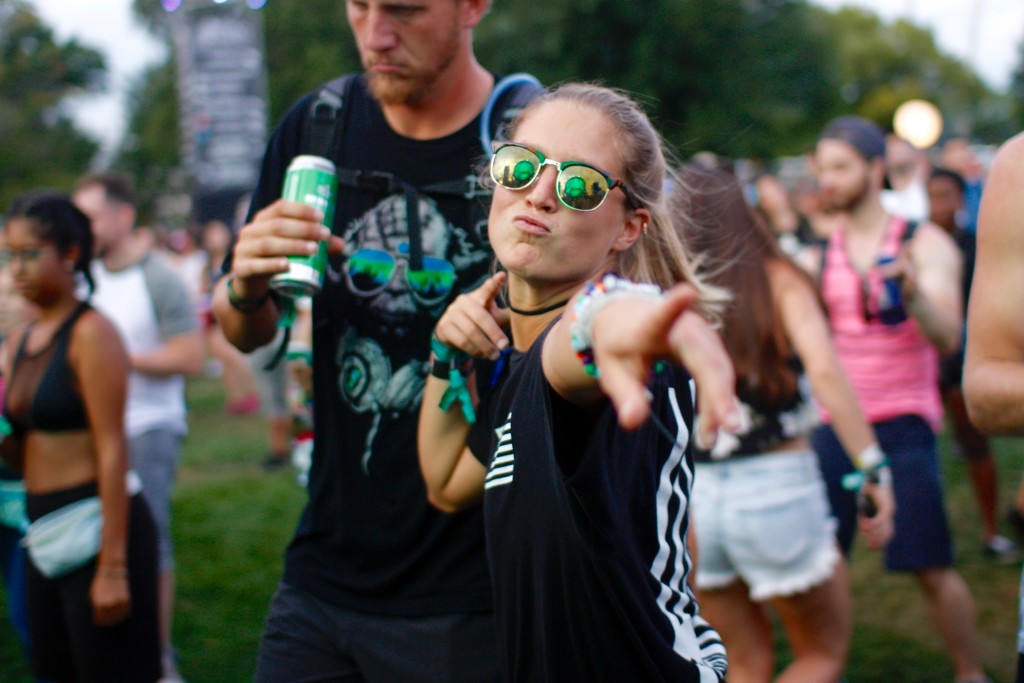 Sunday sold out with a whopping 33,000 people in attendance, which comes as no surprise since the lineup was stacked with some of the most popular acts in the EDM scene, including Cash Cash, Blasterjaxx, Chainsmokers, and Hardwell. But if hands-in-the-air pop and big room house music wasn’t for you (it wasn’t for us), day 3 had an amazing techno/trance/deep house lineup at Riverside and Sunday School Groove. Best performances included progressive house producer Gareth Emory and Dutch export Joris Voorn, who continued to play after the firework finale over at the main stage.

Last weekend proved that the production-centered raves like Electric Zoo aren’t always a bad thing. Because you know what? The past three days were incredibly fun for us. As with anything, if the values of the event reflect your own values on music, you’re bound to have a kick ass time. If you only care about the talent on the bill, the quality of the sound, and the ease of discovering great new artists, then maybe you should stick to festivals. But do you also like to dance, take part in a breathtaking experience, and meet like-minded people in the process, you’re one of the lucky ones who get the most out of these one-of-a-kind raves like Electric Zoo. 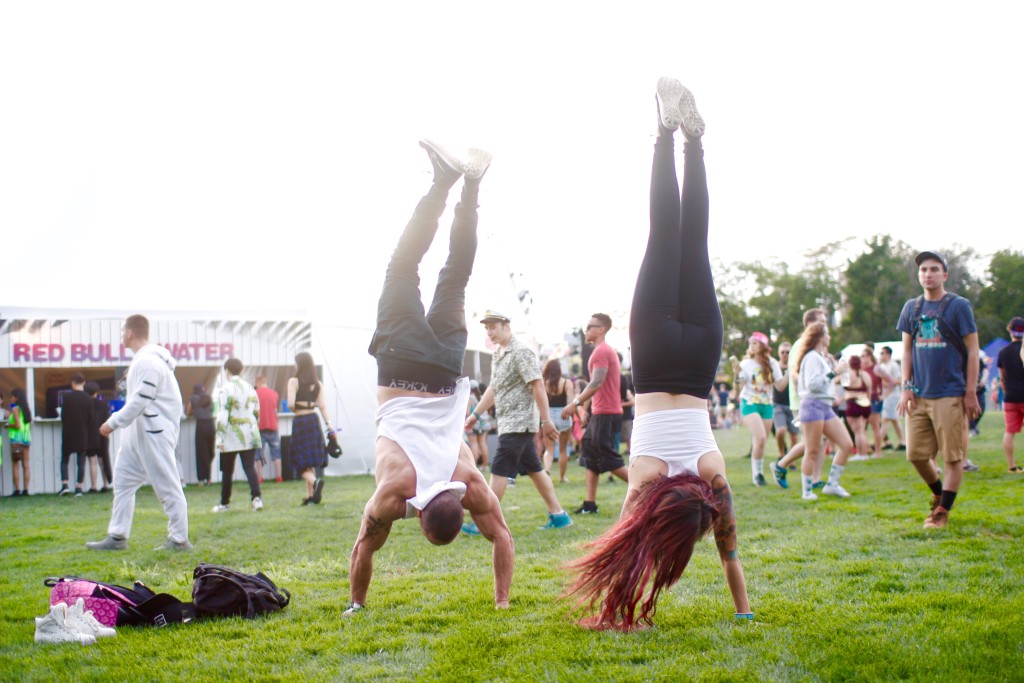 The Sights and Sounds Electric Zoo 2016 2

The Sights and Sounds Electric Zoo 2016 4

The Sights and Sounds Electric Zoo 2016 6

The Sights and Sounds Electric Zoo 2016 9

The Sights and Sounds Electric Zoo 2016 3

The Sights and Sounds Electric Zoo 2016 8

The Sights and Sounds Electric Zoo 2016 5