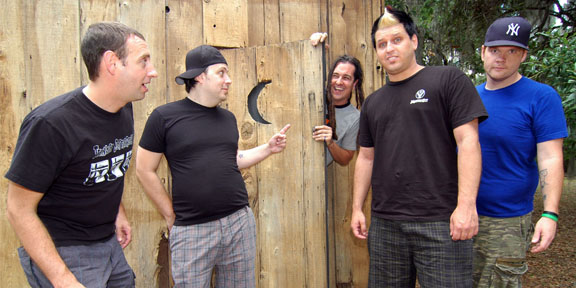 I just have to start off by saying that Less Than Jake has been my favorite band since the movie Good Burger. You remember the song “We’re All Dudes?” Yeah, that’s one of my favorites. It always makes me feel good. In fact, that is what almost every LTJ song does for me. Less Than Jake has been making music since their first LP in 1995, entitled Pezcore. Since then, LTJ has recorded seven albums and dozens of other projects, each one establishing Less Than Jake as a consistently great pun-ska band. A couple years ago I was attending a music festival in Australia called Soundwave and LTJ was set to be one of the early bands. Standing in line with close to 100,000 with only 20 people taking tickets, I had to settle to listen to them from inside a stampede of people. Not that it is any different from their actual shows, with LTJ getting the crowds up and skanking 10 seconds into their set. Still a bit disheartening. So I made sure that I went to their concert when I heard they would be playing at the Bottom Lounge in Chicago. The Bottom Lounge is a pretty cool bar/venue where you can drink and eat in a very large, decorated front room and then head to the back to see your favorite band perform while never moving out of sight of the bar. Less Than Jake played an amazing set, and despite the band not playing “We’re All Dudes,” they did perform all their big hits, including the new cartoon punk mashup featured on their homesite. LTJ is another one of those bands that sounds just as good, if not better, live compared to their recorded stuff. The crowd was on fire and skanking hard all night, thanks in no part to the encouragements shouted from the band. Crowd surfing was in full effect and at one point I saw one hefty man break his fall with his face. Props as well to The Supervillains who opened. I hadn’t really payed much attention to these guys, but had the chance to talk to a couple of them after the show, and I will definitely be listening to more. You can check out a video of them performing “20 Excuses” from the concert at our YouTube Channel. I also got to meet the bassist and lead vocalist, Roger Manganelli, from Less Than Jake. What a cool guy taking his time to talk with me right after the show. Props. Here is a little mashup of videos from the concert I put together to give you a little taste of what it was like up front and in the mix. It’s not the best camera work, but that’s not what I was focused on anyway. I hope you enjoy.

If you want to hear some more of Less Than Jake, check out some of their songs below. You can see more concert footage at our YouTube Channel and if you hear anything you like, check out Less Than Jake’s website where you can purchase their stuff.