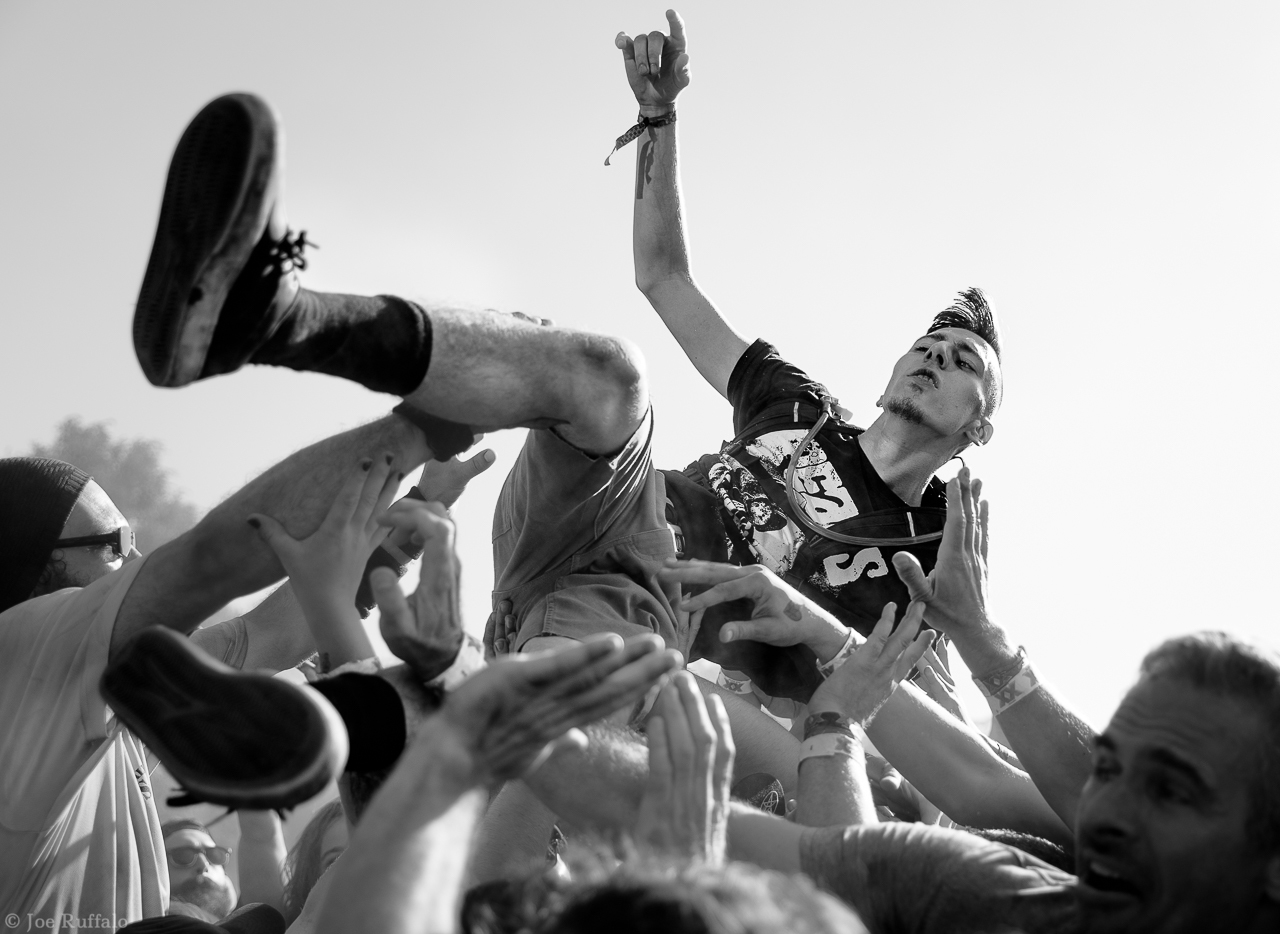 For the first time in many years, I was feeling like a kid again.

Following a string of failed attempts, I felt obligated to accept defeat. The eve of Riot Fest had shown no mercy, as it found a way to trigger my unbearable insomnia. Despite inducing an additional stir of frustration, I really didn’t mind.

As I approached the entrance gates to Chicago’s Douglas Park, I could barely contain my excitement.

My pilgrimage to Riot Fest had been a long time coming, and reality finally started to settle in. As I peered down at the weekend schedule, however, I realized that I was on the brink of facing a festival goer’s worst nightmare: multiple overlapping sets.

A lineup overflowing with bucket-list names soon made me realize that the weekend would pose challenges of its own. Being able to provide in-depth, full set reviews would have been preferred, but covering the fest with no help, it just didn’t seem viable. Given my situation, I made an executive decision early on to cover as much ground as humanly possible.

Walking amongst the crowd on the way to my first set, I quickly realized that this gathering was far different from anything I had previously experienced at a music festival.

While I don’t typically believe in first impressions, it became difficult for me to not feel right at home. This sense of familiarity led me down memory lane all throughout Friday, watching artists like Sum 41, Young the Giant, Cypress Hill, Taking Back Sunday, and Digable Planets rip through timeless classics. Before the day reached its conclusion, surprise headliners Weezer capped off what was an already incredible first night with hits like “Island In The Sun”, “Beverly Hills“, and “Say It Ain’t So.”

The band surprised fans with covers of “Africa” by Toto, as well as “All The Small Things“, paying homage to Blink-182 after being forced to cancel their appearance at Riot Fest 2018. Friday night managed to set an exceptionally high bar, with fans leaving Douglas Park fully knowing that the best was yet to come.

All expectations were met, as Saturday proved to be the heaviest hitter of the weekend.

From a musical standpoint, it was the most fun I’ve ever had in a single day at a festival. Before having an opportunity to settle in, I was surprisingly greeted by two veterans of Riot Fest. Members of the heavy metal band, GWAR, as well as notorious party king, Andrew W.K. arrived to the grounds well before their headlining performances. Both were very personable and down to earth, and it was quite special being able to talk and take portraits.

At that point, my day was already made, even though it had just begun.

Being worn down from the previous day and not having my coffee, Gary Numan’s set was exactly what I needed. At 60 years old, the singer made it known that age was just a number. With jet black hair, tattered clothing, and white face paint, Numan appeared looking like the product of a futuristic dystopian wasteland. Widely recognized for his 1979 mega-hit “Cars“, the new wave legend emphasized that he was far from a nostalgia act – delivering plenty of innovative material along with the hits. Being the first set on my Saturday itinerary, I considered this the best performance at Riot Fest 2018.

I decided to make my way to the Radicals Stage, where I set up camp for the next 3 hours. Another group from my childhood, Wolfmother, delivered a blistering performance which included “Woman“, “Joker And The Thief“, and plenty of other authentic sounding rock ballads. Following their set, The Voidz made their much anticipated return to the Windy City. After being plagued with technical difficulties at The Empty Bottle earlier in the year, the band achieved full redemption, flawlessly displaying their dynamic chemistry.

As the sun crept its way beneath the tree line, I watched Elvis Costello & The Imposters perform “(What’s So Funny ‘Bout) Peace, Love, And Understanding” from a faint distance. Not being able to photograph and watch more of this set was one of the bigger tragedies of my weekend.

Given Elvis’s recent health scares, I really didn’t want to take his performance for granted, but I had to lock down my position for another opportunity of a lifetime.

With the time approaching 7:30 pm, fans of all ages congregated in masses to witness a piece of living history.

Elvis Presley, Carl Perkins, and Buddy Holly have all come and gone, but The Killer continues to play on. Most widely recognized for his 1957 hit “Great Balls of Fire“, Jerry Lee Lewis is one of the last remaining founding fathers of rock and roll. Well into the later stages of his storied career, the 82-year old pianist still managed to attract one of the wildest crowds I came across all weekend. American classics such as “Roll Over Beethoven” and “Whole Lotta Shakin’ Goin On” provoked fans into dancing, singing, and crowd surfing.

Known for being a wild man himself in his younger days, Jerry Lee even managed to trigger a mosh circle in the middle of the audience. Being able to watch the last surviving member of The Million Dollar Quartet would serve as a defining moment for many music lovers and photographers, such as myself. In fact, it was the most influential reason behind my desire to cover Riot Fest 2018.

As if the day couldn’t get any better, I was able to catch the second half of another one of my all-time favorite groups.

I walked back to the Roots Stage just in time, as Interpol was approaching the meat of their mind-blowing set. Currently on tour supporting their newest release “Marauder“, Paul Banks and company didn’t stray away from fan favorites.

Hearing classics such as “Obstacle 1“, “NYC“, and “Leif Erikson” ended up being more evocative in person than one could imagine. Short of a few shots from the crowd, I unfortunately missed my opportunity to photograph the band – but it was well worth the sacrifice.

To no surprise, Beck served as the perfect candidate to close out Saturday night. With phenomenal colors and visuals, the 48-year old delivered hits like “Loser” and “E-Pro” before bringing out Gary Numan for an encore rendition of “Cars.”

And in the blink of an eye, it was already Sunday.

With still plenty of great music to go, Riot Fest 2018 had reached the final day – one that most wished would never come. Regardless, it was off to a great start as I had the opportunity to photograph former guitarist of The Smiths, Johnny Marr. While he had plenty of competition, Johnny’s set was another one of my favorites of the weekend, as he covered many Smiths songs, including a killer rendition of How Soon Is Now?.

Following the performance, Suicidal Tendencies took the stage, evoking the wildest crowd I saw all weekend. As those in attendance could attest, there was no question that Mike Muir did his part in reminding us what Riot Fest is all about. After catching the tail end of Debbie Harry’s performance with Blondie, I  made my way over to photograph and watch Incubus.

Much like Friday, I was brought back to childhood, hearing tracks like “Anna Molly“, “Love Hurts“, “Wish You Were Here“, and “Drive.” Witnessing the band power through so many great songs, I was totally content with leaving the grounds for the day, when I completely forgot about Run The Jewels.

Waiting in line for the duo to go on, I was able to catch a glimpse of Father John Misty taking his audience to church with songs like “Real Love Baby” and “Pure Comedy.”

Soon after FJM exited, fans migrated to see RTJ at the Riot Stage.

Killer Mike and El-P emerged to a crowd that had totally lost their mind. Looking into the distance, all that could be seen were fans throwing up the iconic RTJ symbols with their hands, having the time of their lives. Run The Jewels shut Riot Fest 2018 down the only way they knew: with a bang. And just like that, the weekend had reached its inevitable conclusion.

To the outsider, Riot Fest may appear rough around the edges.

Yes, it may lack some of the bells and whistles, contrary to other competing festivals. The truth about Riot Fest, though, is the fact that it’s part of a dying breed – it’s a fest for die-hard music lovers.

It seems that, in today’s society, many goers attend festivals because they’re perceived as a social gathering, and the musical aspect has become nothing more than background noise. There’s evidence that Riot Fest organizers hold motives other than just making money; they care about creating a unique and memorable experience revolved primarily around the music. The amount of time, effort, and dedication that goes into putting this festival together each and every year truly shows.

For three days, I was engulfed in a world of fantasy where all perception of time had been lost.

Upon walking through the gates off West Ogden Avenue, everything became transparent. I spent my entire weekend with strangers: parents, grandparents, children, punks, and outcasts. I conversed with people of every color, background, religion, and orientation.

Despite a plethora of differing perspectives, the one common trait that brought all these individuals together was the sole love and genuine passion for music. In a city (and world) that suffers deeply from severe segregation, violence, and indifference, Riot Fest is doing its part in what seems to be our only hope for unity.

Check out the rest of our gallery from Riot Fest 2018 below.

0
17   0
previous Over The River And Through The Woods: To Dirtybird Campout We Go
next Anderson .Paak and Kendrick Keep Summer Going with New Single ‘Tints’