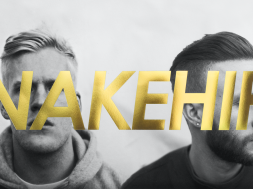 I’m not new to this, but I certainly don’t feel like I’ve got a grasp on the categories these days. From “shoegaze” to “acid jazz” to “chillwave” to “trap,” my confusion regarding genres and worry about hitting the wrong target in front of pretty girls with crazy haircuts prompts me to simply make shit up.

I was talking with my good pal GOODSEX about this issue with defining a genre that a song should be in and how frustrating it has become. He turned away from his CDJ (he’s 24/7 with it, these days. Check out his new song Side Ponies & Sweat Pants if you’re not already in on it) and told me to not sweat it. He said that coming up with something on my own would resonate better than any preconceived definition would, I have no qualms with conjuring up a better moniker than “synthpop” that makes for a more visceral description, so here goes…

Their familiar “warble-echo” intro is the impetus for that definition and although it’s something that is in every Snakehips-related track, they could never be defined as button-pushers or anything “cookie-cutter.” There’s a through-line with their tunes, where, if you like what that particular sound is, you love them. They’ve hit this sweetspot where they’re doin’ their own thing and have their own sound but aren’t formulaic.

They employ snaps and snares but keep things at a low hum. Their drops are ones you see coming but make you pay attention rather than wig out because it’s not just noise coming at you, it’s composed and gorgeous and you want to know what’s coming with them.

And lately, what’s been coming from them have been hits. Smash jams. I haven’t slid their songs to anyone that hasn’t liked them. The Snakehips duo, James Carter and Oliver Lee, have snapped to a point where they’re not gonna be able to go and get a burger without getting harassed and in addition to the duo’s pristine sound, James and Oliver roll with the winners. Lemme take y’all to school for a second…

They’ve been bubbling for more than a few years where the cool kids congregate. Through Hype Machine, a music aggregator that apparently everyone knew about but me for years and years, Snakehips songs have almost ritualistically appeared at the top of the Hypem playlist. Majestic Casual, a Youtube channel which accrues hundreds of thousands of views of their songs moments after they’ve been set to gorgeous photos and released, was where I discovered these guys. Peep the MC home page. They’re the name you’ll see on there the most.

Next, they scored Ayo Sato and Bambi for their Forever II video. Two young Japanese  women who, along with throwing up fingers at Japan’s anti-gay marriage laws and tying the knot, have been torching stages worldwide with choreography – this sultry, aggressive Vogue-style choreography – with Madonna, on Vogue and Alexander Wang runways. Google “Ayabambi workshop” and tell me they aren’t gonna take over the world through rhythmic hypnotics…

Then came their friends, Chance the Rapper and Tinashe. Even before the release of All My Friends, the two artists had been buzzing for a while, heading for headliner status in their own rights. After it’s release, that Snakehips song supplants LCD Soundsystem’s of the same title for the the one that comes up first in a search and I know people that love that LCD song so much they’ve played it at their weddings.

Now, the duo brought in Anderson Paak, who, besides being productive in one way or another since 2012 and even before that, quite simply, has Dr. Dre’s seal of approval.

AP comes at the Money On Me with raspy harmonies and a well-woven message about not quite being a baller but still being down to ball, like Timbo’s lyrics “The Way I Are” and Joe’s classic “I Wanna Know,” but with this sort of “low-key” hype. I know that sounds oxymoronic, but hear me out:

A “laid back in the cut” demeanor emanates, from both Paak and the song itself, which isn’t apathetic or unprepared, just eased up. AP is comfy and content, being with a woman he’s enchanted by while the slight guitar strum and wavy tones knit into the beat, taking things from the “gliding past Venice palm trees” vibe to “totally turnt at Lure” pace, with some nasty trap hits and bass knocks and ad-libs.

This vibe is one that I covet, not only as a “cop tickets, no matter what” fan of Snakehips, but as a video editor. Their beats are layered like a Gargantuan from Jimmy John’s, where windows are left open to let a longer clip ride and unfold or spots to chop up shots and flutter all sorts of footage, and those windows are often one in the same.

Their applicability to all genres is unique, even in a time and space where a gang of good artists are mashing up all sorts of sounds that come out indeterminate and I’m slowly making peace with that. With regards to Snakehips, Anderson Paak and Money On Me, I’m betting big on ’em being a household name before 2016 is through, especially with Snakehips dropping their All My Friends EP on April 15th.