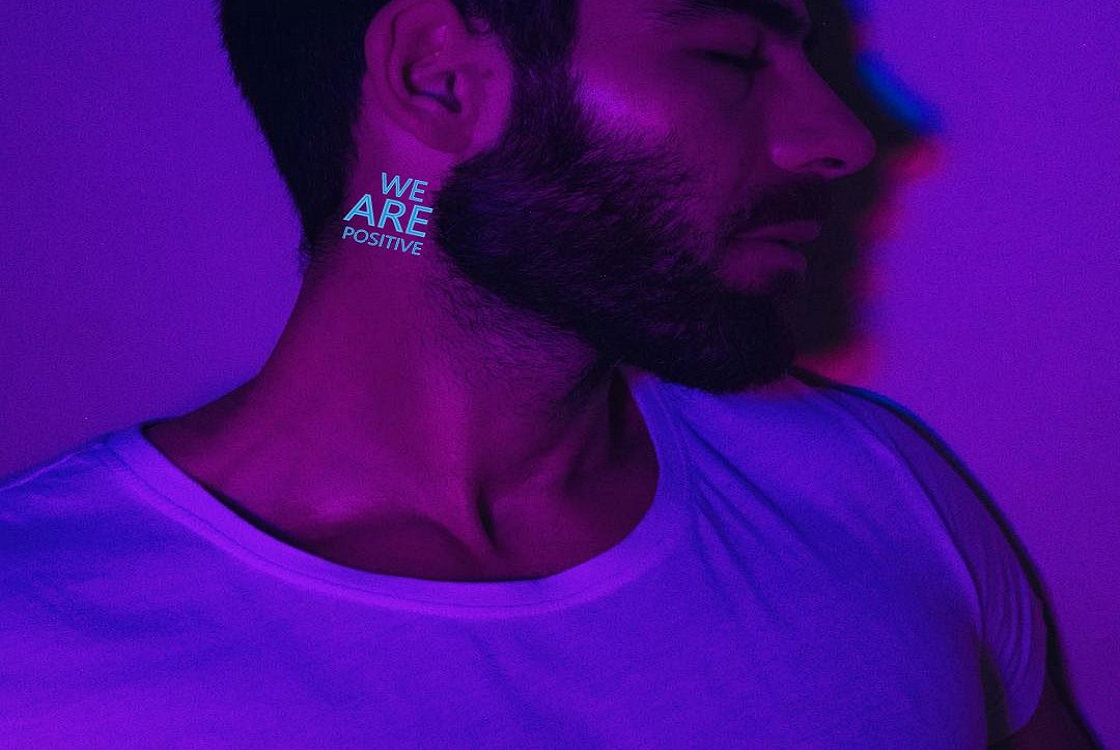 [What’s it mean to be positive? A lot this year people told me I’m as negative as they come. Which messed with my head. So, I decided to use my collection of the year’s best rehab pop to highlight three sotries of three men I cared for in my underground cancer railroad during their chemo treatment to show how positively was exploding out our hearts. Sometimes literally. Part 1 is Hamid’s story. Check out Hamid’s full playlist on Youtube and come back next week for Part 2.]

out the salon chair. His legs kicked up in the air as he splatted on his ass, nearly took out Robbi in the process. Hamid got up, looked doey-eyed and gave me a kilometre-wide smile. We communicated in Jay-Z: he brushed his shoulder, gave me 9 digits twice, 4 digits jazzed-hand across his temple, and then a double thumbed swag slide at his chest. Was our way of saying ‘I got 99 problems, but I ain’t one for me’. Robbi slammed him down in his chair, glued down the last touches of the beard weave and started to paint it blue. Hamid squealed, danced in his seat. I think the MDMA was kicking in.

TAKE A DIAMOND THROUGH THE SHADOWS

Good. Hamid needed it. Every night I’d climb over the pillow wall in my bed and see him tracing the contours along his new chin, encircle the scars where the top surgery was. And he’d cry. He was missing something. But it wasn’t his breasts. Never. Wasn’t his blood, even though he was exiled from his relatives in Algiers and Paris because of his decision to become a man. Was his beard, the pelt that covered his nipples. Testosterone’d given them to him, I’d even been injecting it in his ass weekly the past 7 months. But it’s been 5 since he started to transition. 5 years of becoming a man. Testosterone gave it, Stage 3 Cancer took it away. He’d had a 100% chance of being the man he always wanted to be, only a 17% to live and see who that man’d end up being. Mine was 7%, sometimes 11%. Math margin of errors. Heh. We were going out tonight because Hamid needed to be a man, and I needed to be a lady. He was going to shake his disco tits off, I was gonna strap mine on.

USE IMAGINATION AS A DESTINATION

I CAN’T IMAGINE ANYONE

I took Hamid to Nana in Bangkok. Where I knew a bunch of ladyboys. Knew is not all of the emotions, or any. We were heart-buddies. One day I exited the BTS on my way to Bumrungrad International and my initial chemo appointment. I wanted any reason to skip it. I was walking by their hair/massage parlor, and let my brain get seduced by their catcalls. Sat down in their parlor. Met Robbi. Kinji. Rosaia and Amada. Laughed. I hadn’t laughed in 5 months. Anxiety ate my aorta, all hours in the day. I never admit my anxiousness. But with them, I aspirated all my emotions in 8 seconds. You know people who make you know home even when–like me–you have none? They were mine when I was hyperventilating. Maybe it’s because I’ve always been genderqueer. Maybe it’s because with them I could drop all this masculine posturing I had to do to survive, to battle and get the treatment I needed. With them, I could let go, give into the woman always voiced in my veins. An hour passed on their couch. Then 6. I admitted I’d skipped my chemo and Robbi stood and jujitsu kicked my shin. Go, now, she said. And in 20 minutes it was me and 4 arab ladyboys sitting around gossiping as cyclophosphamide, doxorubicin, vincristine and prednisolone slid around in my veins. They gave voice to the woman inside me, when the medicine normally would’ve rebirthed the man I never wanted to be.

HE TRIES TO BREAK THE MOULD

A LIFE CANNOT BE TOLD

Hamid had never met my ladyboy crew. I’d known Hamid when he was Hamida. I’d held his hand at what he said was his second doctor’s appointment when we both lived in Seattle. Then suddenly, he up and disappeared. Last year, I met Hamid on Grindr in Bangkok. He was a beautiful man. He made me serene when I always am on edge around men. His masculinity wasn’t toxic. He cooed and soothed it, not stabbed around the air. We had a seven week, torrid trample through the sheets. At night he liked me to rub my hand through his beard. His beard was everything. You don’t understand what a beard means to an arab boy. It’s like a hairy bat mitzvah. A quincenera for the chin and cheeks. Traditionally, first full beard was the time when an arab boy became a man. It made him mature. It made him in control of his life, his fate, his sexuality. And when you’ve always been a queer gay muslim arab boy trapped in a woman’s body, a beard means exponentially moreso. I’d rub and kiss it, hours on end. I liked how it gave him pride. And I saw as he traced his new chin these days looking to see where it’d gone. Like it was a phantom limb. He’d lost his manhood to the cyclophosphamide, doxorubicin, vincristine and prednisolone and I was gonna get it back. Enter stage right: Robbi, MDMA, and a slutty evening.

MY HEAD IS SPINNING AROUND

EVERY LITTLE NOISE IS TOO LOUD

We were going club kid. Club kids were a 90s NYC movement. Rough around the edges, they played with gender. Gender became a color-explosion caricature. Masculinity, femininity, androgyny, what the fuck were those? Club kids straddled the line between whatever they wanted to be at the moment. To be sexy in his mind again, to be sexy in my mind again we had to paint our bodies up. Beat our mugs. Hamid needed sex. I needed sex. I don’t know if you know what it’s like to live with a less than 20%, 10% chance to survive; but it takes a level of positivity mere mortals can’t even fucking imagine. Raising your head. Walking to 7/11. So much positivity. And we are positive! We laugh in the whites of death’s eyes. Thats why it’s always hurt me when people say I’m not positive. Bish, do you know what I do every day? Do you know what I do, have done with hundreds of cancer and hospice patients over the years? Power of now? You going to beat me with that book? Fuck you. I know what every second means more than you’ll ever. But I don’t just leave at that. All the men who come through my underground cancer railroad, who stay with me during treatment: I make them get laid.

MAYBE I COULD USE SOME HELP

YOU GOT THAT POWDER ON YOUR FACE

Cancer patients want to get laid. Everyone wants to get laid. But it’s hard to be sexy in your own cells when you’re vomiting. Carrying Tide detergent in your backpack in case you stain your pants walking about. Bleed out, like randomly. Sweat until the three shirts you’re wearing because you’re cold as fuck all smell metallic. Your pheromones smell like medicine and your penis pops away. A long ways away. It was doubly hard for someone like me, and exponentially harder for someone like Hamid to think—no, know–they are sexy. I always had to be this man, man, man to get through the day, to protect the ones I loved in their treatment. And I saw me becoming aggressive. Not collaborating with the hearts and voices around me. And I never knew who I was except when I sank into Robbi’s couch and let her and Rosaia rattle off a week’s worth of Nana district drama. But, Hamid, his diassociation was greater. Never would I compare my identity crisis to his. Imagine spending 5 years losing blood (literally and metaphorically), thousand and thousands of dollars, jumping through hundreds of medical hurdles and loopholes; and then finally getting the wish to be the arab capital M man you always knew you wanted to be since you were 6. You had it, you had it. You almost had it and then when you were on your last stages a doctor tells you you have Stage 1 Lymphoma.

SOME BOYS HATE THEMSELVES

SOME GIRLS HATE THEIR BODIES

We are positive. We are courage. Do you know what kind of positive courage it takes to say ‘No, Doc, I’m going to become me before I get treatment. Because, you know, what if I don’t make it? I want to die me. Want people to call me how I want to be called. No one can deny me, put my body in a dress’. And then to have it, the symbols of it, a beard and chest hair ripped away like some cosmic joke by chemo? I kind of knew. I soaked in his pain by empathy and osmosis. I held him at midnight and felt his body start to give in, give up. He wasn’t going to make it. Hell no. He wasn’t going to make it if he didn’t feel sexy again. And one night I clenched my hands around our sheets and made him swear he was going to see another day. Because I didn’t think he would if I didn’t make him morpheme blood pact. Oaths were everything to him. That was last night. Today was today and today was the day Hamid met my ladyboy crew.

UNTIL THE MORNING THIS HOUSE’LL STAND

SO PUT YOUR TEARDROPS IN THE BOX

Robbi doused coloring on Hamid’s beard. Bright blue. And then he ripped off his shirt. Pushed him back up against the chair. Licked his nipples like a beast. Hamid smiled, eyes rolled. Then Robbi got out the body paint. Covered his chest, erased the top surgery scars with bright blue, curly-cue, hair-like 17s painted all across his chest. With some human, lacefront hair glued on for good measure. We, Robbi and I, knew that Hamid couldn’t be the man he wanted to be right now. Pretending he could, would be a disservice, inhuman to his man-humanity. Club Kid aesthetic skewered his gender, made art out of his dire chance of survival. At the same time, Rosaia strapped me, quite literally, with bondage toys to her salon chair. I was having a pretty hard time with my 7% chance to exist, too. So, she slapped a breat plate on me, gave me a red lacefront beard and wig with bangs and drew 7s as chest hair around my now covered pecs. And then with the MDMA kicking in everyone in the Ladyboy Crew stodd and danced to Tove Lo and The Shoes until it was time to leave and enter Babylon Club like the heroes we were.

THESE PEOPLE ARE MY HEROES

THEY LIGHT ME UP WITH FLYING CLOUDS

[ F I N : CHECK BACK NEXT WEEK FOR PART 2 ]
PHOTO CREDIT: HYPERDECADENCE