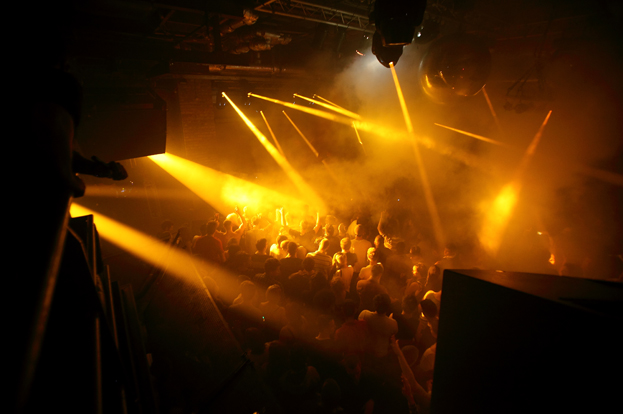 Too much sugar rots your teeth. Losing my teeth, however, is a risk I am willing to take in order to gorge on SOPHIE’s bubblegum pop/future bass music hybrid. Last night at Fabric, London (2/05/2014), SOPHIE delivered one of the most unique and exhilarating 45 minutes of club music I have ever heard.

Last October, I saw Evian Christ supporting Nicolas Jaar at the Barbican centre. The Yeezus collaborator tore through a set of soviet transmissions and cold, industrial rhythms. I was immediately blown away and could not comprehend fully what I had just heard. Last night at Fabric, SOPHIE replicated many of those feelings, and like the Evian Christ set, delivered us something that in only many years to come will we fully comprehend.

Opening with beats and synth stabs that molded around hip hop refrains, SOPHIE threw in many early curveballs with none of them employing the distinct female vocal that made ‘Bipp’, SOPHIE’s 2013 breakthrough single, such a unique auditory experience. At times the music became frantic and beats were played at break neck speed – there was no respite, just straight attack. One could say musically the opening segment was highly reminiscent at times of the work of another future bass pioneer, Rustie, and some tracks had that 8-bit videogame soundtrack feel. But the samples used to compose and build tracks were beyond my comprehension. I found myself in awe and entirely confused simultaneously at what I was hearing.

Midway through the set, the distinctive female vocal however appeared and, SOPHIE’s set shifted towards the sugarcoated, ‘poppier’ side of the producer’s music. Even then, in this supposed ‘poppier’ segment, there were minute-long bass drones that ripped through my body in the same way that the feedback/holocaust section of a My Bloody Valentine show would. Even though ‘Bipp’ was not played, the tracks showcased suggest that SOPHIE is not a one hit wonder, nor will the producer crumble under the huge hype that is currently building. The ‘poppier’ tracks aired were highly infectious, especially (what I am calling) ‘Lemonade’, ‘Never Say Goodbye’ and ‘Hey Cutie’. ‘Hey Cutie’, which was recently removed by Numbers from YouTube after an airing at JustJam, saw the crowd dancing and jumping in unison at the insanely catchy bubblegum-pop chorus: ‘hey cutie, yeah, even though you’re so far away, I feel your hands round my body every time you think of me’. With the future bass production and the sugar-sweet, maximally modulated vocals, ‘Hey Cutie’ may be one of the most unique pop songs to come from Britain in an extremely long time.

For 45 minutes I had an ear-to-ear smile due to SOPHIE’s brand of pop/future bass. And in my opinion that is the best way I can describe how this set made me feel. Unique, fun and extremely joyous.

Check out ‘Bipp’ below.