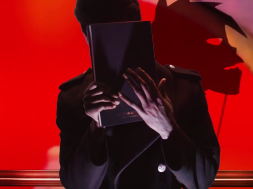 In case you missed it, the Gorillaz have returned in glorious fashion on the eve of a historic moment in American history, as evidenced by the video for the band’s first new track in six years. Stirring up visuals of the now infamous Golden Elevator, “Hallelujah Money” examines the relationship of our new president and the current relationship our country has between power, greed, corruption, and compassion. It’s an interesting sound upon first listen, but each procession through emboldens the tones attaching to my eardrums – quite like the Gorillaz music of past.

“In these dark times, we all need someone to look up to. Me. That’s why I’m giving you this new Gorillaz song, a lightning bolt of truth in a black night. You’re welcome. Now piss on! The new album’s not gonna write itself.”
-Murdoc.

The Gorillaz have a long standing tradition of collaborating with other talented artists, and “Hallelujah Money” is no different, featuring the crooner vocals of English composer, poet, multi-instrumentalist, and Mercury Prize winner Clementine, who The New York Times honored as one of twenty-eight geniuses who defined culture in 2016. Check out the video below.

Protests against Trump have risen over the weekend with more than 2.5 million women taking part in marches across the globe to in stark opposition to his clear business conflicts, lewd and sexist behavior and comments toward women, and immigration policies that are marked by xenophobic and hateful rhetoric.

Dark times – u need someone to look up to. Me. Here's a lightning bolt of truth in a black night. Now piss on! New stuff won't write itself. https://t.co/tOqYnXqrU2

0
0   0
previous [FEST NEWS] Sasquatch! Festival Is A Beautiful Weekend; Is LiveNation Hell-bent On Ruining it?
next [CHINESE NEW YEAR] REHAB POP: WHEN I WAS DONE DYING