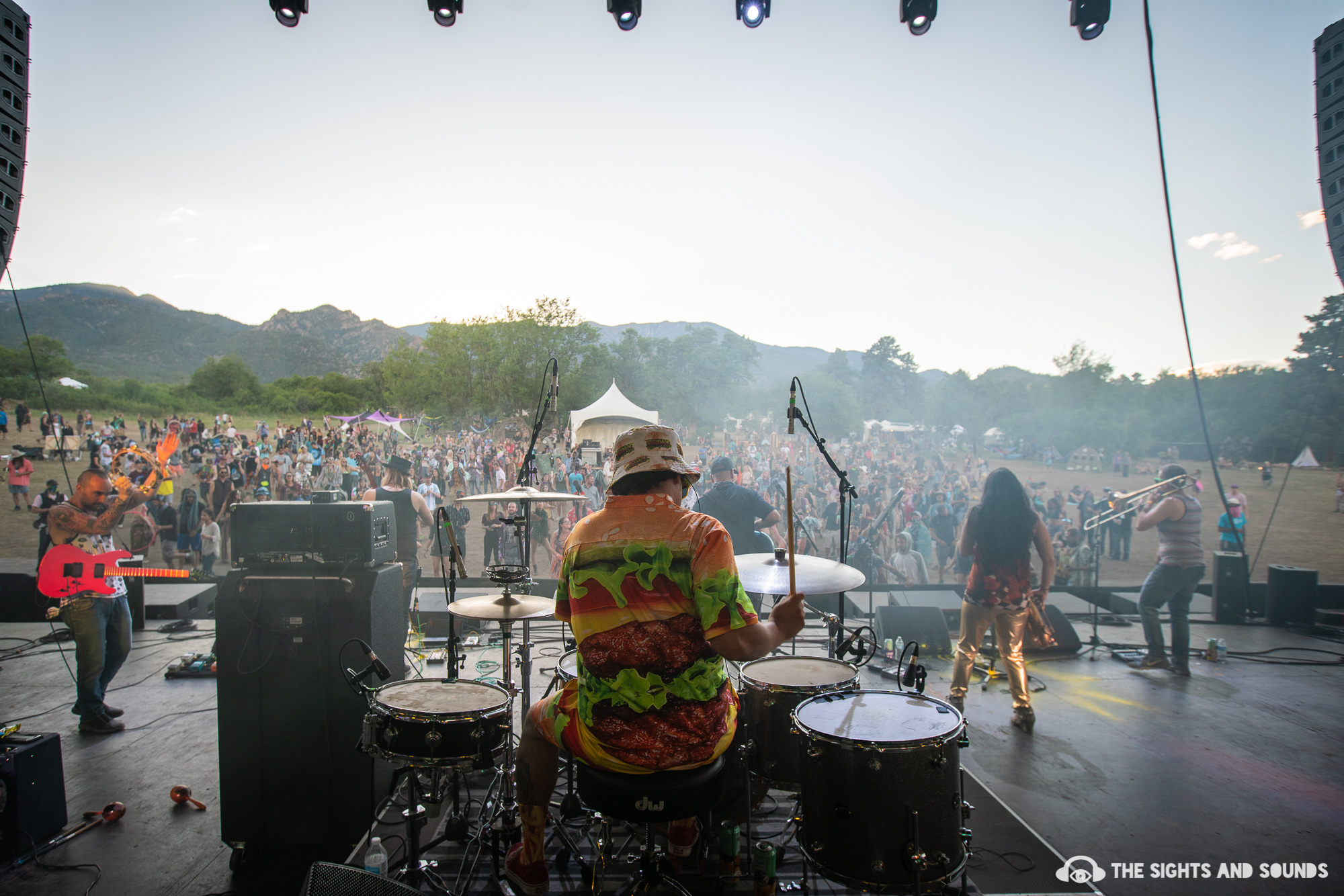 Playing to their strengths over an array of emotion-driven tracks, Denver live electronica group Tnertle brings the heat with their new album Burning Down The Sun 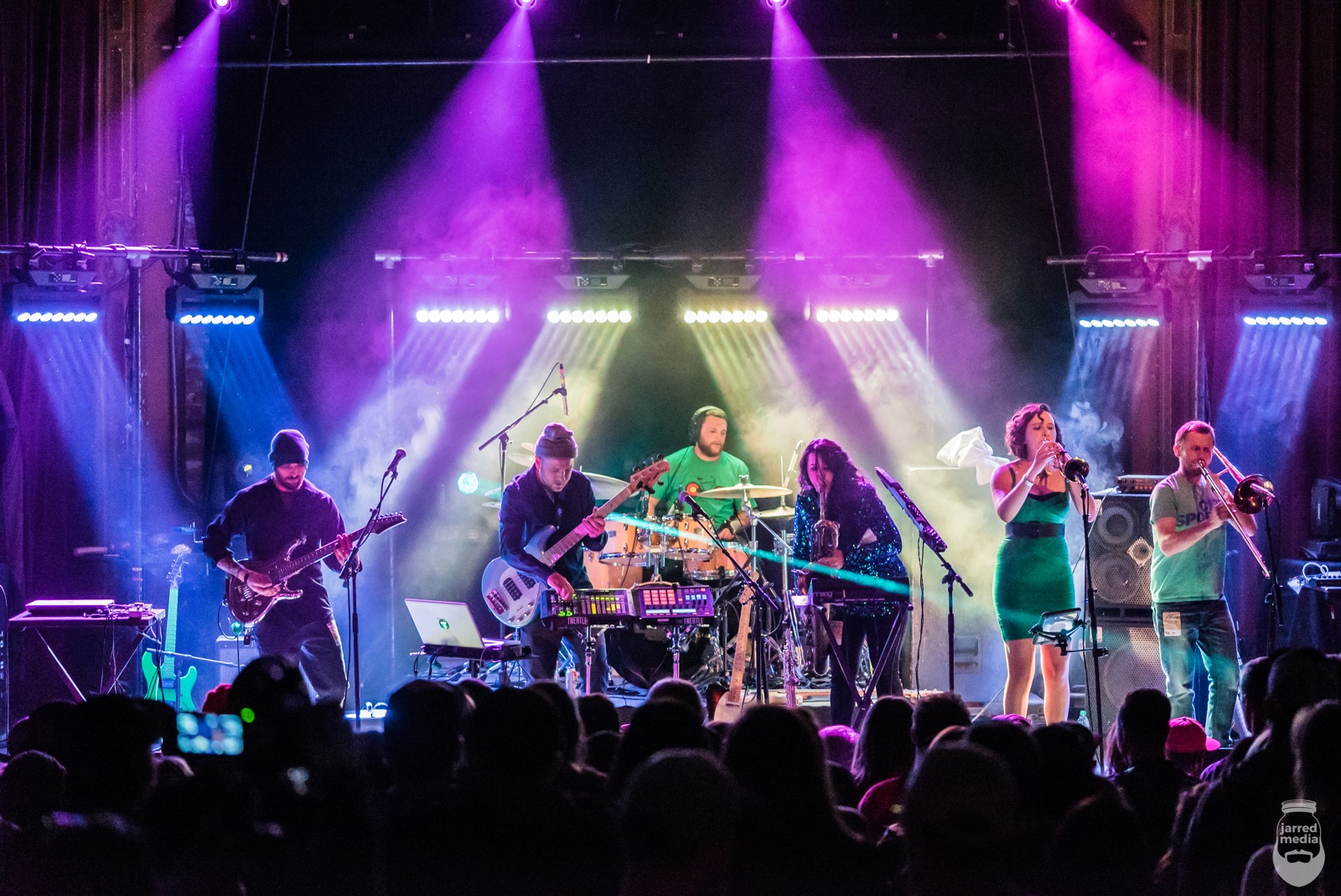 Pulling from a wide range of genres and styles, Trent Campbell’s brainchild Tnertle has delivered an excellent project sonically capturing the tale of a turtle named Enzo on a mission to save his planet from an exploding sun. Each song brings life to the journey and expresses a different element or theme from the story. Pumping tracks full with bodacious horn lines and spacey synths, the traditional Tnertle sound is prominent throughout the album; fans will note that they have also played around with a few hip-hop and internationally influenced songs as well.

The founder and lead turtle of Tnertle, Trent Campbell, sat down with us to further explain the concept behind his album, a brief history of the group, and their upcoming tour.

Thanks for taking the time to talk today Trent! So the band was originally just you and your drummer, Kyle, right?

Trent: It was just Kyle and I, yup. We call him Square Phil; it’s his stage name. Yeah, so 7th grade we started playing rock and metal and played all the way through high school. We then went to college together at the Berklee College of Music. Still played rock and metal, but after we graduated our band broke up. We were out in San Fran at that point, after living in Boston for college. I moved back here and started writing different stuff like hip-hop and funk beats. We decided we wanted to take it live, so Kyle moved back from San Fran. We did it as a duo for about a year and a half or so. We then added an MC, Ray Salazar, so he’s been with us for a good five years now too. We added a horn section after that, then guitars, and now we actually have a cello player that sits in quite a bit. It’s just kinda become a big band after starting as a duo.

Will you talk a little about the concept behind the name Burning Down the Sun?

Trent: Yeah, so once I had all of the songs written, I kinda listened back and chose eight out of the 15 that we had recorded to go on the album. It kinda had a spacey vibe to me, so I just wanted to do something a little different this time and create a story that goes along with the album. So I listened to each song and got a vibe for what each meant to me. What kind of emotions is this putting off? And then just working it into the story, which is about a race of turtle, specifically about this one turtle Enzo, and he’s going to burn down the sun because it’s about to explode and he doesn’t want to ruin their galaxy. So they’re going to slowly burn it down and move to a new solar system. It’s about the mission of burning down the sun and some emotions and storylines that go along with it.

Interesting, so it sounds like you wrote the album then came up with the story after?

Trent: Yeah, we want to eventually have visuals behind us with the storyline and play the album as a whole. When I create music I kind of just put it out there, and whatever’s coming out of me is going to get captured. I give it a pound name, like a placeholder, and it gives me some freedom for writing the story later on because I’m not locked into anything.

I’ve read that you have been holding on to the song “Cropstopper” for a few years now. How did it find its home on Burning Down the Sun and not an earlier Tnertle project?

Trent: So I made it in Reason in 2009, and it was just a beat that I had and I liked. We played a really long set in Gunnison for a 4th of July show, one time, and I was kinda like ‘what else can I put in this set’ because it was like a 3 hour set. I played it with just a drummer the first time, and everyone was like what the f**k was that!? And it’s been in every set since then, which was like three years ago.

I feel like Apollo’s Outpost captures the sonic essence of Tnertle really effectively. What went into writing that one?

Trent: So, it usually starts from one idea, and this was a patch on the Prophet 6 synthesizer – it’s the first sound you hear in the song. And then, I always just like to let that roll and build off of that. When I recorded the live instruments, I usually just have them double what I have already recorded with synth instruments, but on this one I remember having them do some different stuff that I hadn’t already recorded. It definitely has a storyline of its own; where it takes you through different emotions and dynamics and it really is a trademark Tnertle song with the big horn melodies, funky groove, and the little breakdowns. 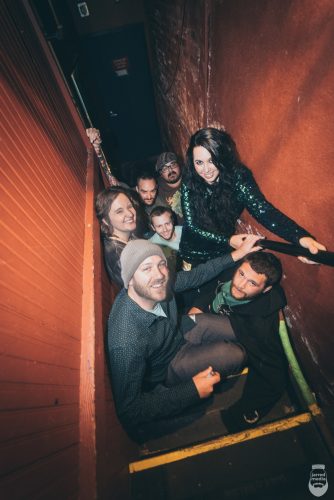 So are you writing the music entirely on your own, or does the band help out with writing?

Trent: I give them some spots where they do some improvising; I just ask them to do some soloing over the song one time; I like to take it and cut it up to glitch out their horn stuff to make it a little less organic. But usually they’re just playing the melodies that I’ve written. With drums, sometimes we’ll just loop a section until we’ve got it, then just move on to the next section. It can get choppy, but it’s fun to really dial in on stuff and not let it get lost. Maybe one day we’ll do a studio album where we all play together, like a live album would be cool.

So tell me a little about the features on the project.

Trent: Ok, so we’ve got the classic Raymond Salazaar – he’s on three of the songs. On one of them, he has one of my favorite verses from him that mentions like 15 different ski resorts. ‘Sounds Like Home’ is the song; I’m excited to play that one since we haven’t played it live yet. Then Keith Snow did a verse on “Petrichor Feeling”. He’s also a friend from Berkeley in Boston. He’s currently on tour with Billie Eilish, so I believe he’s her Ableton playback technician. I don’t think he plays the cello for her, but it’s a good gig for him. But he loves playing with us and he’ll be with us on December 8th at Cervantes at the album release party.

What do you want listeners to take away from this album?

Trent: I guess in general, when I listen to a new album from an artist I like, I have expectations that it’s gonna be some of the same with a new twist. So I think it’s kinda that. Where listeners can recognize that its Tnertle, but it’s new fresh stuff. There are definitely a couple songs that are a departure from our typical sound. Like on “Petrichor Feeling”, it’s kinda got a Mike Snow vibe. And with ‘Sounds Like Home’, we try one international flairy song and that one has a French twist to it. So the people that liked our past international songs, I think they’ll like that one. Then we have a rock song on there pretty much, “Enzo’s Attempt”. We just use a bunch of different genres and there should be something for everyone on there.

Are there any spots on the upcoming tour that you are especially excited for?

Trent: Yeah, San Diego was a nice show last time so we’re excited for round two there. Also, in LA, we have a much bigger bill this time so we’re excited to share the stage with our friends Bellavolent and TV Broken 3rd Eye Open. We also have Lake Tahoe at the end; they have a big casino, so last time we won a good couple hundred dollars on roulette.

Are you planning on saving the debut live performances of the new music for the Cervantes show or will you be playing the new stuff throughout the tour?

So how did you get involved with Super Best Records?

Trent: I actually interned with Michal Menert in 2013ish. I was just helping out with little stuff; I don’t think he had created Super Best yet. It was before the Pretty Fantastics, so he was doing his solo run and I remember him headlining the Fillmore. I was basically a personal assistant back then. He saw us open for Rjd2, and we had the horn section and Ray and Lily were rapping with us too at the time. He enjoyed it, and created Super Best shortly after.

If you were a turtle, what species would you be?

Trent: Well, the first thing I think of would be a Sea Turtle…they just live in super nice environments, hanging around the coral and stuff. But we did research the Mata Mata turtle, which is a kind of turtle and the name of the last full length album we released. It has a wide head, and the way it eats is it just opens its mouth and uses suction to suck fish into their mouth. But yeah, I think I would have to go with a sea turtle. I’m pretty sure they live a long time too, like over a hundred years. But yeah, when they lay their eggs only a small percentage of them make it back to the sea. So I would have to be getting busy as a turtle.

Click here to find tickets to their West Coast Tour!

Follow Coastal Kites Through the Savalin Forest with Debut Album