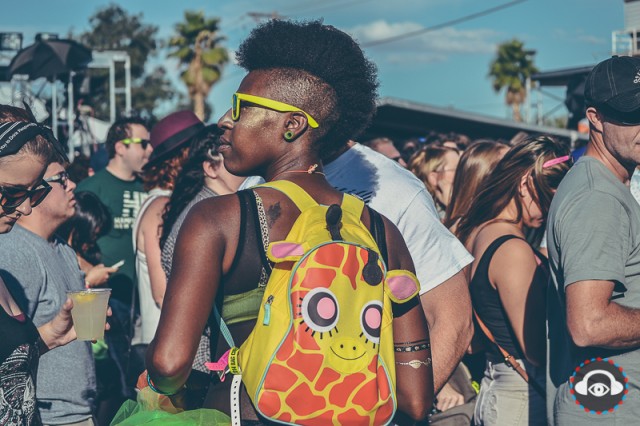 Life is Beautiful descended on Las Vegas in a flurry of music, art, and food. Downtown Las Vegas was transformed from a few blocks of shops and restaurants into a work of art of its own, as local artists took to the streets (quite literally) and put their mark on the sides of buildings.

It’s interesting, to see the way the festival changes this town. The murals on the walls, the massive stages in the middle of the street… it feels less like a city street, and more like an experiment. Not in a bad way, mind. But the whole thing feels so dreamlike, so surreal. You’re not just shuffling from stage to stage, you’re wandering in this experiential artscape, discovering something new every time. Maybe it’s just a clever turn of phrase tucked away on a poster on a light pole. Or tacos from a solar kitchen you hadn’t noticed the day before. Or maybe just a dapper gent pedaling around an advertisement for gin. But the best part is, when the stages come down and the amps have long since quieted, you can still feel the echo of Life is Beautiful in the streets. The murals and some of the art installations stay up after the festival is gone, meaning the event lives up to its name in the best of ways. Every year, the festival helps beautify Las Vegas. 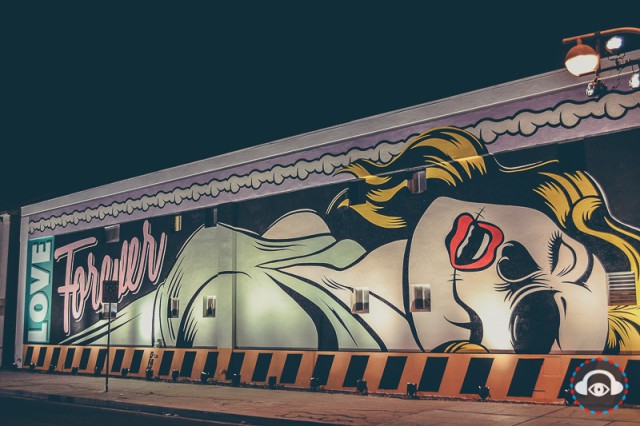 Pardon my idle musings. On to the good stuff.

Along with the aforementioned murals, this year featured guest speakers to complement the weekend’s offerings. Visitors lined up hours in advance to hear the political statements of punk-prostestors Pussy Riot, or clambered in to hear the basics of speaking Dothraki. Microbiologists. Actors. Chefs. Magicians. CEOs. The stage offered space to an eclectic lineup for the aptly-titled Learning Series. But best of all? The venue itself was peppered with art exhibitions. Walk in the doors, and a lithe dryad hands you a glistening mâché apple from his tree. Phone booths retrofitted as ‘prayer booths’. Antique chairs propped up in a corner, with painted tentacles bursting from behind them with a kind of Tim Burton and Lovecraftian glee. It was nice to see that even just waiting for an event to start gave you a chance to immerse yourself in the culture of local art.

The food shone this year in two ways. One, each day provided several celebrity chefs plenty of stage time at Container Park, where they were able to do a mini-demonstration of a dish or two to the delight of the collected gourmands. My favorite, by far, was Rick Moonen deftly assembling a delectable salmon dish with the assistance of the adorable Kimbra (whose Life is Beautiful set was later that evening). Secondly, the grounds were peppered with a ton of food stands (giving this Midwestern transplant fond flashbacks of the Taste of Chicago.) Particular highlights were the Three Chili Chicken from another Chicago transplant Lao Sze Schuan, as well as home runs from locals Honey Salt and Kuma Snow Cream. 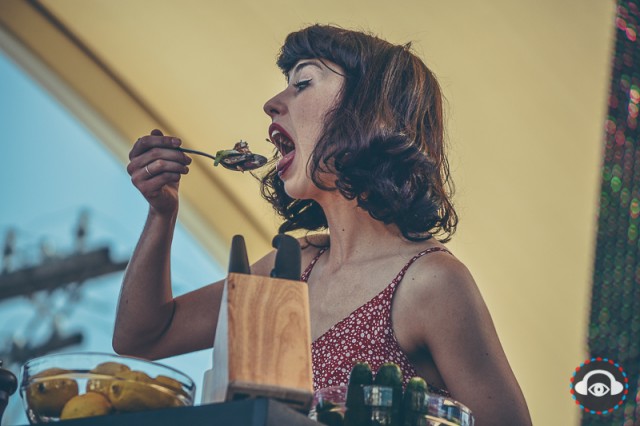 But, of course, the core of the Life is Beautiful experience is the music.

First, the headliners. As Kanye took the stage, you could almost feel the inquisitive vibe from the audience. Would this be another stage-abandoning rant-laced debacle, or a straight-up kickass Kanye show? Luckily for us, it was the latter. Yeezus was humble (well, humble for Kanye, anyway), treating the attended to all the hits we came to hear. There was one odd little spoken word bit in the middle, but it was more thankful and insightful than it was inflammatory. ‘Jesus Walks’ and ‘Gold Digger’ were my personal highlights, as well as the encore where he hit us with ‘Niggas in Paris’… twice.

Outkast similarly had a monster set, getting the crowd salivating right out of the gate with an explosive show of ‘Bombs Over Baghdad’. They had a nice mix of some of their older stuff as well as their “solo” jams from Speakerboxxx/The Love Below. And, as was to be expected, the crowd sang along quite heartily with ‘Hey Ya’, with more than a few people shaking it not unlike a Polaroid picture.

Wrapping up the weekend, Foo Fighters positively destroyed the place. They played pretty much every Foo hit you would want, like ‘Everlong’, ‘The Pretender’, ‘Learn to Fly’, and so on. They treated the crowd to a few tracks from their upcoming album, as well as covers from the Rolling Stones and Queen. Even though they were coming in with a two-hour set at the end of a grueling weekend, the crowd had all the energy of opening night. 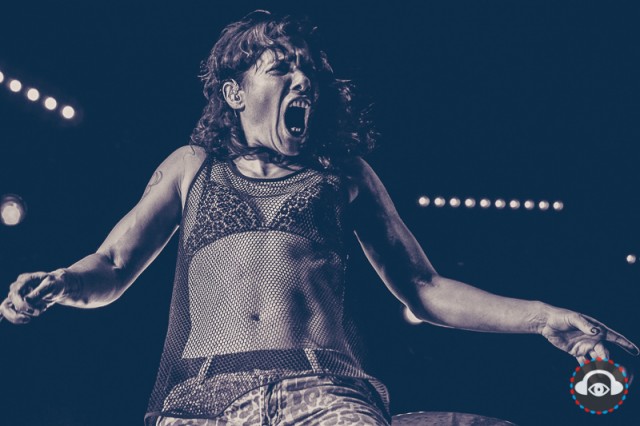 The sub-headliners were just as successful. I wondered how well Lionel Richie would go over with such a young crowd, but I was more than pleasantly surprised. ‘Hello’ still has all the tear-jerking power from decades ago, and when he dipped into Commodores classics like ‘Brick House’, the crowd (yours truly included) positively lost their minds. Vegas boys Panic! at the Disco and their legions of dedicated fans made for a great show, with hits like ‘I Write Sins Not Tragedies’ electrifying the crowd. Skrillex, for all the arguments his name evokes, always puts on a great show. After all, not everyone can pull off rocking a giant spaceship as a DJ deck. And the increasingly popular Arctic Monkeys played the most interesting show of the festival for me. While everyone else on the main stage had crazy lights, or stage dancers, or inflatable props, or a frenetic video screen, or all of the above… Arctic Monkeys played a very subdued show. It made the whole experience seem intimate, making songs like ‘R U Mine’ feel all the more lyrically powerful. 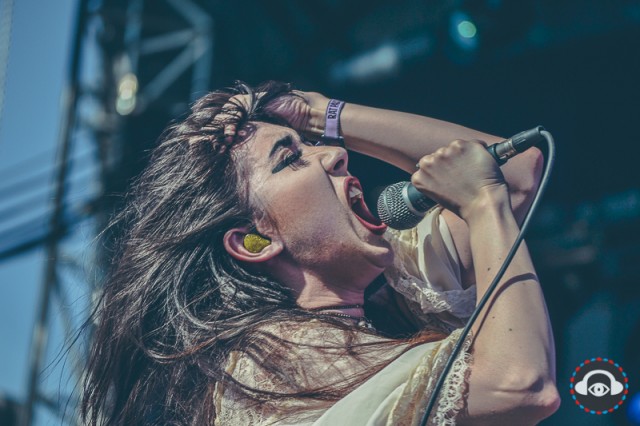 Other highlights from the roster included Nostalghia, whose goth-punk melodies grabbed the attention of world-renowned chef Hubert Keller. By far the most fun band to watch was Matt and Kim, who seemed like they were having more fun than anyone in the state at that moment. And, hippie-rock legends The Flaming Lips are always fun to watch, as you never know what bizarre hallucinatory homage you’ll be treated to. This time, for instance, we had people inside giant mushrooms, inflatable donuts thrown out to the crowd, and an on-stage proposal preceding ‘Do You Realize’.

Life is Beautiful was a gamble for Downtown Las Vegas, pun fully intended. But now with two years under their belt, they’ve proven it a successful venture. Not only are they luring more and more acts to their banner (as well as 30,000 cheering fans), but they are helping transform the city itself.

0
0   0
previous [ELECTRONIC/HIP-HOP] FEKI - SAFE RETURN
next [PHOTO RECAP] See You In The Pit: Behind The Scenes With Upon A Burning Body