Sun, drinks, music and bikinis. Four simple words that communicate the pure summer bliss that embodies Hangout Music and Arts Festival. It’s a music festival, it’s a place to let loose, and it’s an experience that will have you coming back for more year after year to celebrate on the sandy beaches of Gulf Shores, Alabama. Hangout took place over three days on May 16-19th this year, once again showcasing that if you cater to the audience and artists first and foremost, you will win every time. From the app, to the venue, to the amazing showcasing of artists that included the likes of The Black Keys, Outkast, Tegan and Sarah, The Killers, and many more, Hangout Music Festival is one summer festival that should be on every music lover’s calender. Hit play on our official playlist and read on for our full recap below.

Chevrolet Beach:
For those of us who wanted to catch a dip in the beautiful Gulf, Chevy Beach was just that! Personal Cabanas and Gulf access made this refreshing getaway a relaxing breath of fresh air

Volleyball:
To the naked eye you would have thought a tournament was in play! With guests coming from all over the U.S., this attraction was a competitive workout and a way to make friends. The idea of Volleyball and live music was brilliant, just brilliant!

Camelback water stations:
Talk about a marketing campaign. This station brought Camelback supporters together from all over the U.S. with similar Hobbies. The Camelback stations were packed with guests supporting our mission of going green!

Chevrolet Oasis:
For some, this was a lifesaver! This attraction allowed guests the opportunity to recharge their phones, all while enjoying a healthy breath of fresh air in a Shaded environment.

Catch a Chevy:
Well you cant beat a free ride, right? Easily accessible, and extremely frequent, These 2015 models were a great way to see what Chevy had to offer as well as arrive on time and in fashion!

What an Application! The Hangout Music Festival App. Was by far the most organized and user friendly app I have seen thus far. The app was a fan favorite allowing users access to: 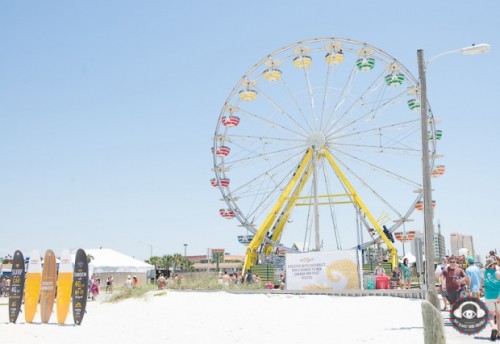 The Venue
Talk about 6 stages all packing a creative punch! One thing that makes the Hangout Music Festival so special are it’s variety of stages. Each stage brings its own personal punch and is sure to strike commonality with its guests. Whether you’re a small venue enthusiast or a casual beach bum this festival has everything. From the smaller Red Bull Sound Select stage to the larger Main Stages, there was something for every fan here.

VIP
Personally I thought The Hangout offered a more exclusive VIP area than any other. Where else can you enjoy the comforts of a private pool on a beach? Packed with Private bars and beach chairs, for $1000 I definitely saw value.

Wiz Khalifa opened up with “the thrill” an oldie but a goodie. For a 5pm kickoff, Wiz’s show gave off that feeling of a its “5 o clock somewhere” type of feel, as everyone seemed to finally get loose. At one point the show offered a number of blown up alligators which got everyone engaged and involved. Wiz even connected with the audience proclaiming his love for his fans and marijuana; shortly after, he toked one down and passed the remains to his homies in the crowd. The show set the bar for the rest of the evening acts.

Childish Gambino – What made this show special was the freestyle Donald broke into regarding Gulf shores. It gave his show a little bit of personalization and brought the crowd on board. “Heartbeat” was his most well known track which happened to be interrupted by a missing child alert. The child was found and the crowd rejoiced back to the melody of his tunes.

The Black Keys – I had the lovely opportunity of catching these handsome fellas from the VIP pool and boy oh boy would I say they were quick to impress. They played one of the larger sets of the weekend and incorporated many old jams! 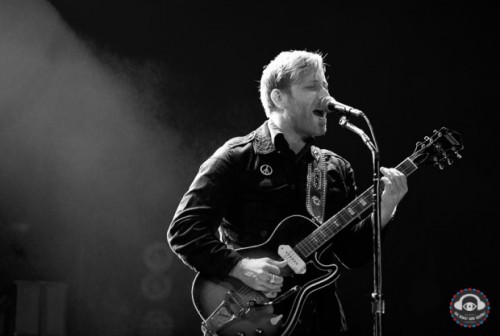 Bad Suns – This southern California rock band was young in age but classic in sound. The newly formed group had a type of funk to them that echoed inside of the Red Bull Sound Select stage! The band was extremely sincere and personal in their delivery, definitely a prospective group to follow moving forward. I believe they have just released their first album, so make sure to go and check it out!

Gemini Club – Hailing from yours truly, Chicago, Illinois, this Indie Electronic band got the Red Bull Sound Select stage rolling. With their dueling keyboards constantly remixing their own music on the fly, this group gets their audience up close and personal. A killer light show and funky melody pave the way for this groups success. I look forward to the development of this group!

The Bloody Beetroots – Have you ever been engaged so much by a group that you wanted to break anything in site? That is exactly what the Bloody Beetroots did. This show was intense; featuring what seemed to be a repetitive theme song strait out of a comic! For those looking to unleash some pain or take part in a mosh pit, this was the place to do it. The group’s Spiderman-esque masks, soft mellow keyboard transitions, and violent outbreaks kept this roller coaster slamming! I personally did not meet one person that was not impressed with this show: #BringEmBackIn15!

The Killers – It’s the F’ing Catalina Wine Mixer! Holy hell was this a show. The Killers played everything from their oldest album to their most recent. Mainstream or not this energetic performance was very engaging. After an intentional pump fake, they ended their show to “Mr. Brightside”. The Killers were brilliant and passionate in their performance. Fans raved all night following this show. To bring them back in 2015 would be a pleasure to all! 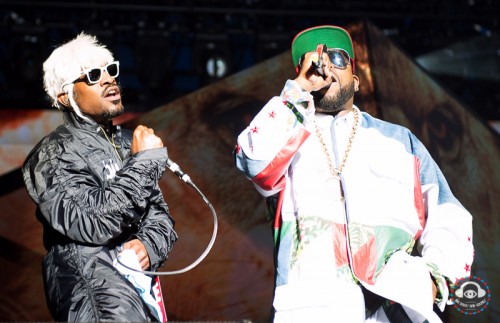 Bastille – Bastille jumped into the 2:30 slot on Sunday, and was just what The Hangout needed to kickstart a lively day of music. This UK pop group put the ‘umble’ in humble; bringing a sense of conformity to their audience. Most of their set hit home personally amongst most of us, well that was until they played “Pompeii” and the crowd erupted!!

Boys Noize – Taking it back to the Boom Boom tent for a bit of Electronica, the German sensation brought it on with a fascinating light show and unique style. Alex strikes me as an artist that tip toes the line of trance. With the continuation of his sets he is one of the best when it comes to blending music.

Capitol Cities – What a show!! Overall Capital Cities exceeded expectations. First off, tell me the last time you saw a group not only open up with their platinum selling hit song, but close with it as well!!! This group is on the rise and I see them as the Imagine Dragons of 2013. Great show to catch at the Hangout stage, as the crowd was alive and vivid! Very excited to see where this group takes their professional career!

Mystery Skulls – So you’re prolly thinking really…no Jack Johnson? I decided to get a little groovy over at the Hangout Stage and Mystery Skulls was just that. At times He almost sounded like a touch of Daft Punk. One thing that made Luis’s act special was his vocals! The dude was kinda creepy with it – but good kind of creepy. His sets were crafty and engaging and created a setting that was very awkwardly pleasant.

Outkast – For a group that I had thought were retired, holy smokes did Outkast bring it on. For God sakes they opened with “B.O.B.” and I think they silenced every hater in the audience as they brought out all the artillery. New school, old school, everything!! Arguably one of the best shows of the weekend, Outkast played classics like “Sorry Ms. Jackson” and “So Fresh and So Clean” The VIP near the Hangout stage was literally rioting, their acts were so fresh! This band brought the fireplaying a total of 24 tracks, isolating members frequently, and strait up brought the funk back to the Hangout!! Can’t say enough positives about this act, excited to see them at ACL in October!!

Overall, Hangout Music Festival was another amazing experience, as all the producers put on an event that once again exceeded all expectations. It’s these types of festivals that keep the spirit of music alive and I cannot wait for next year’s experience already. Check out our full photo recap of the events and if you made it to this year’s event, let us know your favorite memories in our comments section below!