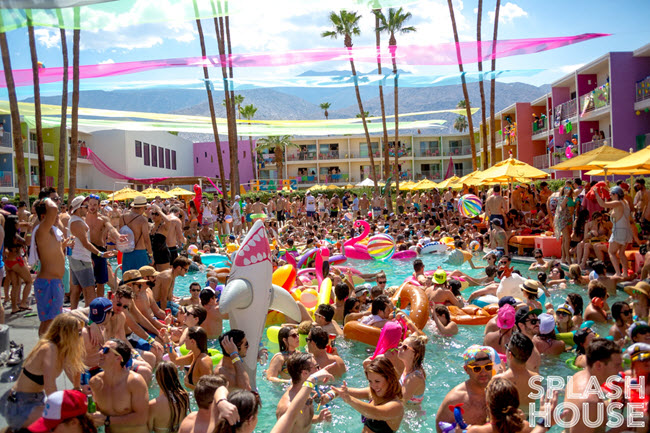 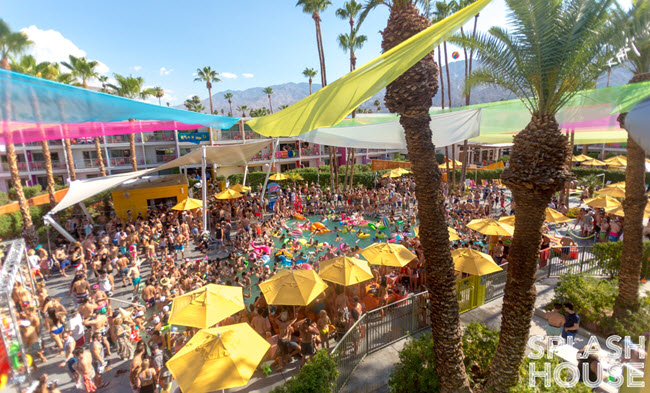 A killer whale. A frosted donut. A green dinosaur. A hot dog with ketchup and mustard. All dancing around in the blinding sunlight, the only ones immune to the brutal desert heat.

No, this wasn’t an acid trip–they were all various creative pool floaties.  This was, however, far beyond your average pool party.

So began what was to be a dreamlike weekend at Splash House, a music festival and pool party extravaganza taking place at three of Palm Springs’s swankiest venues. The Saguaro, the Hilton, and the Hacienda Beach Club served as a technicolor adult playground that offered up some of the greatest things life has to offer in one wet and wild package: tequila, tacos, tropical house and…techno (duh, do you know who’s writing this?).

I could feel the first trickle of sweat down my back not even ten minutes after I climbed out of the cool, dark interior of our car. Goodbye artificial cool, hello fry-an-egg-on-the-sidewalk heat. Wearing more than a swimsuit wasn’t much of an option, even for the most modest of festival goers–not that you find many of those here in the first place. I walked through the brightly colored hallway of the Saguaro and into a time machine; got spat out into a hip, retro-70’s version of Fear and Loathing to the soundtrack of Gina Turner‘s killer Chicago house set. (Side bar: You could never tell, but her computer overheated during her second track and she just played an impromptu set that remained one of my favorites of the weekend.) 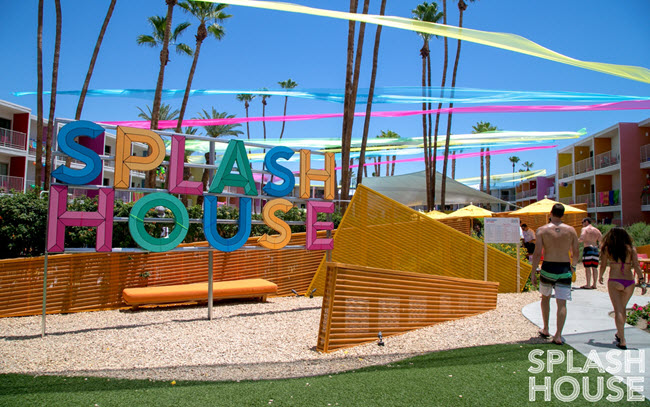 “Could you please take a picture of us?” A bikini-clad blonde girl skipped up to us, gesturing to her friends outside of the pink “Splash House” signature sign. Always obliging of my fellow blondes, we traded turns snapping photos of each other and introduced ourselves. “Your ring is gorgeous!” she exclaimed, reminding me of the most surreal detail of this story–a perfect proposal from my boyfriend the night before. My new friend and her husband had just returned from their honeymoon in Greece, and we proceeded to share drinks and trade stories. They were the first of many awesome people we met over the weekend; the crowd at Splash House seemed to radiate positive vibes that were as strong as the desert sun, and the event was small enough that faces quickly became familiar. I have been to many a festival, but the camaraderie at Splash House was different in a way that was hard to put my finger on–it felt more mature and welcoming than most.

“This is my first Splash House and I think it’s definitely my favorite music festival–and I’ve been to Ultra, Coachella, EDC and all of those,” said attendee Naomi Yiu as we were talking by the pool at the Hilton.

“Honestly, it doesn’t even matter who is playing most of the time because the vibes are so good that it’s fun no matter what you’re listening to.”

But fear not, music snobs–the lineup was certainly not lacking. The power trio of Coachella producers Goldenvoice and SoCal party promoters LED and FNGRS CRSSD proved they were a force to be reckoned with in the niche festival scene with CRSSD earlier this season, and this year’s third installment of Splash House brought some names while remaining true to its boutique identity. 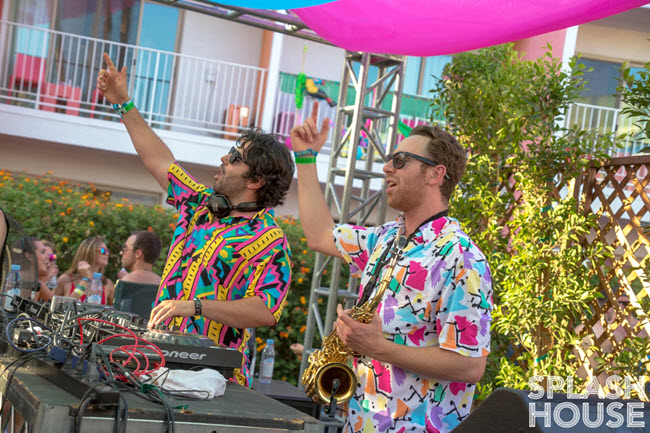 On Saturday, Viceroy brought one of the liveliest crowds to the Saguaro for his signature “summertime all the time” sound, which found me in front of the speakers jamming…and seriously wishing I had worn earplugs. I had the chance to sit down with him before his set for an interview, where I realized that many of the artists treat Splash House as a getaway to hang out with their own friends and enjoy themselves. Afterward, Amtrac closed down the Saguaro with a set that was one of the highlights of my weekend. Ever proving his versatility, he tapped into a deep, tech house vibe that had even the swimsuit-clad and barefoot shufflers working the wet pavement. Let’s just say I hope they don’t have me on video, and my feet are still paying for it, but it was the perfect sendoff to the first night.

“Splash House is my favorite festival and it’s my third time playing here. A lot of my friends come and I get to hang out with them. It’s just a really fun weekend where I can come to genuinely have a good time.” — Viceroy 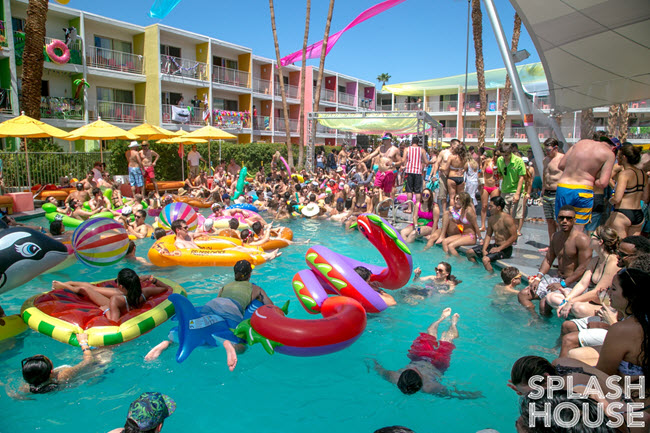 Sunday was a whirlwind that began in a panic when, upon waking, I realized that my wallet was missing. It contained the essentials to my weekend–my ID, credit cards, debit card, and a good amount of cash. Stupid, I know. I couldn’t even enter the festival for the second day without a 21+ ID. Thinking of the many venues, Ubers, restaurants and hotel rooms we had navigated the day before, my hopes were barely a burning ember when I called the Hilton to ask if they had found anything. “What’s your name?” the girl on the phone answered. I told her, fingers crossed. Without a pause she cheerily replied, “Oh, Emily, yes–we have your wallet. You can pick it up at the front desk.” I retrieved up my wallet a little damp from the pool but otherwise completely intact, every dollar and card accounted for. I can’t believe my luck; you could call it karma, but the fact that someone returned it untouched makes me believe that it was just a testament to the type of crowd at Splash House. 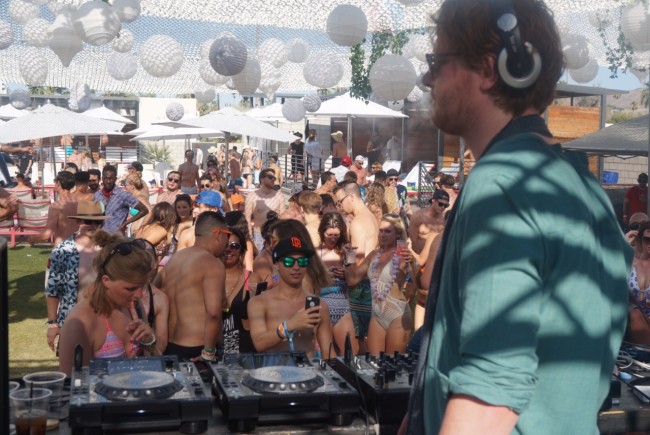 Afterward, the day flashes by in bits of lucidity, and I have to give it to French disco headliners Zimmer and Cherokee for showing us a great time. From the Dirtybird crew, Christian Martin and Worthy threw down some serious G-house and booty bass sets at the Hacienda, which were just as engaging and dance-worthy while hearing at a pool party instead of a large festival stage or in the club. Then it’s straight to having a front row (or back view, technically) seat to Bakermat‘s groovy house set.

Cashmere Cat closed out the night at the Hilton, and although his more bass-heavy sound isn’t my favorite, I have to give it to the dude to for successfully remixing The Spice Girls in his set. Later at the Saguaro, wayward Splashers in between the day and after parties gathered outside with more drinks and someone’s iPhone on the speakers, alternately dancing and lazing in hammocks. The final stop of the evening was to the “Sunday Cooldown” afterparty at a bar called Bar, where we showed up just in time to see Bakermat throw down a memorable set once more before the official end of the weekend. 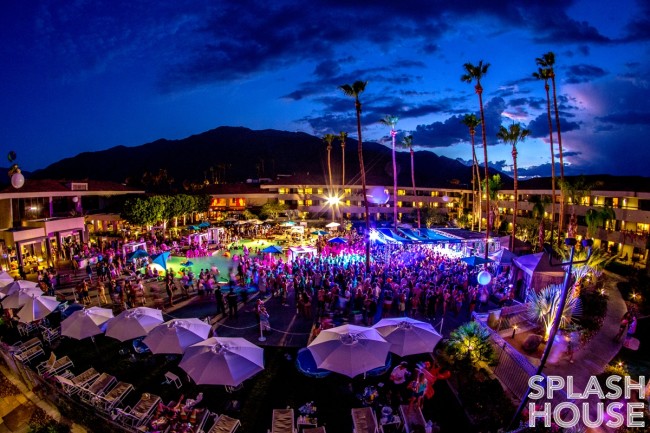 The only thing stronger than all of the strawberry jalapeno margaritas I drank this weekend is my nostalgia for it. Splash House may not be the first thing you think of when a summer music festival comes to mind, but it was one of the most awesome events I have ever attended. The organizers have mastered the perfect “hip boutique festival” atmosphere while also keeping it devoid of any douchery or pretentiousness. It’s intimate enough to feel like a big party at a friend of a friend’s house–if their house was the size of a hotel and they had a lot of DJ friends.  You’re not constantly running around seeing back-to-back headliners, so it gives you a chance to stop, discover new artists and listen to some damn good music.  Tanning in a lounge chair, getting wet’n’wild in the pool with a floatie, actually having a meaningful conversation with a stranger and mingling with your favorite DJs were all easily possible here.

If I had to describe Splash House in three words, they would without a doubt be “good vibes only.”

In case you missed the first installment, Splash House is coming back to Palm Springs August 8-9th with tickets still available here. June sold out, so get yours while you can!