Donning a Hawaiian shirt and sipping a margarita, you could say that San Francisco-based producer Viceroy is a California poster boy. Whether he’s playing tropical house and disco infused jams or remixing hip hop artists, Viceroy’s music is always feel-good and undeniably danceable.  In person, he exudes the same happy, chill vibes that has given his “summertime, all the time” brand a devoted fanbase, and he’s been bringing this motto across the country from San Diego to New York City.  We had a chance to chat with Viceroy during Splash House before he played a packed set at the Saguaro that had everyone grooving for its duration.  Here’s what we found out:

You said Splash House is your favorite festival.  Why?

A lot of my friends who are DJing come to this and I get to hang out with them.  It’s just a good experience, I love pool parties, it’s just a fun weekend.  It’s one of those festivals where I can come and just have a good time.  Besides it being 107 degrees right now, which is a little too hot.

When you’re not DJing, do you go to shows?  Who are you going to check out this weekend?

I try not to go to clubs when I’m at home and hanging out.  I don’t see too many shows when I’m off, I’m usually just trying to catch up with my buddies. It depends though, I’ll definitely go to some clubs like Audio and Mezzanine in San Francisco. There’s so much to do and see in that city. As far as this weekend, I like Pomo, he’s great.  I am excited to see Cashmere Cat’s set because I played with him a long time ago and then he blew up, but he’s doing some cool things mixing in hip hop and sounds like that into his sets.

Splash House is pretty intimate compared to large scale festivals, which provides a unique opportunity for fans to connect with their favorite artists.  Have you had a particular experience where you felt that you music particularly connected with your fans?

When I was first starting to DJ, I did a bootleg of Katy Perry’s “Friday Night.”  I was playing a couple of years ago in Costa Mesa and this couple came up to me.  They told me that he proposed to her to my rendition of that song.  So that was pretty crazy.  Also, when we recorded “Back at the Start” last December, it was doing really well so we did a remix competition.  We got about three to four hundred entries, and it was really cool to see everyone putting their own spin on our music.

What would be the ideal atmosphere for your music?

I play mostly club sets, but I am trying to figure out ways to do more unique events that are Viceroy-curated.  I want to role those out in 2016, and my idea for it is a series of pool parties.  My buddy Goldroom just did a tour of boat parties, and I threw the one in San Francisco for him.  He’s doing New York, Chicago, and Honolulu, and I would love to do a pool party version of that to get some “summertime all the time” going.  We’ll see what happens in 2016!

Speaking of your motto “Summertime all the time,” how did that come about?

I started DJing as Viceroy Feb 2011 when I was a senior in college at Trinity in Hartford, CT.  I don’t remember the exact moment it came up, really–it just kind of happened.  As far as the brand, it’s all been very organic, nothing about it has been plotted or made up.  This is just me.  Now I have to kind of control the brand, but who doesn’t like summer?  I don’t want to be friends with that person. 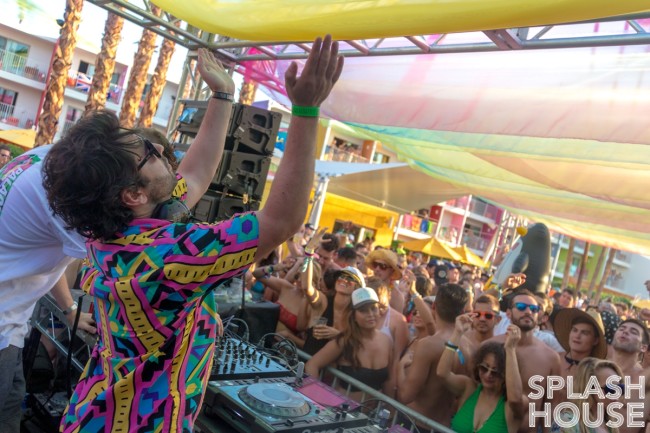 What do you think about the role of music blogs as tastemakers in this scene?

I used to read blogs all the time, I even used to write and take photos for Dancing Astronaut back in the day when it had like 5,000 fans on Facebook.  I even had a blog in college that started getting some traction. I really don’t look at them much anymore to be honest, but I think they are great for the average consumer.  There’s a lot of new music out there all the time and people need a filter for all that noise, someone to tell them what to listen to.  I think blogs are really great for artists who are in the earlier stages of their career too, you guys can make a huge difference for them.

So, about Chubbies (the swimtrunk brand).  Tell me about your involvement with them…

I stumbled upon the Chubbies brand through mutual friends and thought their stuff was awesome and really fit my vibe.  I emailed them one day and was like “Hey, I love what you guys are doing and I want to work with you,” so we set up some calls and talked about ideas.  First, they sponsored the boat party that I threw with Goldroom in San Francisco, and then we realized that there was really something more here.  Now, we’re doing a full partnership deal with them.  I designed a full line of trunks for them myself that will be coming out in July, and we do the mixtapes for them and playlists.  They’re so in line with what I do and they are great people.  When it works, it works!  We have a lot of really cool stuff coming out this summer.

0
0   0
previous [FESTIVAL/PHOTO RECAP] Why Splash House Blows Other Pool Parties Out of the Water
next [HOUSE] HENRIX vs. DIGITAL LAB - "DROP LOW"