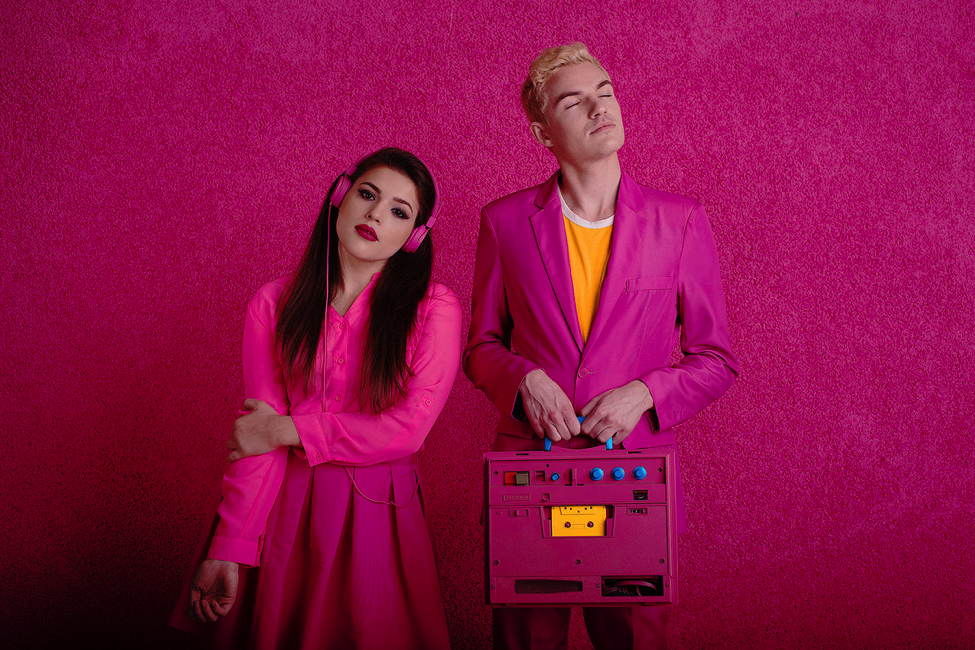 Inspired by ’80s horror iconography, bubblegum pop, and shitty exes, vverevvolf is making their mark on the world of pop music.

Hailing from the Berkeley, CA, pop duo vverevvolf is next up in the pop realm with their powerful sound and relatable lyrics. Back in 2013, Dylan Gallagher and Kelsey LaRae met in a Rock, Rhythm, and Blues Performance class at Diablo Valley College. Outside of class, Dylan mentioned to Kelsey that he had been writing a collection of singles and was interested in featuring Kelsey’s singing in his music. A few studio sessions later, vverevvolf was born. The two recently released their first full length EP, Electric Blue, which is featured on all major streaming platforms.

Dylan and Kelsey use heavy lyrics over catchy, flavorful instrumentals to depict the struggles and frustration that hateful societal norms have created. With social media shoving the accomplishments of our piers down our throats, vverevvolf vents our angst with a tasty sound that will no doubt keep the dance floor moving.

Dylan and Kelsey sat down with The Sights and Sounds to talk about their recent EP release, inspirations in the music world and experience in the industry thus far.

Sights and Sounds: Thanks for taking the time to speak with me; are you guys from the Bay Area originally?

Dylan: Yeah, we’re both from small suburbs outside of San Fran. We’re based out of Berkeley now though.

What kind of equipment/instruments do you use on stage?

Kelsey: I use a small pad sampler with preset vocals as the samples. The samples are mostly made up of Dylan screaming.

Dylan: Yeah, we’re pretty low maintenance. I have an analog synth keyboard that’s constantly falling out of tune. We also have a drummer that uses an electronic drum kit.

Tell me about Zoo Lab.

Dylan: Well, our drummer works there. We originally treated it as a rehearsal hall, but we ended up meeting a few people working there and eventually booked studio time to record Electric Blue.

Kelsey: We’re very appreciative of the staff; it’s been nothing but love since we started working over there.

Who are artists that have inspired your sound?

Dylan: We really both pull from different regions. I really like Robyn, Depeche Mode, and Lorde a lot.

Kelsey: I really like Lights and Björk. Lorde is also a favorite of mine. We’re really into modern pop/harmonious poetic stuff.

Has your sexual orientation led to any issues with booking agents/anyone working in the music industry?

Dylan: No, not really in the experiences I’ve had so far. Everyone has been cool and I feel like acceptance is starting to be more ingrained in the community. Plus, people can’t ignore the massive contributions that the gay community has made to the world of music.

So, it was significantly worse while growing up?

Dylan: It was really deliberating at times. I really caught the tail end of the normalized discrimination. There were just entire things going missed by the administration at the schools I attended. It was really tough, but it made me have thicker skin. While it sucked at the time, it made me stronger and kind of shaped me into the person I am today and the music I make.

Tell me a little bit about “Lemonade”

Kelsey: It’s a song about being angry. When we perform the song, it’s important to be in that right state of mind to express the meaning of it. I pull from my feelings of self-hatred and feelings of dealing with my self image to get into the zone.

Can you explain the symbolism used in Lemonade?

Kelsey: Yeah, in pop music things are always so positive. People always think of lemonade as making the most out a situation. We wanted to break the mold and show that pop songs can be just about being angry. If you listen to the song, you’ll hear that sometimes we don’t want to make lemonade with life’s lemons. Sometime situations/aspects of life can just be purely negative, and that’s ok.

Dylan: Yeah, when I writing it I was pissed. But now I think it’s a fun song to perform, so it’s kinda weird how something that originated as being purely negative is now something that I enjoy. Definitely strange how things can come around full circle.

Talk to me a little bit about “Cruel Games.” What are you giving a shot?

Kelsey: The song itself is about watching the people around you experiencing happiness as well as finding your own route. People’s lives are so broadcasted these days with social media, and people only want to share the things that make them look a certain way. Especially with people our age, there is such a huge range of life experiences that people are going through; the song is just kinda about seeing all of that and finding your own way to find happiness.

Do you guys have any touring/shows coming up to accompany the new music?

Dylan: Not yet, we’re pointedly avoiding playing to allow the new music to marinate.

Thank you guys so much for your time!

Dylan and Kelsey: No problem!

Purchase Electric Blue via Amazon or iTunes below: