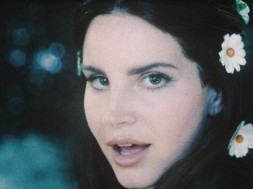 The Earth can be a strange place sometimes.

Regardless of where you call home, there are likely times you want to just get away from it all.

Luckily, that’s exactly what Lana Del Rey is giving her audience in the latest visuals for this weekend’s surprise new single “Love”.

In the Rich Lee-directed piece, the video begins with what seems the most likely of places: upon a stage. But as the singer begins to sing, hair done up with daisies, giving off that classic vintage vibe, she’s juxtaposed to reels of couples “young and in love”.

The video takes a more visually interesting and dreamy, cosmic twist as the lovers begin to float in space while the singer performs on a lunar landscape.

“Love” is Del Rey’s first single from her recently confirmed and still as-of-yet-untitled fifth studio album. Fans can expect the album sometime later this year, although it’s exact release date, track list, and list of collaborators still remain a mystery. While the singer has long relied on the Earth’s landscapes to tell a story in her videos, it will be interesting to see where she takes her newest project.

“I made my first 4 albums for me, but this one is for my fans and about where I hope we are all headed,” Del Rey recently told Rolling Stone.

We can’t wait to see where this cosmic journey is headed.

It looks like we may be going to the moon.

Catch Lana before she leaves the Earth’s atmosphere again at her array of Summer European festivals including: Lollapalooza Paris, Helsinki’s Flow Festival, Oslo’s Oya Festival, and Way Out West Festival in Göteborg, Sweden.