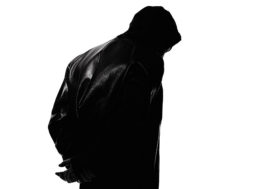 Sound Bites is a recurring segment where we meet with some of the best food vendors in the scene, digging in to discover their connection with music and it’s surrounding culture.

Since the day I realized I wasn’t 19 anymore and can’t party off of beer and mint gum alone, food has become a pretty big part of my festival agenda. While I’ve had my fair share of overpriced pizza and half-assed fries in the past, food culture at live music events is finally growing out of it’s “they’ll eat anything” mentality into a well thought-out display of what local vendors have to offer. It’s evolved to the point where I can take two steps from a mosh pit and stumble into a sushiritto stand. What a time to be alive.

The Food Lineup at All Things Go Fall Classic this year was obviously a product of this change. Conveniently located next to DC’s overpriced-yet-worth-it food court, Union Market, All Things Go showcased a great array of options that paralleled it’s diverse musical lineup (featuring artists like The Knocks, Vince Staples, and Foster the People). To find out more about the folks behind the stands, we visited Milk Cult, Takorean, and Buredo to talk music, annoying food trends, and mustard & pickle ice cream sandwiches. 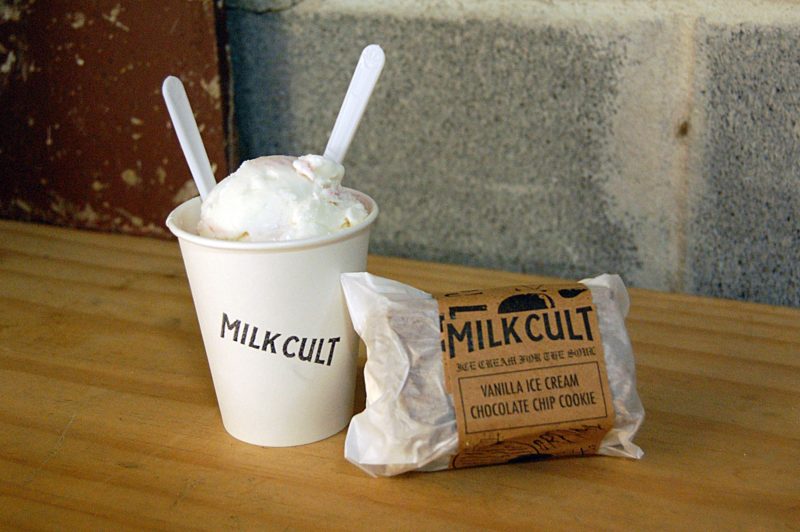 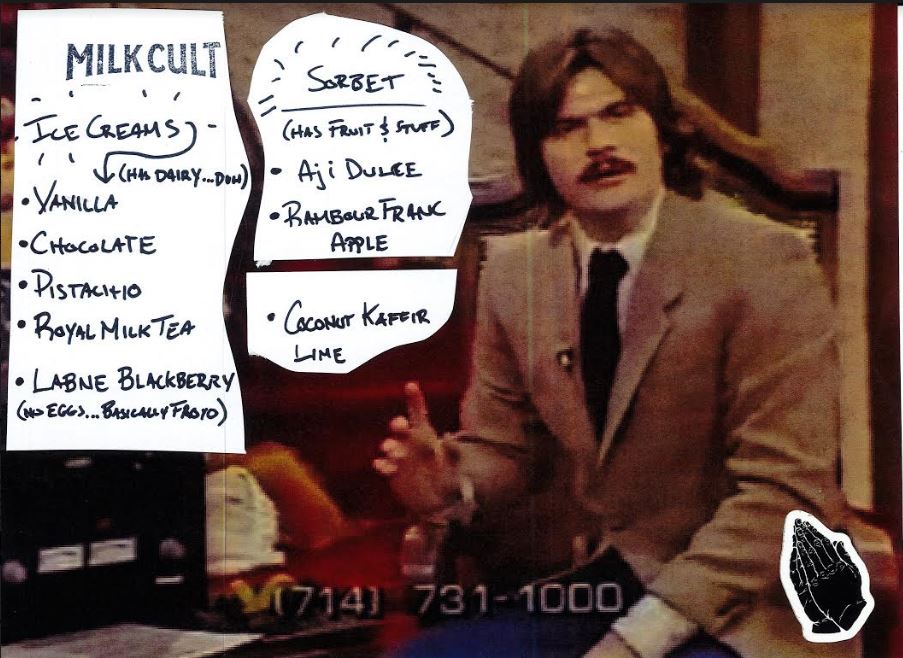 We listen to a lot of different music, a lot of hip-hop, metal, I’ve been a really big fan of Chances With Wolves for a long time.

Most of the best ice cream out there is still very traditional.  A lot of times when you see someone who isn’t doing really good versions of traditional ice cream (or food in general) it’s because they can’t.  A lot of people and myself included will still just want great Vanilla or Pistachio ice cream, so we’re just trying to make that, do some other things we think are awesome and have fun meanwhile.

I really liked the mustard pickle ice cream sandwich. Which I was kind of surprised by, because I thought it was going to be gross. But for some reason the mustard-pickle- sour-sweetness really worked.  I don’t think it’s the kind of thing someone who’s really high would enjoy, but maybe someone who’s really broke would. So I’m going to say Ana De Silva (the Raincoats) maybe (though she’s probably not hard up anymore). 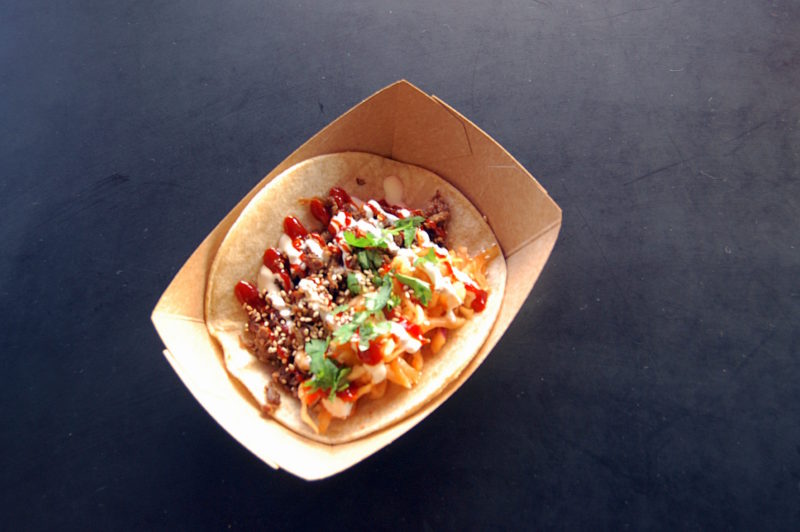 We’re doing our bowls this year. They’ve become a very popular item for us, more so than the tacos. Half brown rice, half kale. It’s a spiced kale slaw with gochugaru and pepper flakes and you can add pork, chicken, or tofu.

I’ve been to Bonnaroo, I’ve been to a lot of the hippy, jam band type stuff. I’ve been to this festival as both an employee and an employee. Festival food can be very simplistic. Folks like All Things Go and similar events have almost co-branded festivals to be a music and food festival, instead of just a music festival with whatever food. And it think that’s pretty important. Even at some of these big festivals like Bonnaroo, you’ll get some bad food but there’s always some interesting stuff too.

It’s a hard one because there’s some that I like but I don’t like whats become of it.  I guess I would say poke. I love Poke. I have roots in Hawaii my partner was born and raised in Maui and her family lives there, we go there often.

Poke is not a rice bowl. Poke is served in a quart container at a supermarket and you go and you eat it straight out of the quart container at a beach. It’s not a meal, It’s not covered in mayo sauce and all this other stuff. It is kind of what is is. It’s interesting, a lot of the new poke concepts are owned by former froyo owners, so you know it’s a trend.

Grilled cheese, always. If I have it, I make it with american cheese. Sometimes I”ll mix American with some cheddar but the thing about american is that it’s all about the texture. It’s this creamy, gelatinous, beautiful texture that you can’t get from any other cheese. And if you get really good high quality American Cheese it’s not that bad either. It’s just like, milk solids, gelatin, and milk. And it melts differently than any other cheese. But also if you have  slice of in season tomato that sets it off. But out of season tomato, not worth it. 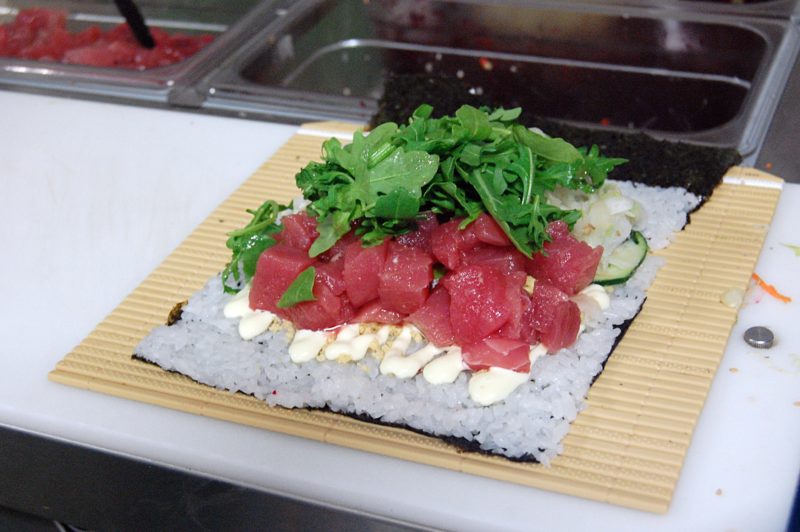 So we have three different kinds of burritos today. The first one is the raw tuna roll, the second one is the cooked shrimp tempura roll, and the third one is a vegan roll which as tofu in it. They’re called Hanzo, Sofie, and Pretty Riki (respectively).  These are named after characters from Kill Bill.

We have served at festivals before. Sometimes the customization can be a little bothersome but we don’t think it’s a big deal. It’s our job to do what they want so we’re not annoyed by it.

Bruno Mars! He’s from Hawaii, and he’s half Philippino so we know he’ll love our sushi rolls. I just went to his concert a few days ago. We always like to play his music when we work at the store, all of us sing and dance a long.

Personally, I would say Chinese food is not that authentic at all. I love Chinese food as it is, but the food that’s served in the restaurants are super Americanized. Like orange chicken it’s way too sweet and saucy. It tastes good, but there’s no authenticity in the food.