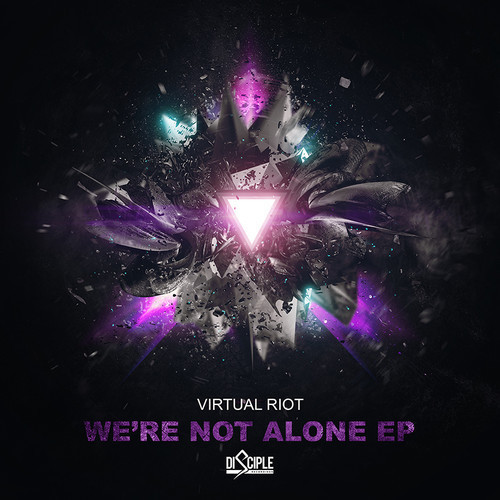 Don’t look now, but Virtual Riot just unveiled the dubstep song of the year. Yeah, I said it, and guess what? I won’t hesitate to repeat it. Virtual Riot, one of my favorite producers on the planet, just put out 2014’s most captivating dubstep anthem. Do I need to say it again? No? Okay, good. Granted, we may have a few months left on the calendar for other top tune competitors to emerge – I’ll always be more than happy to stick my neck out for this German genius’ bass music brilliance. Disciple Recordings did us the pleasure of releasing his dancefloor-dominating We’re Not Alone EP last week and the all-powerful title track has completely awaken a once dormant dubstep scene.

Lets take it from the top. Virtual Riot kicks things off with a with the wildly ludicrous synth work of “Synthony.” From start to finish, this Jonas Minor collab tastes more tantalizing than a finely aged wine. Picking up precisely where “Synthony” left off, the glitch hop body-shaker better known as “You Know Me” has you reaching so high that you’re literally pulling down clouds out of the sky. If this flawless track doesn’t make you want to get up and move, I’m not quite sure what will.  Speaking of flawless tracks, we’re almost at the most flawless of them all. But not quite yet my friends, because first we’re administered a full dose of “Getting Real (Tired Of Your Shit).” This electro house brain-melter carves up the inside of your skull with some of the roughest bass on this entire EP.

Okay, here we go, it’s the moment that we’ve all be waiting for (or as least the moment I’ve been waiting for), the wonderful, the stupendous, the marvelously mystifying “We’re Not Alone.” For the last week, I’ve found myself playing this song an average of 5-10 times a day. In fact, I think I’ve played it 5 or 6 times alone while I’ve been busy writing up this post. So do you get the picture? I love this freaking song! But why Barrett? What’s so cool about it? Ummmm, the question you should all be asking is, “what’s not cool about it?” Seriously, if I must elaborate, lets start with the perfect vocal placement, it’s unreal. Moving on to the catchiest melodies that I’ve heard this side of the Equator, they’re downright extraordinary. And finally, but most importantly, the inordinate amount of heavy bass that makes dubstep tracks like this one an instant classic (in my eyes). I could continue gushing over this tune for hours on end, but it’s probably better if I wrap things up.

To close out the EP, we’re treated to a gigantic remix from Au5 (one of my favorite producers). While it might not be the dubstep masterpiece I was initially dreaming up, his tranced-out revival of “We’re Not Alone” still makes me want to dance the day away. Bottom line, this musician has a habit for hammering out heavenly bass tunes, regardless of the genre. Whenever I’m packing for a trip to paradise, Au5 is an absolute essential. I don’t often tell people to run out and purchase music, but do yourself a huge favor and go buy Virtual Riot’s latest work of art on Beatport. With the proper funding moving forward, the possibilities are clearly limitless for Virtual Riot.