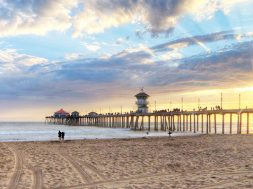 KROQ, Travis Barker and John Feldmann have come together to announce Back To The Beach Festival.

A new weekend destination festival featuring some of the biggest names in modern ska, punk and reggae.

Debuting April 28 – 29 on the sands of the world famous Huntington State Beach in Southern California, Back To The Beach festival is set to make my inner high school child explode.

Back To The Beach will feature performances from 311, Sublime With Rome, The Mighty Mighty Bosstones, Goldfinger (featuring Travis Barker), Fishbone (original lineup), The Aquabats, Less Than Jake and many more performing on the shore of the Pacific Ocean in picturesque Orange County, California. As if that weren’t enough, there will also be special surprises announced leading up to the festival.

John “Feldy” Feldmann of Goldfinger, co-producer of Back To The Beach, explains, “The inception of the idea of a ska festival turned into reality from one festival (Punk In Drublic) to another! I grew up on ska, so this has been my dream! Now I get to do it with one of my best friends, Travis Barker. 2 OG rude boys getting back to our roots!”

Back To The Beach will feature a carnival midway, beach games, the Lil’ Punk Kid Zone, vegan food, craft beer and cocktails, and more.

Tickets are on sale now the Back To The Beach official website. A limited number of VIP ticket package options are available (see below for details). For this family friendly event, kids under 10 get in free when accompanied by an adult with paid admission. This is an all-ages event.

The current daily band lineup for Back To The Beach is as follows:

Full Back To The Beach Lineup: 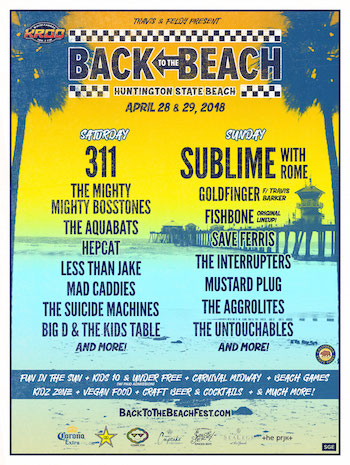