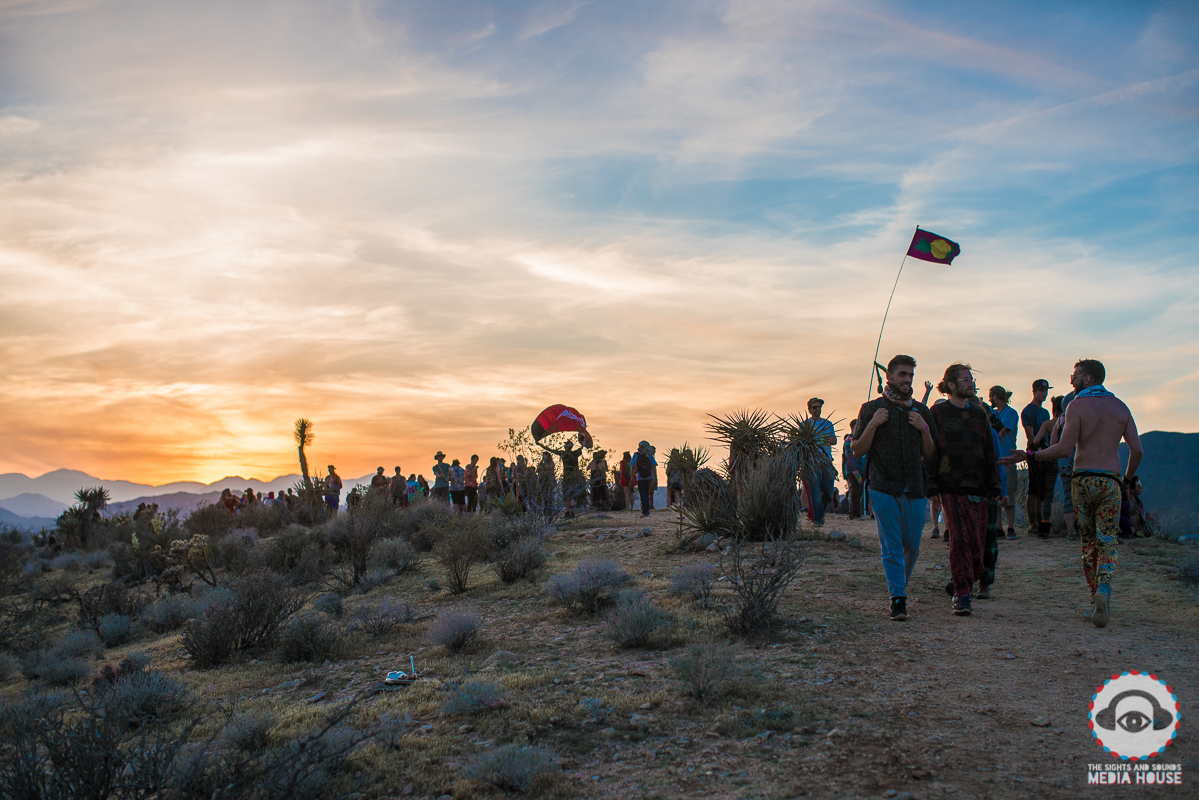 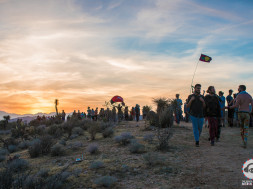 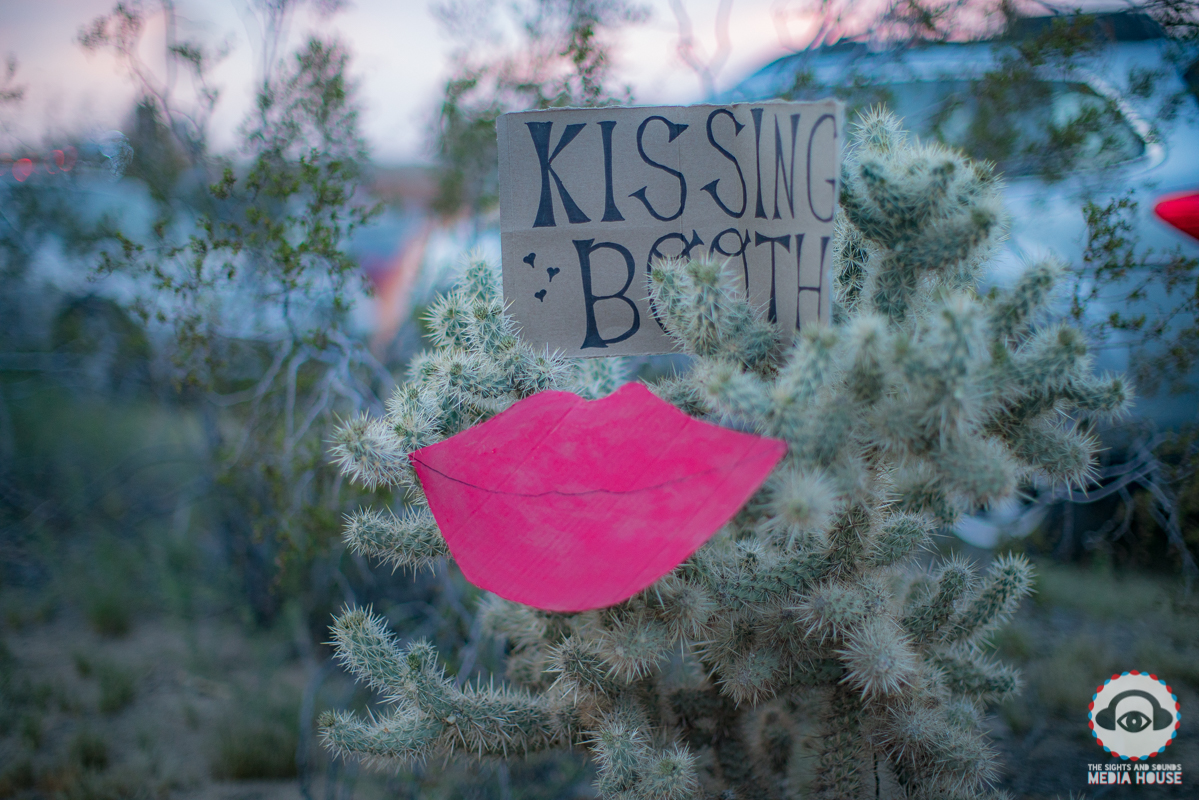 Tucked away on a small patch of dust-swept thorns and sandy footprints of forgotten rivers, Serenity Gathering 2016 stood boldly in the desert of Joshua Tree, arms open in welcoming the Spring equinox with a weekend of music, art, and community.

As my gas needle teeters on empty and the gnarled Joshua Trees slip into my rearview, the memories of the weekend play back on the reels of my mind. For many, Serenity Gathering marked the return of festival season and a chance to dust off the desert furs only to gather more of the gritty stuff. Although touted as a music festival, the event felt more like a gathering of old friends back together after a long winter, a community built around the cold desert moon and accompanying deep soundtrack. And despite the technical difficulties plaguing stages throughout the weekend, festival goers seemed content in their revelry of simply being alive in the desert at that moment in time.

'Fest goers lived in the revelry of simply being alive in the desert at that moment in time.'Click To Tweet

Check out our full photo gallery of the weekend below:

The weekend was marked by exceptionally good weather and the general atmosphere of everyone walking around was love and smiles. The crowds came with good vibes and the highlight of any good festival are the people you interact and create experiences with. The memories created with the people at Serenity Gathering this year will be the fuel that drives the rest of my 2016 festival experience.

'The memories created at Serenity Gathering will fuel the rest of my 2016 festival experience.'Click To Tweet 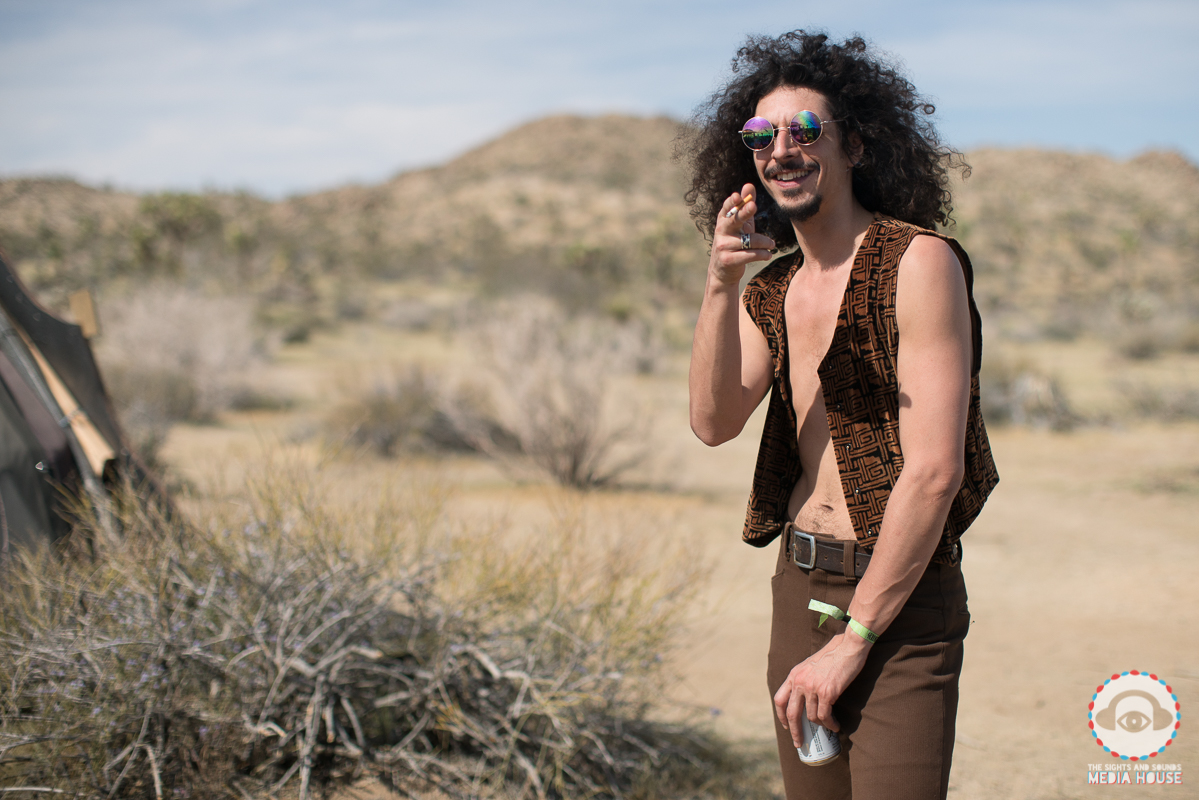 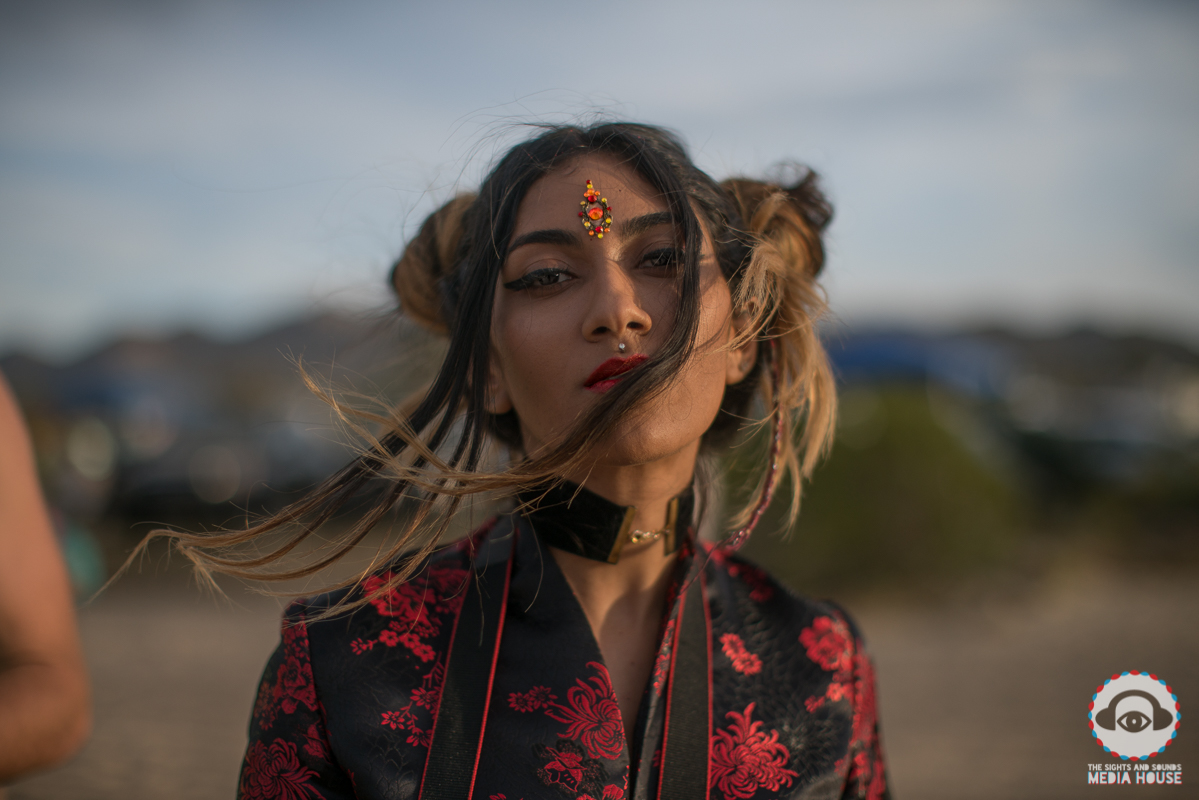 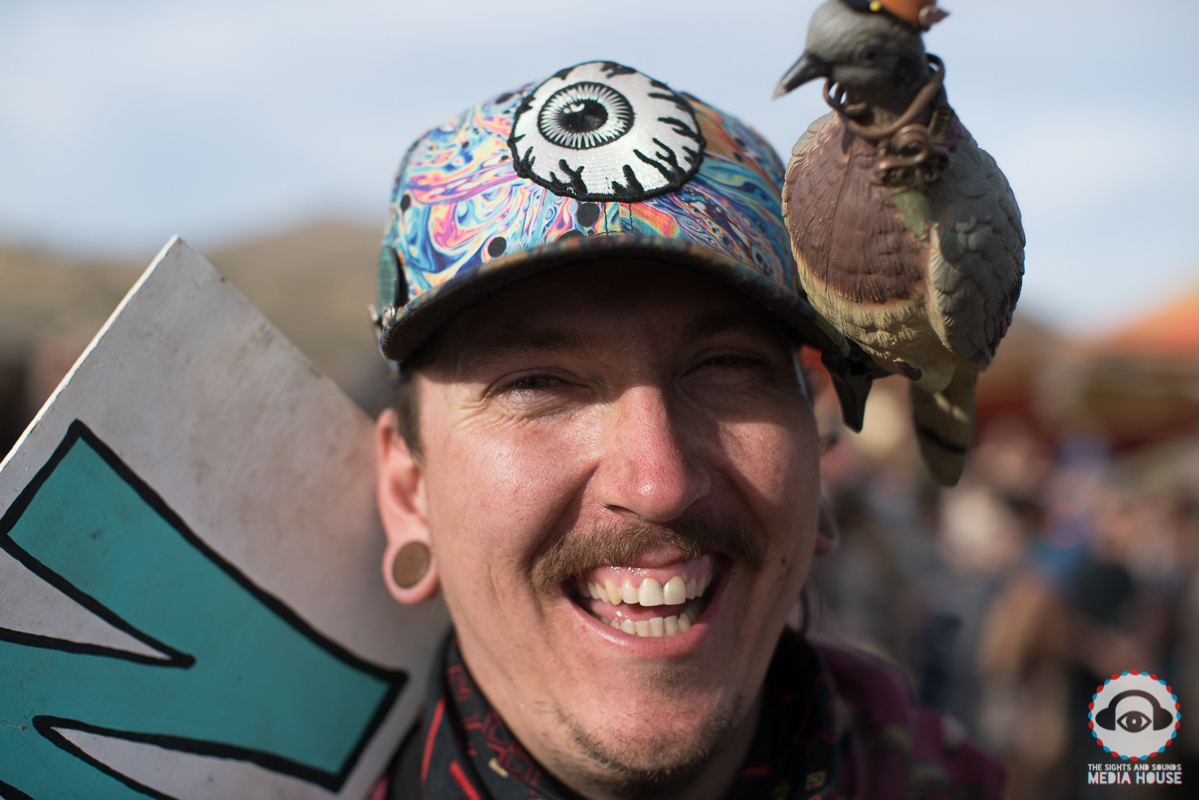 No matter how great the people at events like this are, however, technology always shows up to bring us back to the reality of the world we live in. Despite, I’m sure, the valiant efforts of the men and women in the sound booth, the main stage ran behind schedule all weekend – 3-hours at points on Sunday night – forcing Random Rab to forego his closing set and play a shortened set on a side stage later that night. The hour-long breaks between sets didn’t help the weary desert tribe, either.

A lot has to be said for putting on an event like Serenity Gathering in the middle of the desert, and despite a last minute location change a month before the event (a nightmare for all producers), the crew pulled it off with sweat on their brows and smiles on their faces. Unfortunately, the location change also placed them in conflict with a local Shaman retreat, so if you were wondering why the noise at night was so low, that’s your answer. 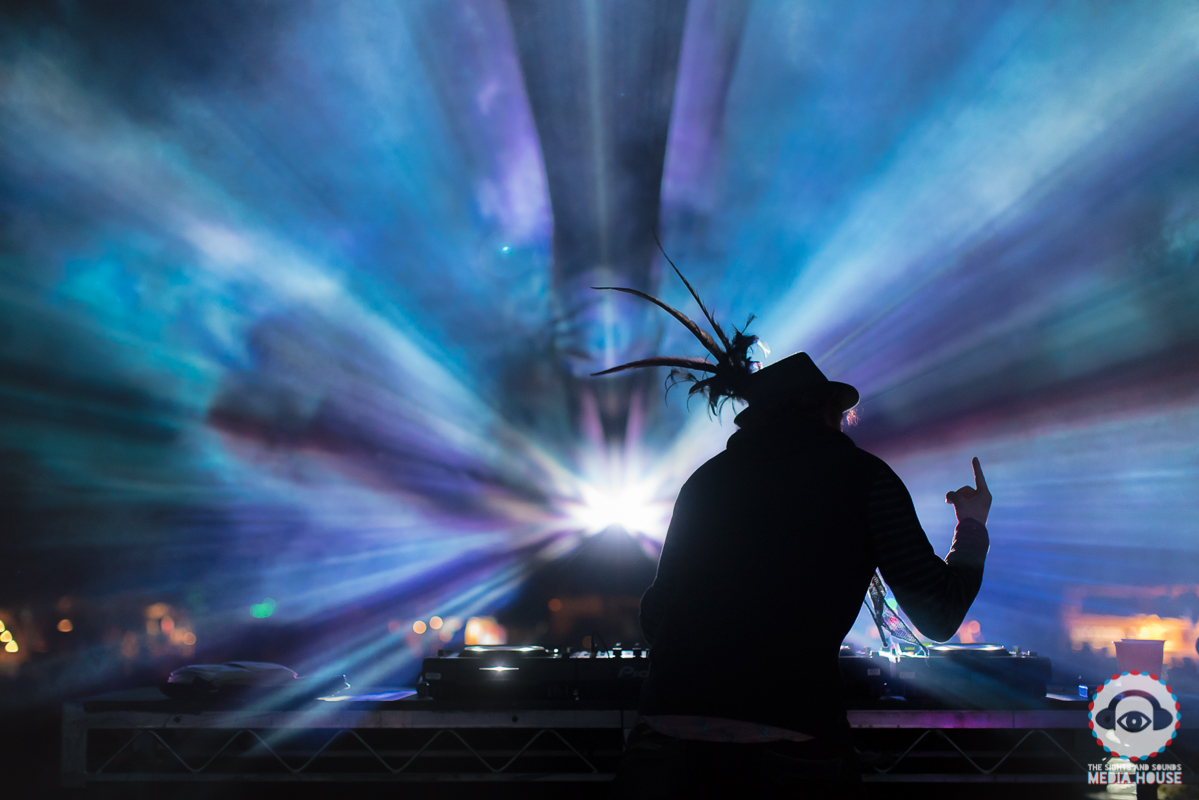 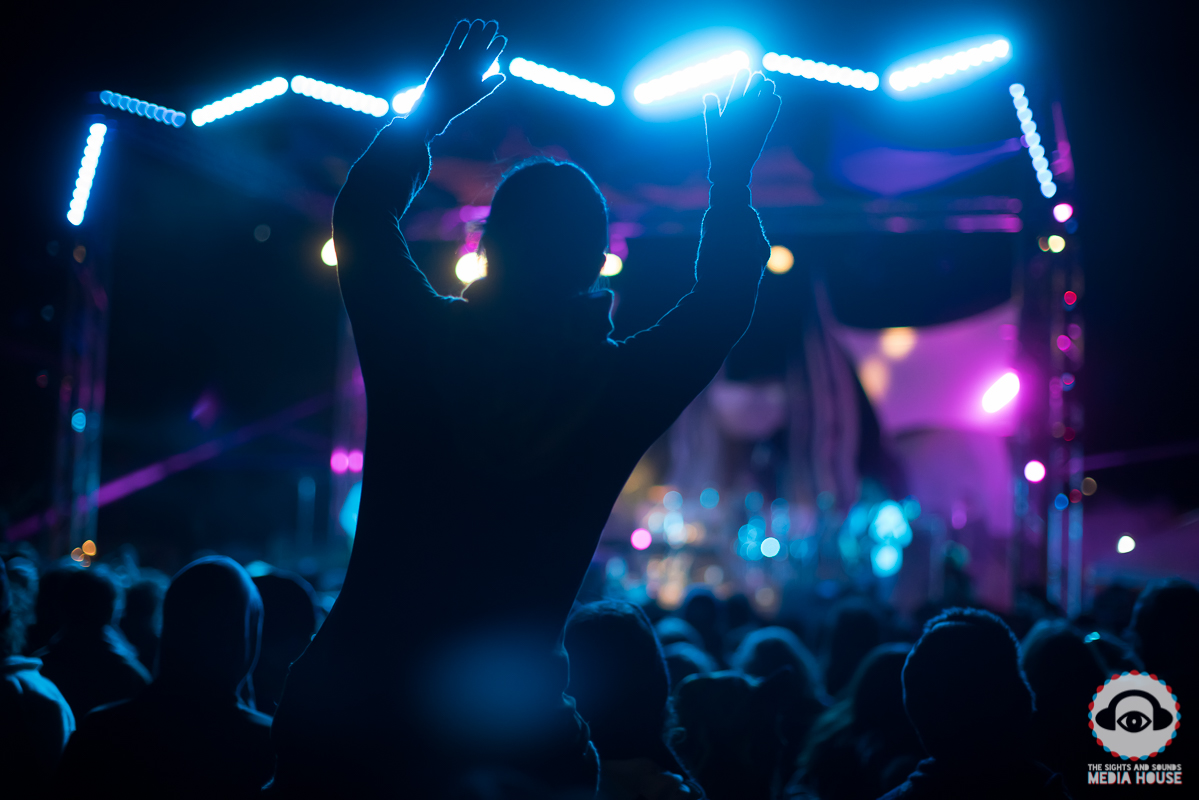 Unlike a lot of festivals, I came into Serenity Gathering not knowing a lot of the bands and hadn’t seen many of the ones I did know perform live. I was excited to expand my live music experiences and check out some new sounds along the way. The headliners and ‘large font’ groups were all standout, with shout outs to Phutureprimitive, Shpongle, Govinda, Del The Funky Homosapien, Emancipator, and Nahko And Medicine For The People, who had arguably my favorite live band set of the weekend.

Bands I stumbled across that you need to check out now:

The super funk and soul of Soul Scratch (who have a new album dropping soon). Lafa Taylor, whose late night party woke me the fuck up and got the desert shaking again. Making a funk resurgence at Serenity, the Pimps Of Joytime played to a a beautiful colored sunset. And finally, Dela Moontribe, whose Sunday bass-heavy desert rave was the stuff I dream about.

Finally, it is with heavy heart that I write that the weekend welcoming in the Spring was not without the community saying goodbye to one of it’s own. Nick Alvarado, better known as the party starting beatmaker Pumpkin played his final set at Serenity Gathering Sunday night. Tragically, he lost his life in a car accident on his way to another music festival. Due to the noise restrictions, his set had to be turned down quite low.

I remember thinking and hearing from others what a shite deal it was. Looking back, it was the perfect atmosphere for a final bow – the music setting a tone for the community to come and be together in the desert, not overbearing or obnoxious, just there, like us, enjoying the company of good people, good music, and good vibes.

Read our tribute to Pumpkin here. 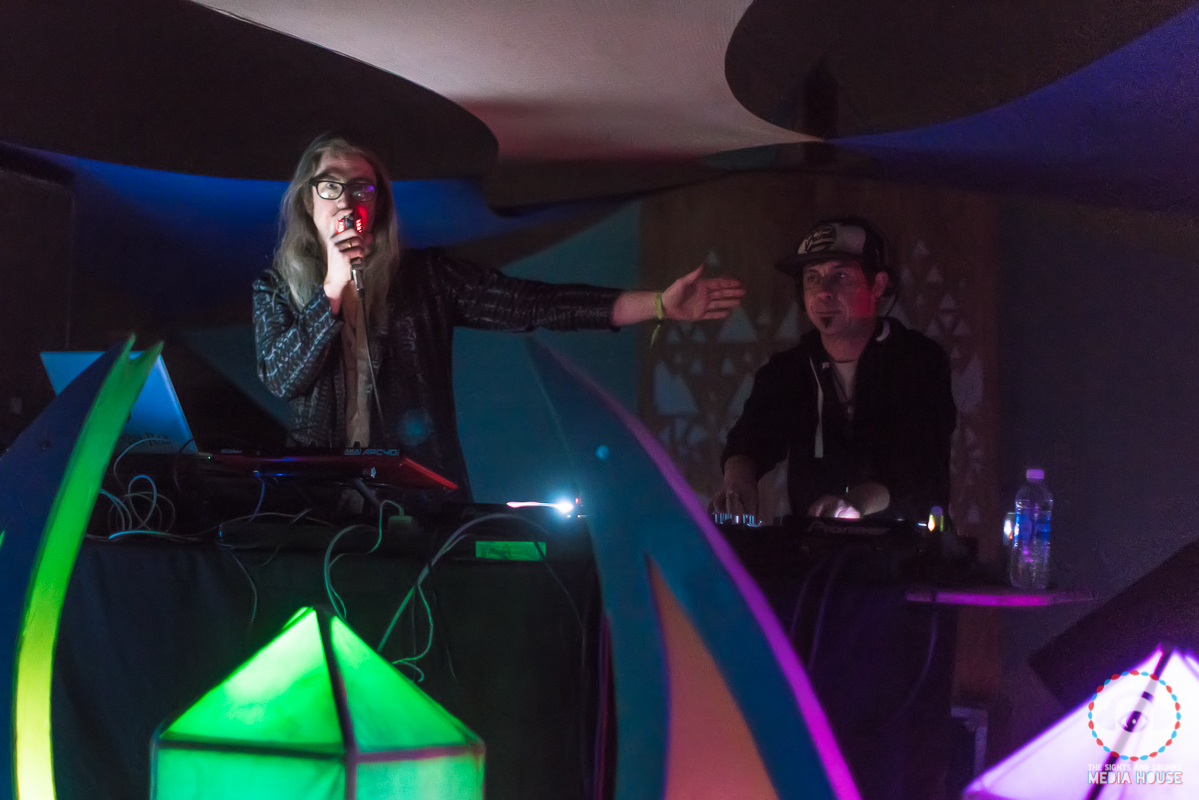