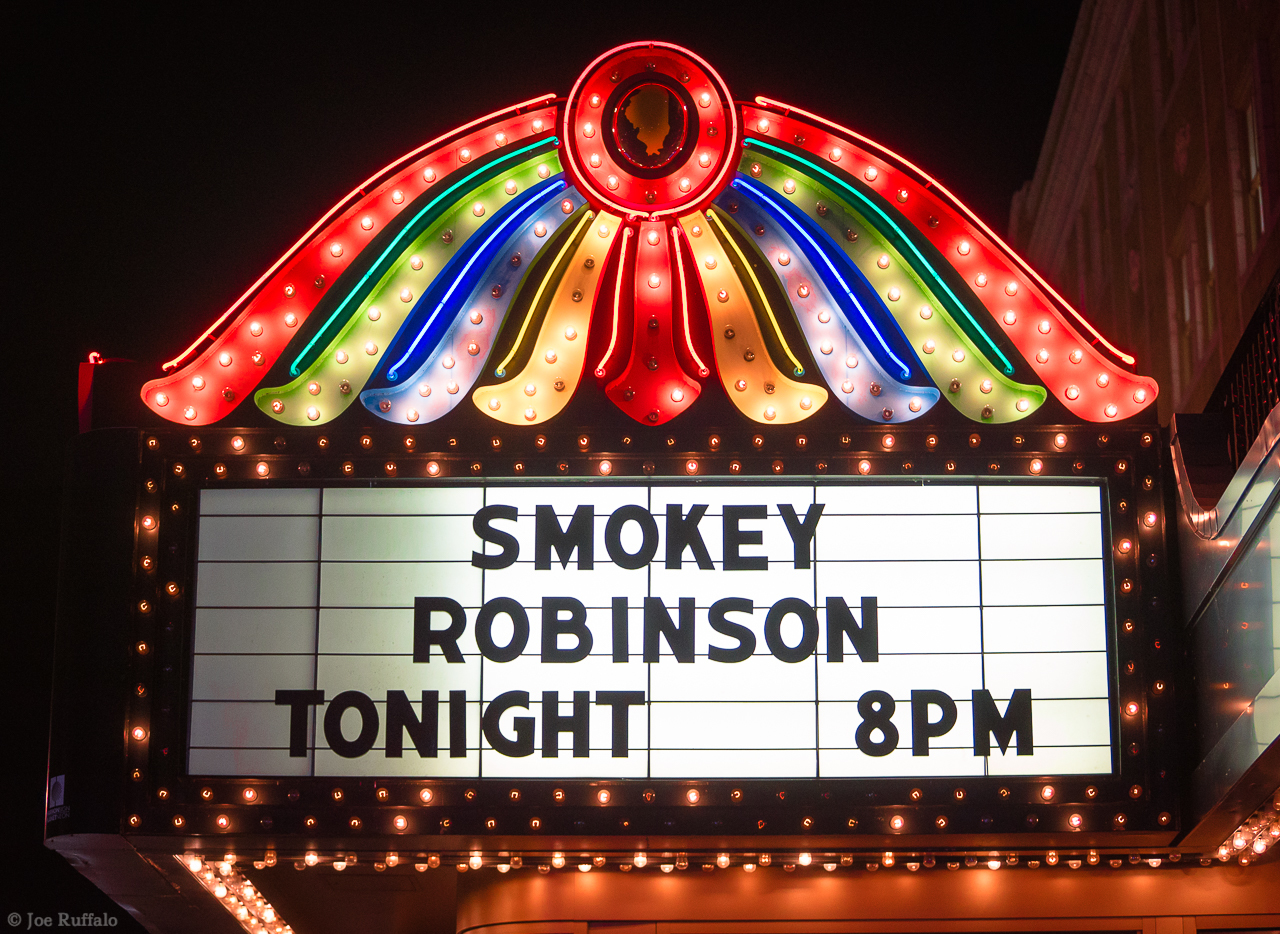 The term ‘legend’ is often thrown around anytime one’s contributions or achievements are applauded.

Some may even argue that it’s used a bit loosely. When your accolades include being a Kennedy Center Honoree, writing 37 top 40 hits, and co-founding one of the most prolific record labels in music history, this debate can only go so far. Once regarded by Bob Dylan as America’s greatest living poet, Smokey Robinson has seemingly done it all. Despite an already admirable resume of contributions to both entertainment and culture, the 78-year-old still (thankfully) wants his voice to be heard.

On October 26th, Smokey Robinson returned to the Genesee Theatre in Waukegan for the first time in four years.

Walking down Genesee Street, I soon found myself mesmerized by the faint glimmer of the venue’s iconic marquee in the distance. Upon admission, hospitable staff and an abundance of ornate detail worked in tandem to generate a palpable ambience, surpassing all expectation held prematurely for the 90-year-old theatre. The historic venue’s prideful displays of both class and charm quickly set the tone for what would be an unforgettable evening.

The building’s many hallways, lounges, and foyers became vacant as the time swiftly approached 8 pm.

Soon after, a 9-piece band emerged, followed by the man himself. Sporting a blue silk suit and a smile stretching from cheek to cheek, Smokey Robinson took the stage, receiving a gracious welcome from the passionate audience. After opening with the 1981 love ballad, “Being With You“, Smokey turned the clock back even further to his days as lead vocalist of the Detroit-based quintet, The Miracles. It was during this period that Robinson experienced prolific commercial success, helping put Motown on the map with founder, Berry Gordy. Noteworthy renditions of super-hits such as 1967’s “I Second That Emotion” and 1963’s “You Really Got A Hold On Me” both proved to be defining highlights of the evening for fans, including myself.

In between songs, Robinson took a brief moment to pay homage to a beloved friend.

“This show is dedicated to my baby, Aretha Franklin“, the singer shared before the crowd. The Queen of Soul, who passed away in August at the age of 76, had been Robinson’s “longest friend.” Inseparable since childhood, the entertainer had previously given a touching eulogy at Franklin’s funeral; understandably so, the wounds were still open. Smokey followed by drifting into a rendition of 1965’s “Ooo Baby Baby.” The crowd watched intently as the vulnerable singer displayed his true dynamic range, hitting note after note with fragile precision. It became evident in this moment that Robinson was no longer singing to his audience, but rather, speaking directly to Aretha. Knowing this triggered goosebumps (and tears for many) which lasted up until the song’s conclusion. By that point, the entire venue stood speechless, giving Robinson the longest and loudest applause of the night.

“Well, I guess that’s it”, the singer joked, instantly lightening the mood within the building.

Following the rendition, Smokey took a brief moment to reminisce over the greatness of Motown. The monologue segued into the glory days when music fanatics could pay to watch artists like Marvin Gaye, Stevie Wonder, The Four Tops, and The Temptations perform all in one night under the same bill. Believe it or not, Robinson was even responsible for writing some of The Temps’ biggest hits, such as “The Way You Do The Things You Do“, “Get Ready“, and “My Girl” (All three songs were performed Friday night in the form of a medley).

Frequently interacting with the crowd through storytelling and playful banter, the entertainer seemingly defied age.

With the show creeping closer towards its conclusion, the band’s guitarist teased the opening licks to the ballad that many eager fans had waited all night to hear. Soon after, the rest of the group followed and launched into the 1965 hit single, “The Tracks Of My Tears” (The significance and reception of this track also led to its preservation into the National Recording Registry by the United States Library of Congress in 2008). Accompanied by pristine backing vocalists, Robinson’s performance of this legendary song worked to captivate an already satisfied crowd. The song was followed by an elongated version of 1979’s “Cruisin“, in which the singer called up two lucky members from the crowd to join him on stage; one of which had traveled all the way from Australia to see the performance. After incorporating additional crowd participation into the show’s finale, an appreciative audience stood on their feet in awe as Smokey left the stage.

The celebrated showman has worked tirelessly the past six decades, successfully carving and cementing the path to an eternal legacy.

While I may have been one of the youngest members in the crowd on Friday night, I have had a long lasting connection with Smokey’s work. At 5 years old, I can clearly remember hearing the singer for the very first time, as legendary radio disc jockey Dick Biondi played the 1970 hit ,”The Tears of a Clown” on a former Chicago radio station known as Oldies 104.3. Being exposed to this music at such an early age laid a foundation that I remain truly grateful for to this day. In a bittersweet night filled with nostalgia, seeing Smokey Robinson perform 20 years later only further reinforced his greatness. 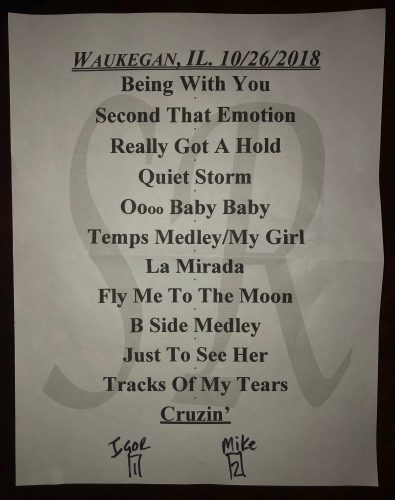