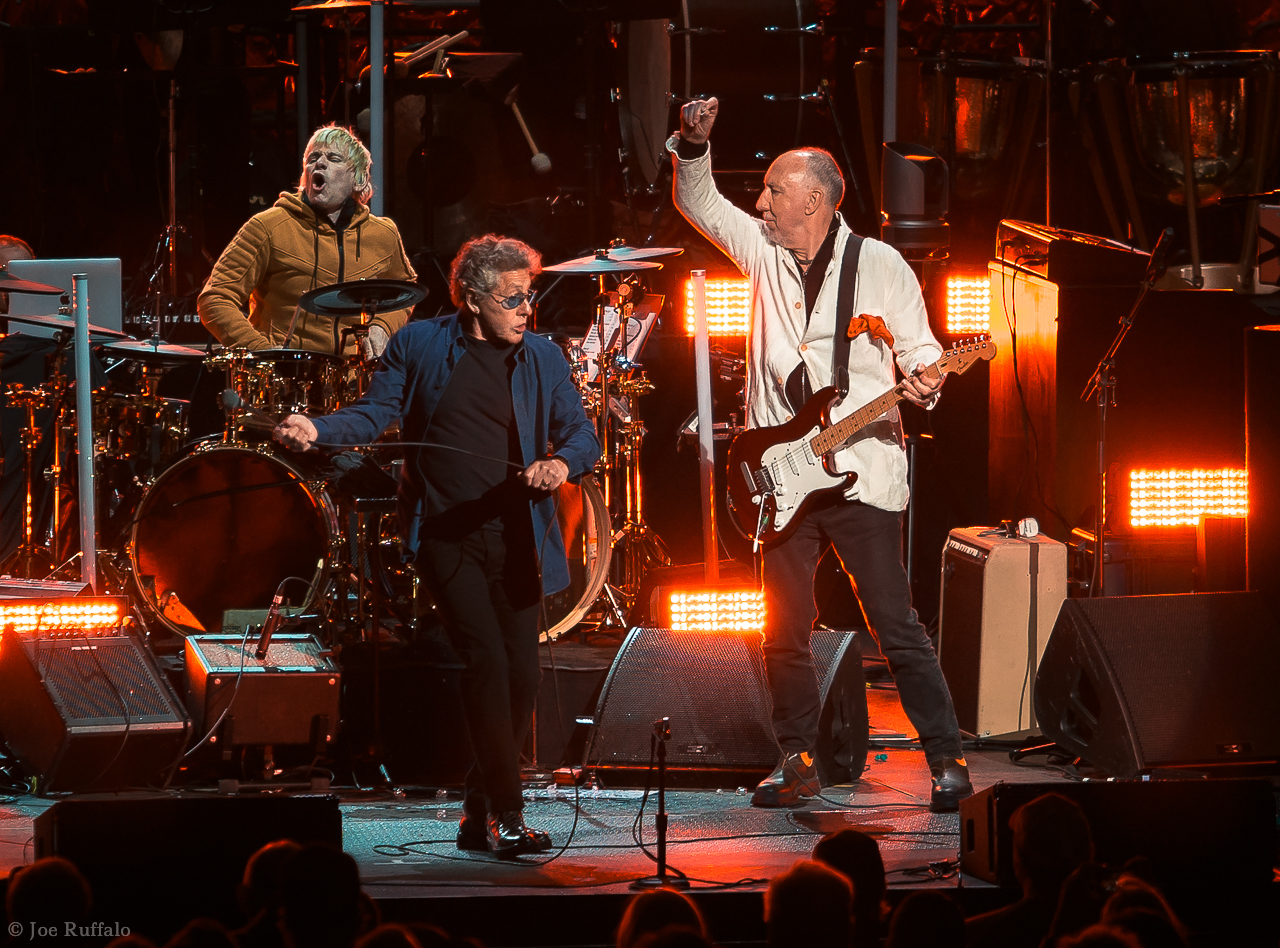 By now, you’ve likely noticed a similar trend within most of my recent write-ups: a heavy emphasis on weather. For those who have (wisely) kept their distance from the Midwest, I can promise that it’s far from an exaggeration.

Given the unpleasant conditions during The Who’s May 21st outdoor performance at Hollywood Casino Amphitheater, it was one of the first topics that frontman, Roger Daltrey, chose to address. “How do you live here!? Hasn’t anyone told you? It’s f%#*ing May! Almost Summer!”, the singer half-jokingly asked the crowd as he zipped up his jacket. While guitarist Pete Townshend joined in on Daltrey’s comedic banter, he ultimately held optimism. “I hope we can warm it up a bit for you”, the founding member told the crowd shortly after walking on stage. If there’s anything the two rockers have taken from over six decades in music, it’s that through both triumph and tragedy, the show must always move on.

Thousands of fans in attendance had every reason to surrender to the cold and retreat back to their homes – but they stayed by choice. Frankly, at the peak of the performance, it seemed as though all connection to the outside world was lost. A brilliant 52-piece symphony orchestra helped navigate a set which primarily favored the group’s two massive rock operas, Tommy and Quadrophenia. Daltrey’s ability and willingness to attack other hit songs in their original key (including “The Seeker“, “Behind Blue Eyes“, and acoustic rendition of “Won’t Get Fooled Again“) proved to be equally as impressive. As expected, the singer could often be seen whipping his microphone across the stage, while Townshend repeatedly punished his guitar with vicious windmills. Former Oasis drummer (and son of Ringo) Zak Starkey and bassist Jon Button capitalized on every opportunity to showcase their talent, while adding creative flair to countless classics performed throughout the evening.

Although choosing a favorite is a daunting task, the most memorable moment of the night (for me, at least) occurred toward its end. As the group triumphantly launched into their rendition of “The Rock“, the entire stage radiated, with every component operating at full strength and precision. As the lights went dim, thunder from incoming rain could be faintly heard in the distance. Mother Nature would appropriately set the scene for pianist Loren Gold’s delicate and haunting introduction to “Love Reign O’er Me.” The band would inch closer to the chorus, like a lit fuse on a stick of dynamite. At the end would be a vocal eruption, as Daltrey’s blood curdling screams were enough to shake the ground beneath him. Instantaneously, I was hit with chills – however this time, it most certainly wasn’t from the weather.

While Daltrey and Townshend may both be in the later stages of their tumultuous career, I can assure you that this current venture is far from half-baked. Given their past commercial success, it’s not about a paycheck, either. It’s about camaraderie, and a continual desire to explore the unknown. With their first studio album in 13 years on the way, it’s clear that the duo is already focused on what lies ahead. As for the present, the “Moving On!” tour is something special; a testament to the true creative brilliance of undeniably one of the greatest bands to ever grace the Earth.

Tickets for The Who’s current tour throughout North America can be purchased here.