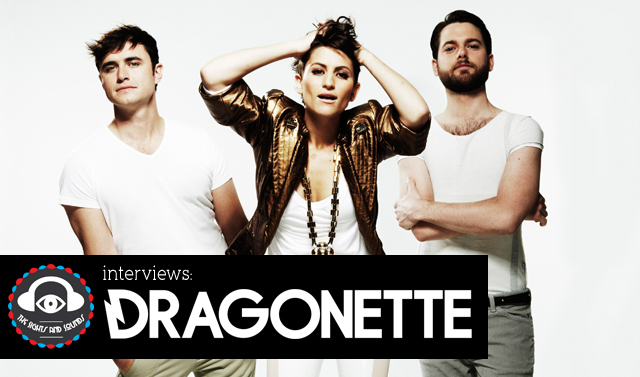 Canadian pop trio Dragonette are a lot of things. Anyone who has spent some time with the group can attest that they are extremely talented, super nice and genuinely humble, and they have their own brand of quirkiness that they pull off with effortless cool. I first caught up with Joel, Dan, and Martina while they came through Chicago on tour with The Knocks – performing at Chicago’s Metro Theater. The night proceeded into a wild jaunt of $1 PBR’s at a night club/drag show until 4 in the morning. It was a fantastic first impression of the trio and I have even more respect for them knowing that the image they portray to the public is truly one that exists when the masses aren’t watching.

Dragonette stopped back in the windy city a couple weeks ago opening for the raucous Major Lazer crew and we had a chance to sit down with them backstage at Congress Theater. Watch the video interview below as I chat with Martina, Dan, and Joel about conversations with foxes, stages made of chocolate and Legos, psychiatry, and their music video “Let It Go”.

Dragonette is set to head on tour with The Presets and have released their single “Let It Go” available for free download via their SoundCloud page (peep the track after the jump). And head to Dragonette’s website to see if they’ll be stopping in your town and purchase tickets.