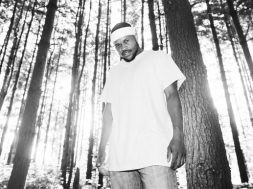 Cleveland, Ohio hailing MC Joseph Holbert — known onstage as Joey Aich — is gunning for the heads of rappers worldwide. On newest single “WeDidntBudget,” the 23 year old up-and-comer refines his timeless, Nas-era aesthetic, stepping further into his own singular sonic landscape. “Laughing at the crib at my bank account” raps Aich, who now resides a few hours south in Columbus, “These statements better pay up cause I ain’t build my resume up.”

Holbert’s masterful lyricism is the defining force likely to propel him into the hip hop stratosphere, but it isn’t always sunshine and roses for undiscovered acts like himself. Equipped with a college degree, Holbert has no plans to enter the business world. Instead, he’s made a leap of faith to pursue his calling; much of his content dealing in the struggles associated with fostering a successful artistic career while trying to pay the bills. “Sleeping on a futon. Shopping with the coupons” he delivers in commanding fashion. At 23, Holbert’s decision to make music isn’t a hobby, its a make or break moment.

“WeDidntBudget” offers up a poignant chorus, Holbert’s augmented tenor reminiscent of Danny Brown’s chaotic verses on Atrocity Exhibition. “Never on schedule but always on time” he sings. The track is Holbert’s most forthright effort to date, and further solidifies him as a force to be reckoned with moving through the new year. Hip hop fans certainly need not miss out on his upcoming album, release date TBA.