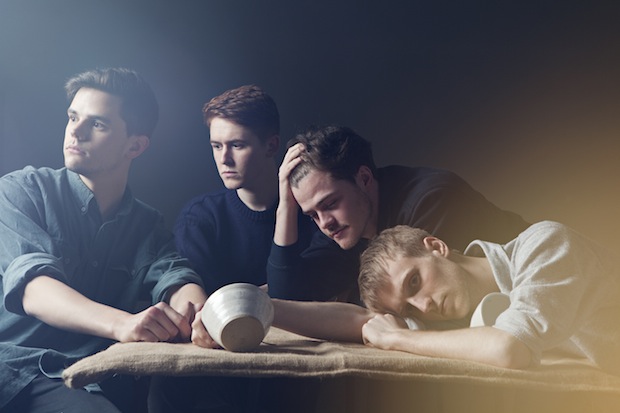 Upon completion of my first listen to Gist Is, the début album from Leeds quartet Adult Jazz, I thought of Giorgio Moroder. Of course, there was the period where I tried to digest what I had just heard, but as the dust settled in my mind, there was the figure of Giorgio, uttering the words he spoke on Daft Punk’s most recent record, Random Access Memories: “Once you free your mind from a concept of harmony and of music being correct then you can do what you want”. Moroder’s disregards for the constructs of disco led to the seminal ‘I Feel Love’ and a series of collaborations with Donna Summer that still to this day remain visionary. But analogous to Moroder, Adult Jazz have freed themselves from the constructs of what guitar-based/indie music should sound like in the 21st Century or how it should be formed. And with Gist Is, they have created something special.

At fifty-one minutes, spread over nine tracks, Gist Is is a daunting prospect for any listener. With many of the tracks either touching or going beyond the five-minute mark, one does initially question how attention will be kept. But within the opening minutes of album opener ‘Hum’ those reservations are replaced with intrigue and wide-eyed wonder. ‘Hum’ opens with a mournful organ and lead singer Harry Burgess’ falsetto vocal – a bleak contrast to much of the joyous instrumentation that is found on Gist Is – but is quickly joined and replaced by pitch-shifted vocals, R&B grooves and horns. The freeform nature of ‘Hum’ is a signal for what is to come over the next fifty minutes. Throughout Gist Is instruments come and go as they please. ‘Idiot Mantra’ for example has bursts of frantic guitar noodling, while ‘Springful’ cuts playfully into reverse samples, and ‘Donne Tongue’ has on occasions aggressive, wonky instrumentation. And each track finds itself meandering with playful intent and jam-like quality. At times a track may be sparse with just Harry Burgess’ vocal inflections propelling songs, while at an instance they burst into life, brimming with a variety of sounds and textures – ‘Spook’ being a prime example of this approach to the construction of the songs on Gist Is. Each and every one of these tracks are free from the constructs of traditional song writing and are permitted to explore the creators’ impulses, without becoming self-indulgent.

With arrangements seemingly coming and going as they please and ideas bulging from the seams, Gist Is is at first difficult and surprising. But with repeated listens, there is so much to be discovered, while a sense of loving familiarity grows slowly but surely. But this “difficult” nature of Gist Is does not mean it is adverse to hooks or cues that nestle in the listener’s mind. ‘Idiot Mantra’ is one example where the band employ repeated refrains – “been humming that idiot mantra for so long” – and there is plenty here to sing-a-long to or bellow at the top of your voice. And although Adult Jazz have created a record that deserves to stand upon its own merits, there are multiple references for the listener to find or make. The vocal work, for example shares similarities to Alt-J, Grizzly Bear or Dirty Projectors, while the sparse arrangements are akin to those found on These New Puritans’ gorgeous Field of Reeds.

Lyrically and thematically, there is also much to explore. Although at times hard to discern what exactly lead singer Harry Burgess is singing, there are strong themes of religion, home and morality throughout the record. Like Ezra Koening’s musings in Vampire Weekend’s modern opus Modern Vampires of the City, Adult Jazz’s relationship with a higher being or an authority, be it the police or organized religion allows for some of the record’s most mysterious and interesting lyrics. This conflict is immediately established in the opening lines of record opener ‘Hum’: “the police are gonna wound me/the minister will heal me/but I think he’ll do it equally violently”. This idea of “healing” is just the first of many grand spiritual references that resonate throughout the record, acting as catharsis to Burgess in tackling his relationship with a higher presence. Throughout, there are references to a “supersoul”; self-sacrifice; 17th century poet and cleric John Donne; doubtful protestations of God “loving the aching ones” and his questioning of whether he is in fact “an aching one”; and then finally rebellion against a higher being – “I write these songs to trick God” – in ‘Spook’. That line especially provides an interesting dichotomy. Is Burgess directly talking to/about a traditional higher being i.e. God? And with it, reveling in his rebellion and his free will. Or is Burgess breaking the fourth wall and confronting the listener? For a higher being or a “God”, as written in many religious scriptures, passes final judgment. While, the listener of a record also passes a similar ‘final judgment’ regarding its inherent quality. Thus could Burgess be dropping hints for the motives behind many of the labyrinthine works found on Gist Is – to constantly “trick” the listener.

Even with all its shining moments, Gist Is is not a perfect record. ‘Like a Girl’ may have been one experimentation too far, and is the first full misstep on a record, which up until that point had very few flaws. Amusingly, Burgess recently said that he did not want his work to smack of “academia”, and spoke articulately on the subject of so-called “intelligent music”. While, I can see the irony of his words regarding academia and the analysis I have provided in this review, Burgess himself has said he quite enjoys the conceptual side to making music. But also importantly, he mused on the idea that “intelligent” music comes from “thought and care” rather than an external element. And with that in mind, I would wholeheartedly argue that Gist Is is “intelligent music”, because even in its playful, jam-like state, it is a thoughtful, measured and most importantly wondrous record.