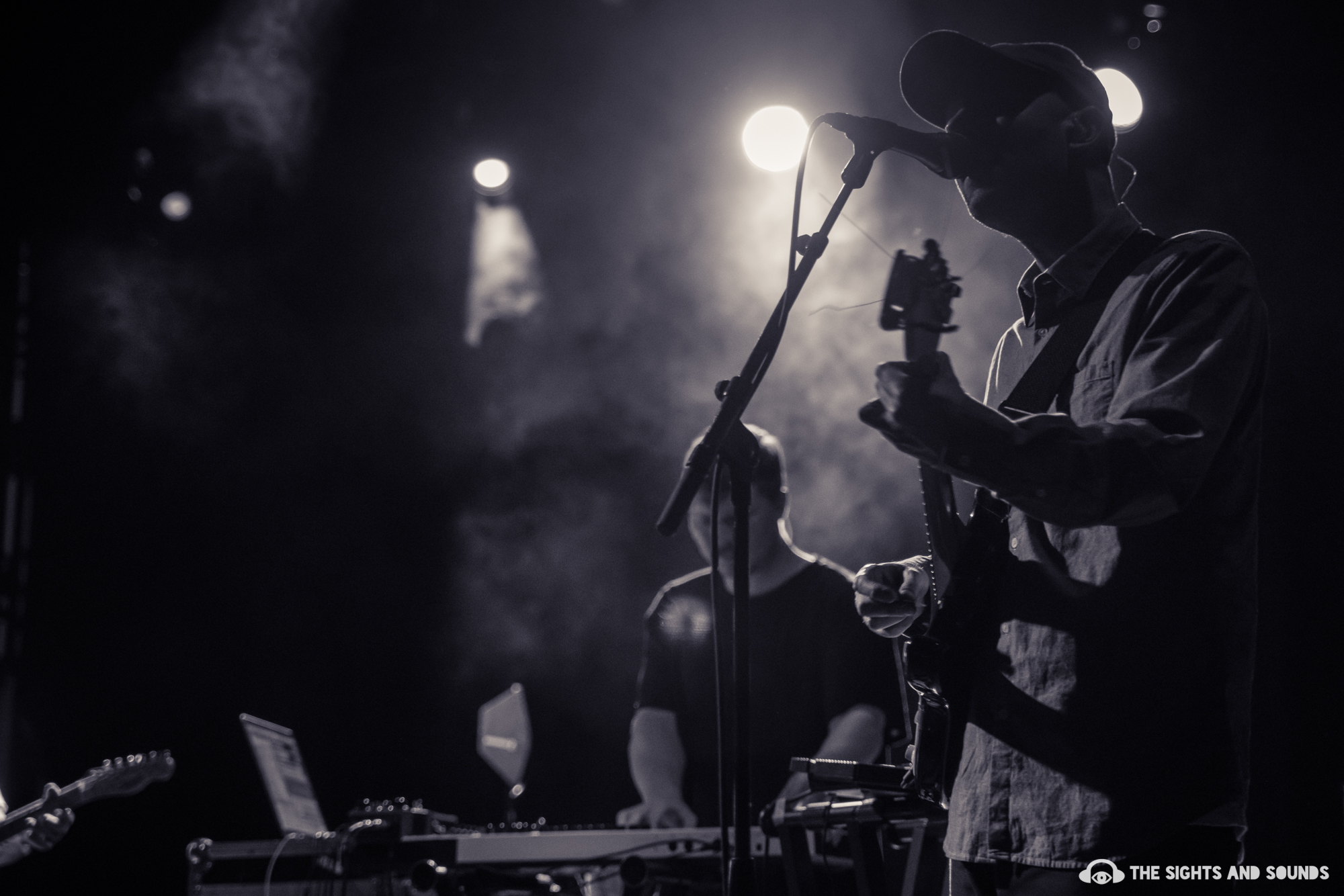 Remember the days of tuning into AM/FM stations and glueing your ears to the transistor radio? Listening to The Radio Dept. live is kind of like that.

Not old enough to recall such ancient radio technology? Me neither, but my parents talked about it and well, we’ve seen movies. Nevertheless, imagine a fully immersive and aural affair of the senses, commanding you to move from the inside out, but everything that moves remains inside. It’s a romantic rendezvous of sonic waves entering your pulse, and the body wants to feel it all. Motion goes numb and the only urge that remains is a frozen desire to stand there, close your eyes, and listen.

Swedish pop duo The Radio Dept. checked in at the El Rey Theatre in Los Angeles, CA this week for a show and straight up…we had our minds blown. In order to provide some perspective, you ought to know that this began entirely as a case of exploring new music. How did it end? It didn’t. It only began.

Knowing little about the band we went in blind and offered our undivided attention, from ears to eyes and beyond. We got there early – as to make sure we caught the opening acts – and walked our way towards the middle-front. We hardly left our post. While Kris ran around shooting photos, I lost myself in the music. Standing there like a soldier, but somehow at ease without direct orders from a captain.

Might I remind you that all three bands that performed Monday night were entirely new to us, which offers such a remarkably honest and inspiring mindset leading up to an event. Expectations are absent (for the most part) and the canvas of assumption is blank. You can’t be bummed that “they didn’t play your favorite song” if you don’t have a favorite song (yet)! *wink wink* So you could imagine how intently we zoned in when each performance graced the stage. 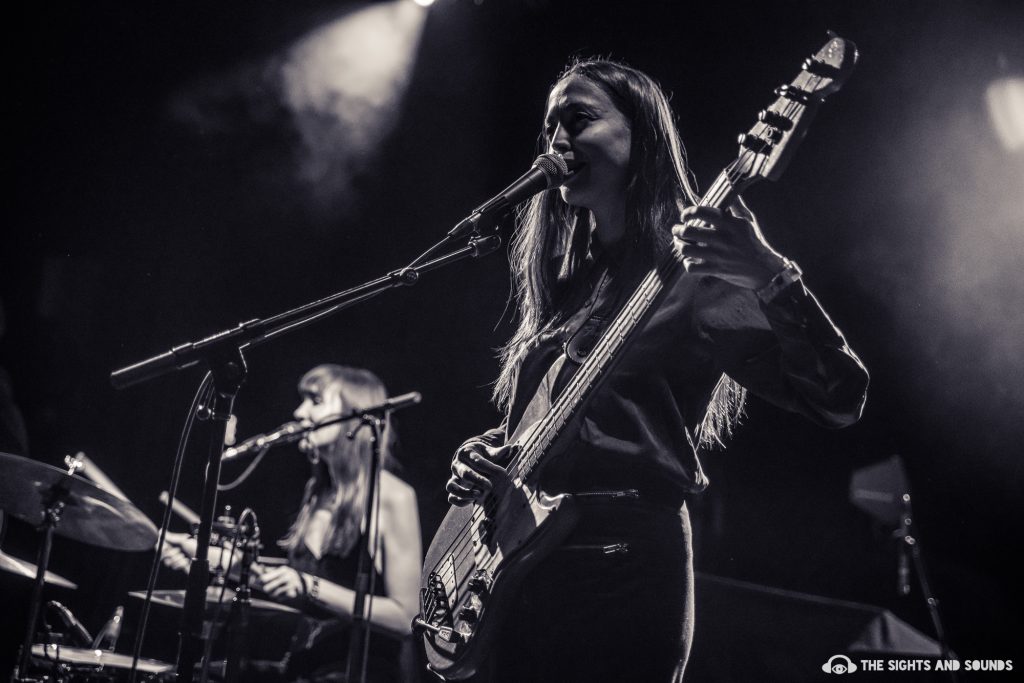 Tashaki Miyaki swayed onto the stage and marked their territory as the first opening act. A quaint three-piece band with the lead singer on the drums – a bold and respectable choice that I don’t see much of. Not knowing what was ahead of us, Tashaki Miyaki played an integral roll in the evening because they afforded the initial sense of what kind of music we would be enjoying.

I overheard someone among the chattering voices after the set say something that was so spot on and oddly poignant: “That was…nice.” The relaxed exhale and brief pause made it clear that there was absolutely nothing negative about their comment. There was really no better way to say it in that moment, and we were truly happy to have arrived early enough for the entirety of Tashaki Miyaki’s soft, sweet, lyric-rich music. I glanced over my right shoulder as they finished playing and noticed how the crowd had thickened. 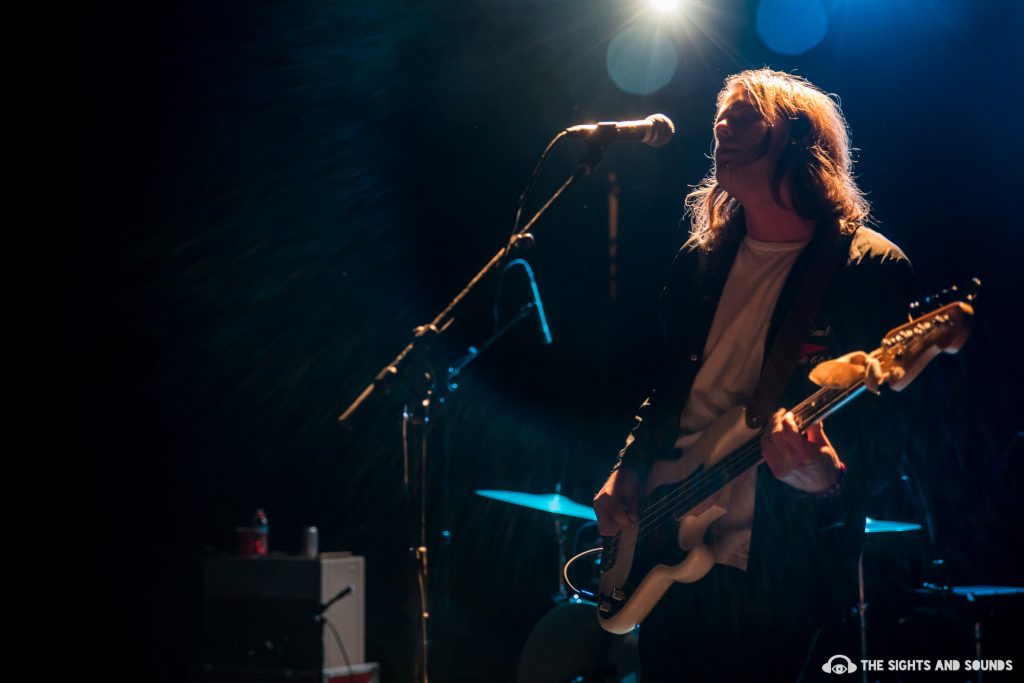 Next on the bill was another trio holding it down for three-member bands; they’re called the Goldensuns. And let me tell you, their beaming ethereal presence bore a similar fascination to that of staring at the sun. You want to stare straight directly at it, but apparently that’s bad for the retina, so you close your eyes. Behind the darkened curtain of your eyelids is a resonating soundscape, vibrant and no longer dim.

The bass-driven rhythms of Goldensuns music reminded us that we haven’t been attending enough live band shows. Though I was compelled to move, all I could afford was a gentle sway back and forth – an authentically mesmerizing feeling that seemed to overpower everyone around us as well. They joined simple and sentimental lyricism with the dark, amorous tone of their music, in turn creating an actively dazed response as a listener.

“I’m just so tired of you not being in love with me.”

It was only after the show that we discovered the makeup of the Goldensuns. Though the guitarist and drummer bare a striking resemblance (I thought twins even), for some reason it never crossed my mind that any of them would be related. Wrong. Goldensuns is comprised of the Meier brothers, founded in their hometown of Salt Lake City, Utah and currently based in LA. My lasting impression of these dudes continues to shatter walls and leave me smiling endlessly. One might think that brothers wouldn’t open up to each other on the emotional front, but these three make music together that shows no restraint from despair or weakness. Goldensuns, we think you fucking rock. 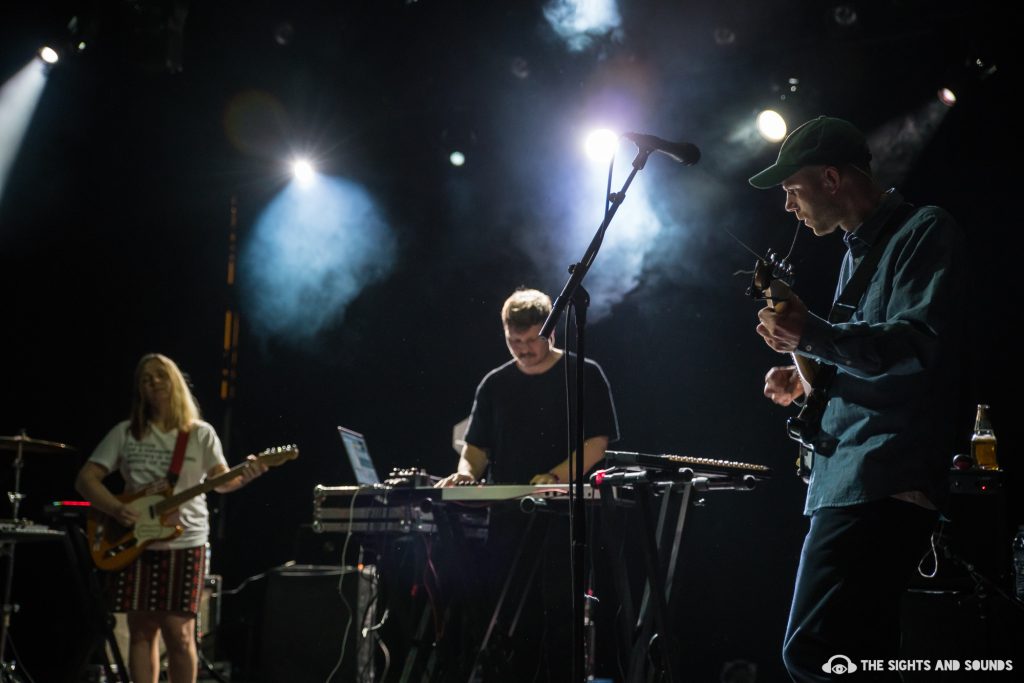 Don’t you worry – we came here to see The Radio Dept. and that we did! It’s just that everyone who set the stage for the Swedish pop group simply did not disappoint. Hailing from Stockholm, Sweden, the duo had a phenomenal arrangement of layered musical bliss that was only aided by the opening bands that unfolded in front of them. I mean that both figuratively and literally. You’ve seen it before. As each band completed their set, instruments are peeled away and a new layout is unveiled.

The Radio Dept. spoke without words and spawned melody from silence. Heavy bass lines and electro drum patterns emitted much of that ‘motionless movement’ described earlier. Everything inside stirred and oscillated, yet somehow, the music kept me still. Having revisited their fourth LP Running Out Of Love post event, the lyrics were much clearer to me as someone who was unfamiliar with the words during the show. They write for a cause and delve into the existential falters of our being and it’s almost as though without hearing the lyrics the music expressed just that.

Allow this to be an attestation of pure musicianship and nothing else: despite my own personal trouble hearing the vocals in their live performance, The Radio Dept. really didn’t even need audible lyrics in order to rapture an audience. Their stage presence and the mere sound of vocals atop a vivacious sound was beyond captivating. In fact, something in the way they were placid on stage made it so the music carried every last measurement of emotional weight. Everyone performs differently, and The Radio Dept’s tranquil style conveyed turbulent emotion in an unspeakably beautiful way.

Get their music on iTunes

Casual Male Is All About “Time, Wasted” In Catchy New Single

tags: committed to the cause goldensuns Indie indie pop indie pop rock swedish guns tashaki miyaki teach me how to forget the radio dept the sights and sounds

0
0   0
previous Casual Male Is All About "Time, Wasted" In Catchy New Single
next The Funk Hunters "Turn Down The Silence" For Summer Romance