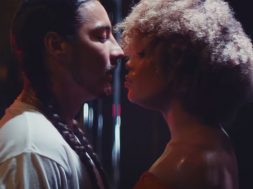 This is set to be a big year for Towkio.

He just announced the February 16th release of his upcoming album WWW. Released through Republic Records and produced at Rick Rubin‘s Shangri La studio, WWW will be the first release since his .Wav Theory mixtape in 2015 (also a tasty treat not to be missed).

Simply put, “Symphony” featuring Teddy Jackson is the kind of track that will likely stop anyone in their tracks, or at least get a good 0l’ rump shake out of them.

Its dynamic and sexy-yet-playful quality is infectious worthy of tapping that ‘repeat’ button. Just as the track title states, “Symphony” certainly leads with a commanding drum beat, but incorporates an element of Soul Train disco and jazz influences. To top it all off, Towkio’s rhymes flow throughout the track almost as smooth as the game he spits in the accompanying music video.

So sit back and enjoy watching Towkio’s lusty game of cat and mouse with his ladies in red in “Symphony:”

Tamara Bubble Has A Weird Confession To Make In New Single

0
0   0
previous Nathaniel Rateliff & The Night Sweats Leave It All Out There With New Single, "You Worry Me"
next Patawawa Brings An Indie Disco Flair With New Single "Patagonia"