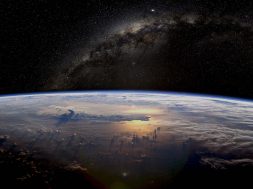 I’m floating away and I can’t find my way back down.

I might end up passing through the atmosphere, finding what’s never been found.

I don’t want to answer – I’m happy knowing everyone is safely below me.

I open my eyes to the stars glinting like city lights in the distance. How many of those lights have eyes gazing upon them from other star runners?

As I start running through the dark of space, a distant voice calls me back.

Could it be you, after all?

I’ll make it back down, as it turns out.

Watch Earth To Spaceman – “StarRunner” below:

“StarRunner” is Earth To Spaceman’s first video off their first album. A shimmering, indie rock release that envelopes me like the warm, summer nights. An ironic juxtapose to the coldness of space, yet invariably drawing me in night after night.

Fronted by musician Jack Matranga Earth To Spaceman released their debut album entitled ‘Cause Célèbre’, which is inspired by the chaotic nature of human connections, daily encounters within American pop culture and social media.